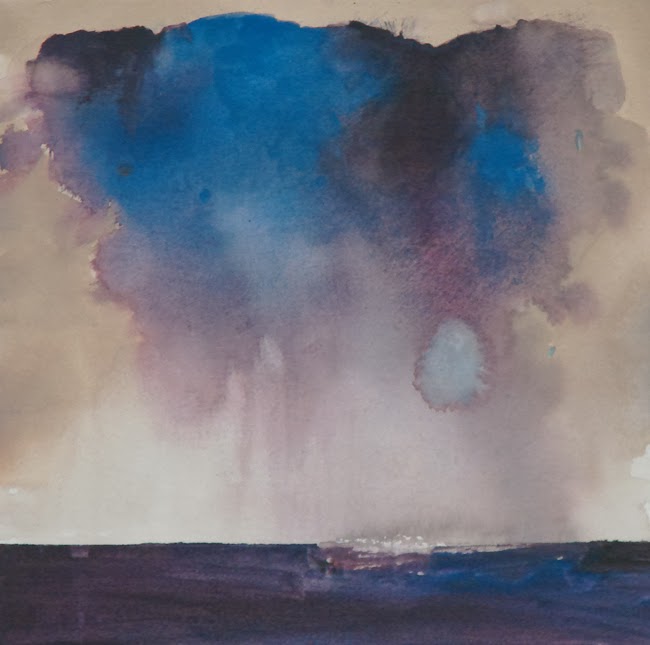 Tonight, after three earlier attempts I had to throw out,  I went back to basics and made another in this elegiac series. Two of my elders died this week and although my involvement with them was years ago, it`s sad. One was my 90 year old cousin Elizabeth who had the courage to be a free spirit when that wasn`t cool at all. The other was my former landlady, Olus Ramsey in New Mexico who lived to be 95. She gave me a beautiful place to paint at a rent I could afford just as I was starting out as a painter at 23. Joseph Campbell said when you follow your deepest desires, doors will open where there were only walls. She was one of those doors.
So I`ve been painting badly for a couple of weeks now. The well is dry. I don`t know why but it`s like something vital was simply shut off. I`m annoyed but not too concerned as I realize I have a month of total painting immersion coming up on the coast. Still I keep trying, that`s what I do but I`m not getting anywhere. Tonight, those departed ladies are in my thoughts as I`m ripping up wet paintings and I begin yet again. My brother Mike has given me a CD he wants me to hear. He kindly and patiently sees that I have beautiful music to listen to. I don`t even remember the name of the group but I put it on and immediately go to the first track he has noted as the best. That song isn`t half way along and I am standing over this painting, brush in hand, weeping. It doesn`t stop soon.
Music will find the sore places and clean them.

I'm so sorry you are grieving, but it will heal and change and all art helps with that. Perhaps this isn't time to paint things, but feelings? Love this painting - and the water blossom in the sky :) It's funny how we miss someone and that missing never goes away, sometimes feeling as fresh as the first day of missing them, knowing there is no more chance of talking or visiting. I've been missing my grandmother a lot lately and she passed in 1990. I always say her passing affected me physically as that's when I first went to the doctor for a heart that felt like a jumping frog in my chest and found I had mitral valve prolapse. So losing her broke my heart, in a way that stays with me today. Mourn and grieve and cry - and know that the pain will lesson and the painting will grow with those feelings. Big HUG for you today!

I'm sorry people who were special to you have passed. It's a time of long reflection. Sounds like you are very aware of there good impact in your life...it's wonderful when life gives us these "angels".
I do like your small watercolour...makes me want to start my day with a moody juicy painting.
Thanks Sheri

It is a wonderful gift to care so much... and I think that your sea cloud watercolor echoes your sadness. That's quite a gift also. Before I knew about your personal sorrow, I saw the painting and thought that it was deep and special.Thanks so much for your fine work.

The passing of elders. It is so natural, yet wrenching. I hope your painting and healing at the beach go well. This is a beautiful image, and worth the ones that didn't make it. *Big Hug*