new revolution and an Anniversary


The week before I was practicing and this was one of those pieces. I wanted my demonstration at the White Bird Gallery to be credible. It was an 'event' in the first Earth and Ocean Arts Festival which was timed to coincide with last weeks Climate Strike.
Somehow, somewhere deep in our collective psyche, something turned. Did you feel it? 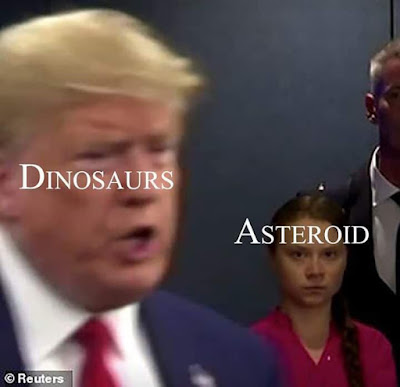 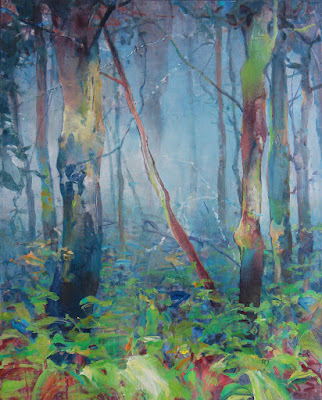 
This was the demo I began at the gallery. Below is how it looked when I stopped for the day. 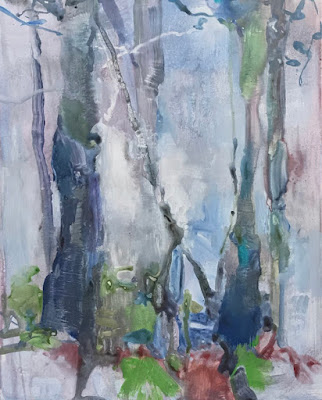 Believe it or not, I thought it was really promising when I concluded.
A reader of this blog asked me to record it live on Facebook. She said it was easy and it was. I taped my phone to a tripod and commenced painting. In my last post I mentioned I would try this so there were some viewers waiting. I chose a generic northwest forest as my subject because the motif is familiar. I learned the hard way to do something without too many surprises when demonstrating. Nonetheless, right from the start I had a major change of plans. Yupo has to be handled very carefully. If you touch it bare handed the oils on your skin will leave an area that resist the paint. Knowing this, I cleaned the surface carefully the night before. To no avail. My first strokes seized up as if I were painting on a waxed floor. The whole surface! The show must go on so I got out some acrylic medium to mix with the watercolor and squeezed out acrylic paint all around my mixing palette. This would have to be an acrylic painting. Improvisation is what I do and disastrous experiments are common in my studio. This time I just had an audience.
Rather than having to figure out how to verbally explain my actions, I like it if I have questions. Christopher Mathie sat close by and we had a nice conversation while I painted.
It is saved on my Randall David Tipton Studio page. If you take a look, two other videos show up first. They were done very crudely in my studio. Someone who had been watching earlier wanted me to proceed with the demo painting, so I tried to oblige her. I couldn`t find an option to just take a video, only one that would broadcast live. That would be ok I thought, no one knows I`m doing it. Wrong! Soon I was getting comments and some complaints about the lighting and hearing from people I had not had contact with for years! Sarah Peroutka watched it from her sleeping bag while camping! It was a real mess but also kind of fun. 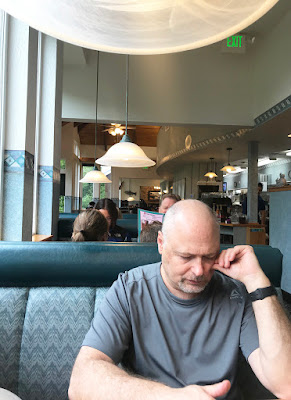 Big thoughts at Pig and Pancake


That is my husband John.
Twenty years ago I answered his personal ad on Yahoo. The whole online dating industry was still many years away. We had a long funny talk on the phone and agreed to meet at a Starbucks near his home. I had seen his photo and he was not there when I arrived. Considering  myself a good judge of character, I was surprised. After waiting twenty minutes I asked the barista if there was another Starbucks nearby. He said 'oh yes, right around the corner'. Soon I saw him sitting in the sun and there, for the first time, he said 'you`re late'.
Within a few months he had a key to my apartment and I began to notice his stuff in my closets. I`d come home from the restaurant late in the evening and he would be there. My experience with healthy romantic relationships was zero. But I had been diligent in pursuing why in therapy. When he sprang off the couch to clean up my diabetic cats vomit, I knew he was a keeper. They bonded before I did, also a good sign.
So we count our time together from the day we met. Twenty years ago there was no cultural recognition of our kind of relationship. No rites of passage or celebrations except for the ones we created ourselves.
Any marriage is a leap of faith. When they hold, over and again, it is so humbling.
That man reading his phone while waiting for breakfast is exactly who I want. 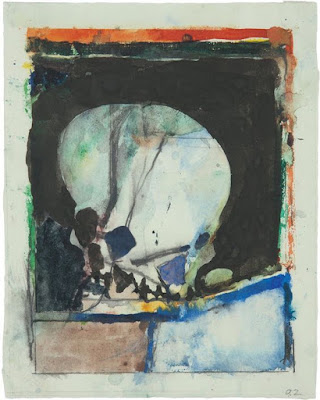 
That is one of his last works, painted shortly before his death.
If you like his influential work, here is a wonderful essay by Diebenkorn`s student Tony Berlant. [He is phenomenal in his own right] 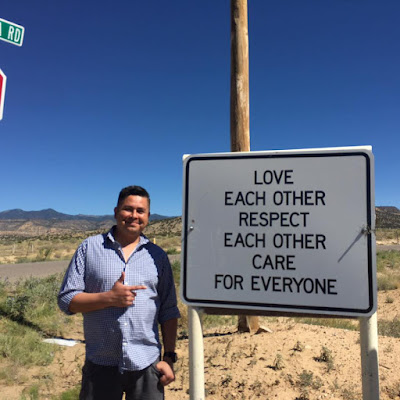 From Laguna Pueblo, photo of her brother by Miriam Marmon


Click HERE for work for sale in my studio

Happy anniversary! I see we have something more in common (Rich and I have been together for 21 years). I met my husband in the same way through AOL personals. Marriages (relationships) are a kind of miracle.

I read Tony Berlant's article. I liked the idea of a change in environment leading to a change in the work. I think that is true in many ways.

I missed the whole demonstration event but can appreciate the work it must have taken-the technology curve, the pressure to show something useful and grappling with materials. It sounds like you did well.

It's funny but when I am in a forest setting and everything seems green, the light to me is always blue. You capture that idea perfectly for me!

Thanks again for the post-always good reading.
Libby

I'm happy for you and John, that you've made a life together. May you enjoy at least 20x2 more years.

Hi Randall, I chuckled at your setting-up of the video at White Bird as you peered around the corner, assessing the camera placement and commenting with the audience. I wish I could have been there because I learn so much from watching you paint. The finished work is wonderful. It proves once again that you've mastered your materials when you know just how to approach the Yupo's oiled surface and not be flustered. Thanks for the link to the essay about Diebenkorn. It's a good one. personal. You're a good one, too.

First I gasped, knowing full well that awful feeling when you load the brush, touch it to Yupo, and nothing.

Then I felt tears in my eyes reading about you and John. You are both so lucky.

Love to you both.

Happy Anniversary! What a lovely story.We are the lucky people, those who find each other.
Your painting 'Overgrowth' is so beautiful, I love the dimensions - want to just walk into it.

It is so hard to hold onto each other and I am so glad you found your true love and can acknowledge that every day. Keep going strong, guys, and keep the good things (including love, compassion, painting, creating, sharing) going around. Happy 20th!!
And I did watch a bit of the video, Randall, just because I wanted to hear your voice :) I will watch the others later but now feel pressure to start my online course (since I am a day behind already although there is no pressure on me except from me!!). Take care.