Jackson Bottom and the End of Summer 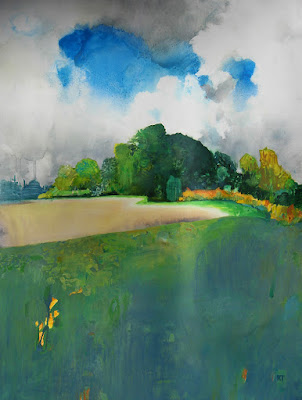 
I was delivering a painting to Hillsboro for transport to the International Society of Experimental Artists annual show, this year in Newport Oregon. And the wildlife refuge, Jackson Bottom, was nearby. I love these places. There is hardly anyone ever there and those that are, are birders! Such lovely people! Because it was late August, the refuge was dry as a bone. The pond I painted [above] was dry and had only a living green rim that suggested moisture. Still, on a summer day made bearable by passing clouds, it was magnificent; 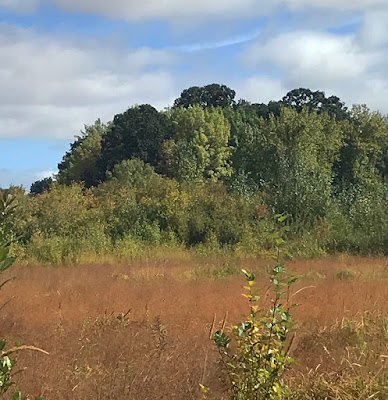 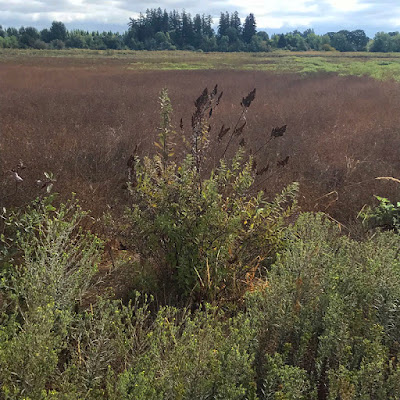 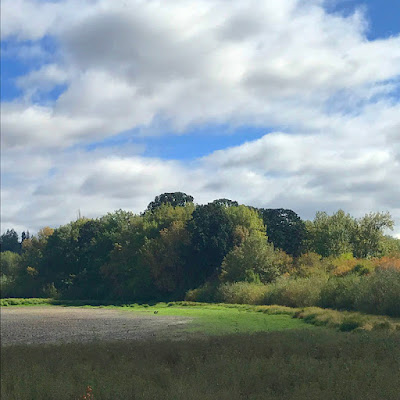 The show in Newport had an interesting angle. Applicants were asked to explain how their piece was experimental. This text would be posted next to the accepted entries. Mine was a watercolor painted as if I were the painter Bjornar Aaslund of Norway. I was trying to figure out his fusion of abstract expressionism and landscape painting. Oddly, it sort of worked. Just changing my palette alone provided some insight. You can see the entire exhibit here.

H2O has opened at Ferris State University of Michigan in Big Rapids. The brave curator saw my work online, could see the importance of water in much of my work and included me. 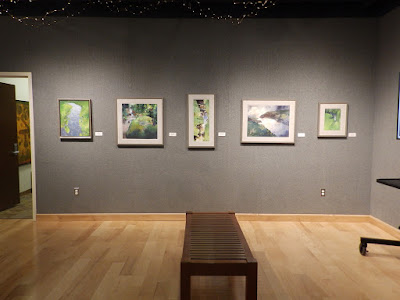 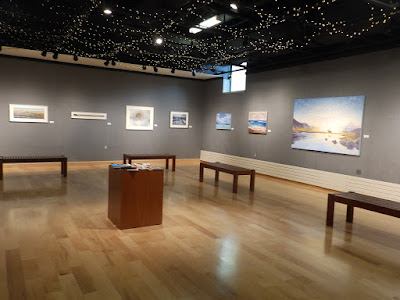 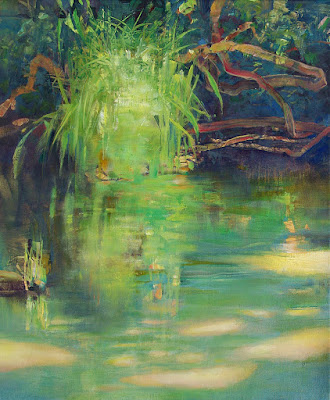 
The smoke had finally cleared out and the summer everyone yearns for was back, but only for a few days. The transition is often abrupt and this year especially. It was still August! The population has experienced true grief. Some hold out hope for that 'Indian Summer' but the sunlight is too angled now, the days too short. Our great fear is that every summer now will be one of massive forest fires. To those climate change deniers, you will breathe the same smoke as I do. My rage and disgust with the Republican Party make me choke for words, but listen to Harrison Ford. At least an actor can hold it together to speak the truth. 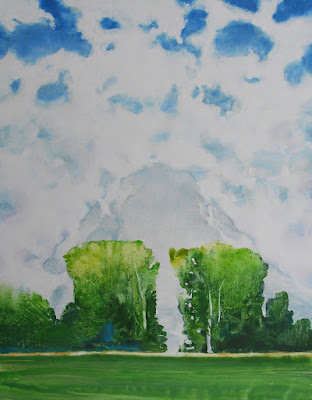 The Mountain from the Train watercolor on terraskin 14x11

From my great train ride to Seattle last month. 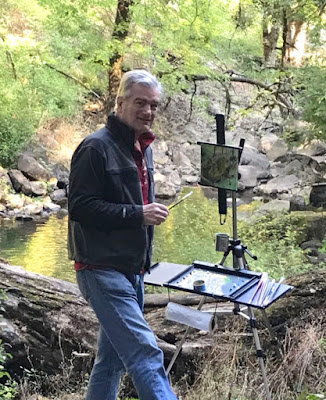 
To anyone reading who is not an artist, I suspect you too know of this rapidly expanding phenomena called Plein Air painting. Doing it outside. Rain or shine for some. Here are some profile essays on the joys and frustrations. Made me want to do more again next year. 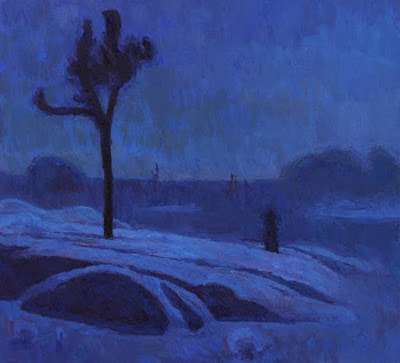 Caravan of the Moon by Eric Merrell


Speaking of on-site painting, Eric Merell, a painter I`ve admired a long time, does so in a most original way. Here is a wonderful little video of an artist in residency he did in the desert. This guy owns Joshua Tree. 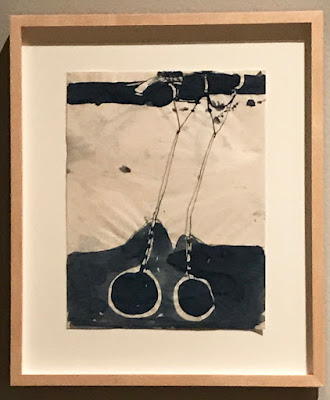 
Still another nine days to see the show of early work by the revered artist Richard Diebenkorn at the Portland Art Museum. I wasn`t going to see it but my brother Mike thought differently. I`m so glad I went! It isn`t my favorite body of his work but with the scholarship in the accompanying texts, I learned a whole lot. As is true for most artists, his early career was not easy and with WW2 in process, he had some tough choices. To see the work on paper he did during this difficult time was so sweet. He was a kid!


Only two days left to see the collection of astounding, one of kind automobiles also at the museum; 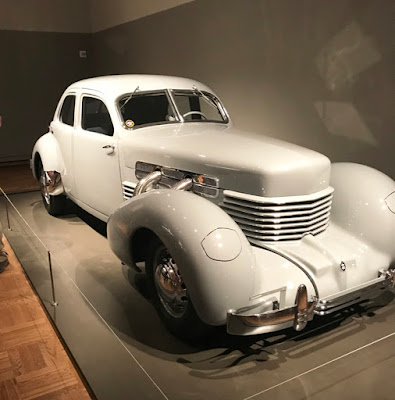 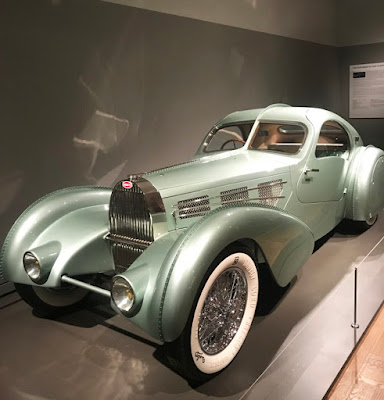 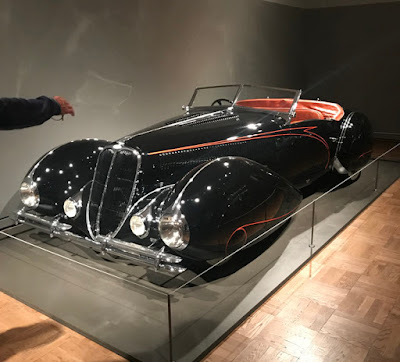 For a long time it wasn`t appealing to paint with oils, I naturally gravitated to water media. Yet I can do the same things in oils, I paint thin and flat. Plus what one puts down in oil paint stays that way by and large. With watermedia there is always an accounting for things drying lighter in value. Basically oil is far easier and the paintings find homes much quicker. Economically, I needed to figure out my reluctance. Then I saw it; 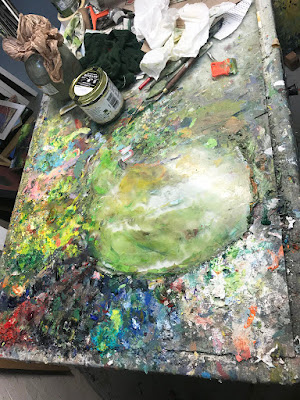 
No wonder! Yikes! The last time I gave it a good cleaning I ended up in the clinic getting stitches in my finger. So I decided to get a new one; 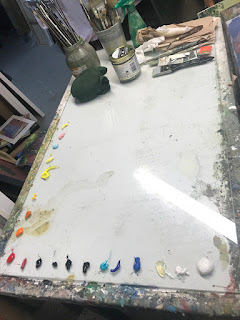 Big difference! And I`ve promised myself to observe how it gets out of control. That took about a day. I paint until I`m tired and then do a half assed cleaning. Well, not the new Randall. Keeping the scraping razor pristine is key. It`s been three weeks and it still looks new. Wish me diligence.


Here is a disturbing photo; 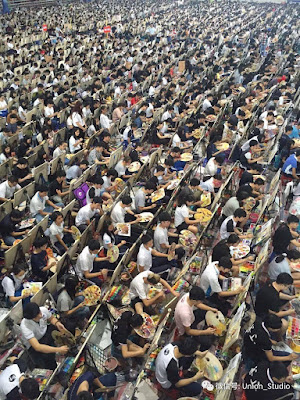 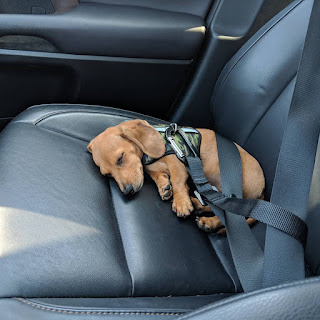