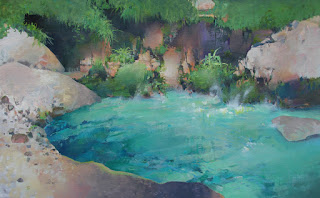 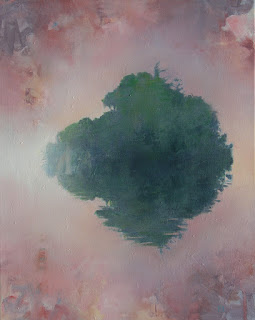 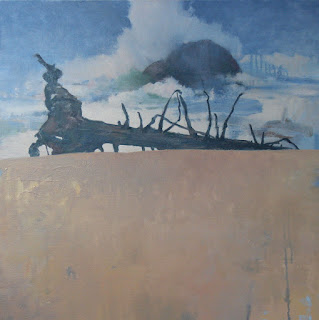 Re-dos. If I live with a painting for a while, maybe years, it will eat at me if something is wrong. I went back into these and made them better. Click below for the original version.
Geothermal Pool oil on canvas 30x48
Estuary Island oil on canvas 30x24
North Shore oil on canvas 24x24

Posted by Randall David Tipton at 9:03 AM No comments: 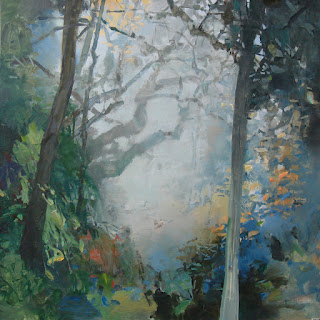 In my studio, after being hopelessly stuck trying to paint the rugged Waimea Canyon in Kauai, I surrendered and came back home to Iron Mountain, where I`ve walked a hundred times, not just once.
This past January I realized I had been running for 40 years. My brother Tom said it was fun so I gave it a try. In hand me down cowboy boots, I would run to the mailbox a half mile away on a dirt road to the farm where I was living. Being 19, I got into shape quickly. It has been the most reliable companion helping me through serious depression, addiction, near poverty*, broken hearts, and deep grief. It has always given me hope.
I ran yesterday in rainclouds, literally, and it was so beautiful it made me grateful for my life. What a wonderful experience it is to be thankful and not yearning as usual. Age and loss seem to be coaxing me to let go and accept the deal; no death, no life, it`s that simple. Take every day for the gift it is.

*self inflicted, I could have always worked more but I wanted to paint. Completely different from true poverty

Posted by Randall David Tipton at 2:00 AM 4 comments: 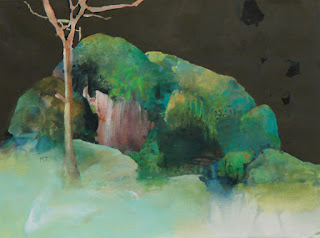 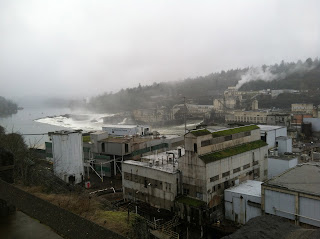 Between deluges I painted on location the other day in historic Canemah. This is the place where Native Americans and later, settlers got out of their canoes and boats and walked them around the falls you see in the photo. We painted near the cemetery in an open meadow on a basalt bluff overlooking the Willamette River. I was almost done with the rock when it started to mist. Needing to work fast, I got out some ink and blacked out the background and squirted some liquid white acrylic in the foreground to simplify it and called the session over.
watermedia on paper 9"x12"

Posted by Randall David Tipton at 3:00 AM No comments: 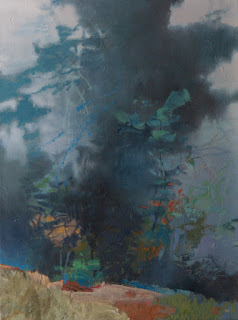 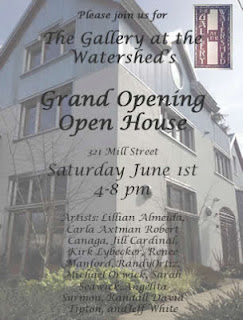 Most Northwesterners would strongly disagree, but I think winter is too brief. We have a little autumn color into the new year and by late February, swelling green buds. The stone dead dormancy is over in a moment. This painting comes from my walks on Cook`s Butte  here in Lake Oswego. It`s only a few hundred feet high but in winter it`s often in the clouds.
The Grand Opening of The Gallery at the Watershed in Eugene is Saturday June 1. The architecture alone is worth a visit, the art is 'real', and in four hours, who knows what will happen.
I will be part of the Portland Open Studios the second and third weekends in October. Please come visit.
A lovely woman from China bought my mother`s painting!
Draw and paint with me in my workshop during Create Eugene.

work in my studio
[nice new Flickr format]
Posted by Randall David Tipton at 10:00 AM 2 comments: 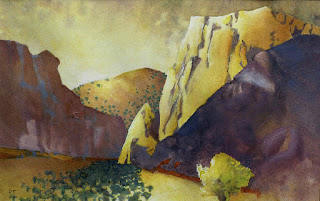 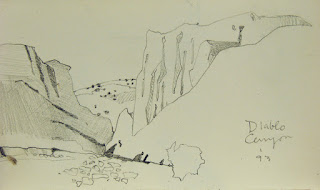 When I teach in Eugene in August, we`re going to sketch on location then paint from those drawings back at the gallery. This is how I always worked until digital photography came into practice. I would carry tiny sketchbooks with me and do quick notations of the landscape which became paintings, sometimes years later. I`m convinced I was able to do this with so much time having elapsed because of the mental imprint made when I drew the scene. The character of the place still came through.


available work in my studio

Posted by Randall David Tipton at 9:15 PM No comments: 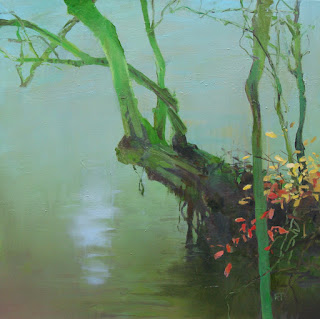 Just like it sounds, a study is usually a 'practice' for a larger painting. Theoretically, this is why I do them. Often, I lose the impulse after painting the smaller piece and the big one never gets painted. Here I did it. This is based on a 6x6 panel I did last December.
I will be teaching a workshop in Landscape Painting from Plein Air Drawings, as part of the Create Eugene extravaganza Aug. 31. The cost is $100 and if you`re interested, please contact The Gallery at the Watershed. In the workshop I`ll harangue everyone, including myself, about the importance of drawing to painting.
The Gallery at the Watershed has been open since April but the grand opening is June 1, 4-8 pm. Please come by if you are able. The owner, Amy Isler Gibson, is herself a work of art and her passion for painting is infectious. I`m so happy to have her representing my work!
oil on canvas 24"x24"

Posted by Randall David Tipton at 8:39 AM 2 comments:

Minto Brown Island nature preserve in Salem Oregon has been the source of many of my paintings.  It`s swampy, funky beauty always satisfies, I just wish it were closer.
I bet if I painted in a duck making a water landing, I could sell it.
oil on canvas 18"x36" 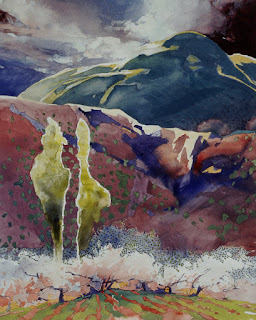 From a long time ago.
Whenever it rained in New Mexico it was special. Occasionally there would be lingering storms with overcast skies for several days. The state is so dry, everyone would  feel relieved and love it. Sort of  like a primal response, rain = survival.
watercolor on paper 14"x11" 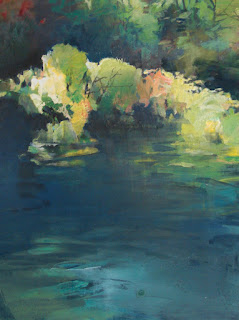 This is a second version of a plein air painting I did last Oct. on the shore of the Tualatin River. I sure love that river, every view I`ve ever seen of it has been gorgeous. Even in flood stage it`s serene.
In the last two days I have moved my mother [with lots of help] into a retirement home, spent a whole evening in the ER with my partner [he`s OK], been rejected for an artist in residency in Maine, sold a major painting, and I just made a killer mango cucumber salad!
Thailand, they know how to eat!
watermedia on paper 12"x9" 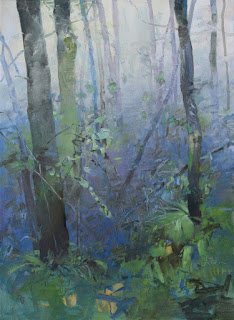 This just came through me, I only had to stay out of the way. I don`t feel successful painting the forest very often. Too much complexity, I get lost! This one seems right.
oil on canvas 30"x24" 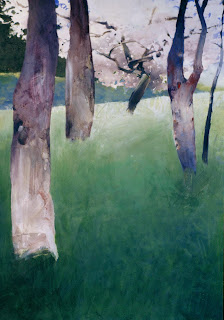 From a drawing I did in Portland`s Japanese Garden.
This story is off topic but it`s a good one. Believe it or not;
In 2006, when it was still legal, my friend Pam was introduced to online slot machines by her father. She`s not much of a gambler but she gave it a go, depositing a small amount in the 'bank' with her credit card. While waiting for her husband, before going out one evening, she decided to play. In short order, she won over $600,000!! Of course she couldn`t believe it so she called her Dad and after hearing the details, he said it sounded real. There was paperwork, taxes and red tape and it took nine days to get the money into her account. On that day, again waiting for her husband, she returned to the website and played again. Within minutes she won! Also over $600,000! Now, she`s sort of terrified and wondering, what does this mean? But this jackpot too proved to be a reality! This where it gets fun, she`s exactly the kind of person you hope good fortune comes to. With her smarts and good values, those funds were going to do things! She invested some, spent some frivolously such as flying her nephews to DC to see the museums, gave a lot away to worthy causes and she bought art. My art. In the fall of that year, she flew to Portland, rented a car and arrived at my house with a mission. She chose maybe a dozen paintings, some for her family members and she pulled from her purse a huge roll of cash to pay for them. That money allowed me to leave an unhappy job and become a full time painter.
She was just here for a visit last weekend. Since junior high in the 1960`s, I`m happy to call her my friend.
watermedia on paper 21"x 14"