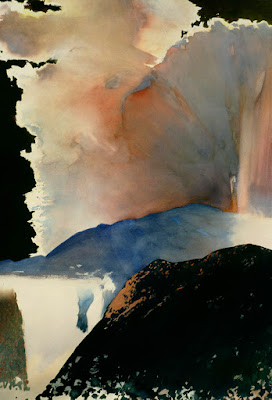 
This is exactly thirty years old. It came from a night drive through the Rockies in Colorado lit by moonlight. I was driving home to New Mexico through the Salida Valley passing one enormous mountain after the other. The whole valley was illuminated by the reflected light from these glowing monsters. Memorable! I had to paint something!
So we in the northern hemisphere just experienced the longest night of the year under a huge full moon. The solstice is a holiday that excites me. Civilization took hold because agriculture was predictable and another growing season always returned. We are as dependent on this cycle as we ever were. The north leans back toward the sun and the world will eat. No life is possible without the sun. That`s a big deal.

Here is a young Navajo girl singing a gorgeous tribute to the solstice. She understands. 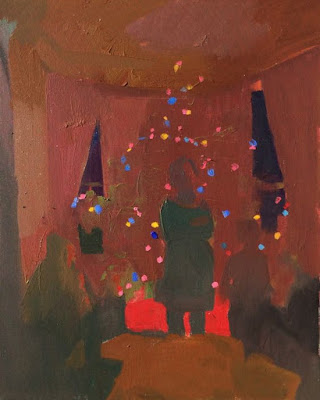 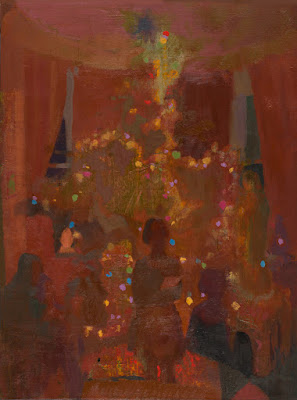 
These two paintings by the inventive, always interesting Emil Robinson, epitomize what is special about Christmas. It`s all about the light. For me these are stunning in their emotional purity. This is what I love about Christmas. When it settles down, when the room hums with color and safety and contentment. Were it so for everyone.

Lisa Pressman is an artist I admire. So when she announced a year end sale by the Multimedia Artboard Co., I was curious, I had never heard of it. One stiff non-buckling board suitable for oils, inks, watercolors and presumably encaustics as that is Lisa`s medium of choice. It sounded too good to be true but it was on sale. So I bought some and had a rough start because of the absorbency but it soon became interesting. The price is right, it comes in some big sizes and I think a painting could be presented like any other oil and not a work on paper. The first piece below is it. Sort of like painting on gessoed rag board. 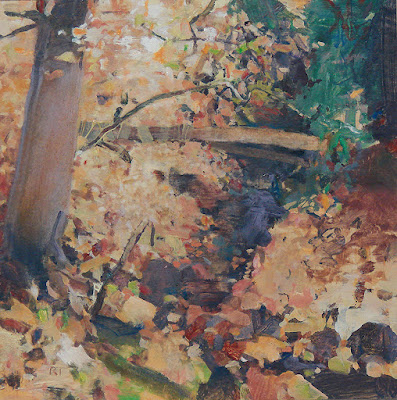 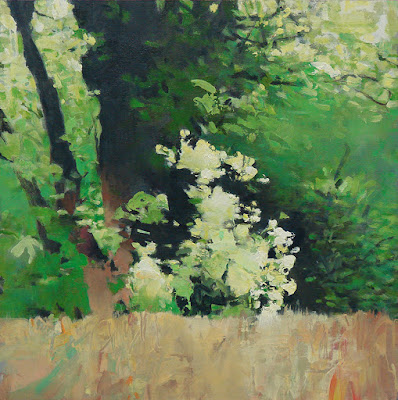 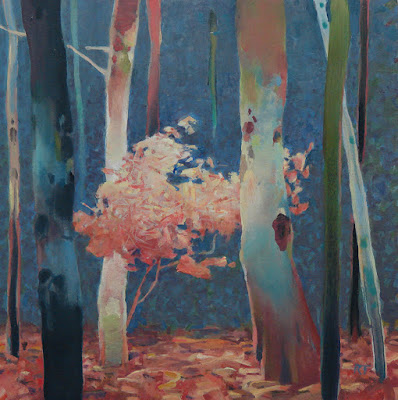 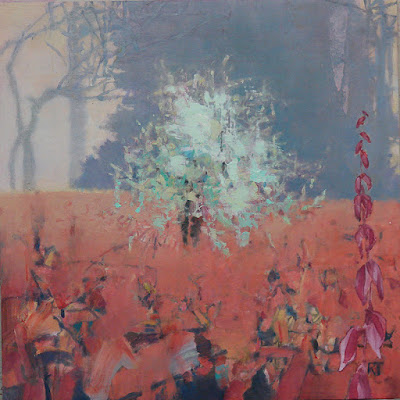 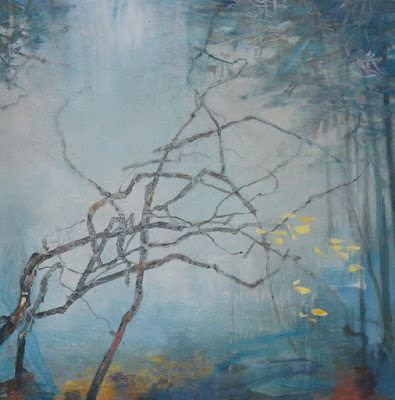 
These are my latest works. I feel ambivalent about each of them so they may not survive. I need to set them aside for now and go on to new projects. I could use an unequivocal success and I know it will only come if I`m working. I couldn`t be more inspired, the landscape is full of mystery and I feel great so forward!

Those of you who are artists, who are trying to build or grow a career, you might benefit from the counsel of Alan Bamberger. He suddenly appeared on a Facebook group I belong to in a discussion about bartering and discounts. He was no-nonsense and practical. I did a little search of his site and found this treasure trove of articles addressing the many conundrums of the art world. They are well worth browsing especially if you have a particular issue on your mind. 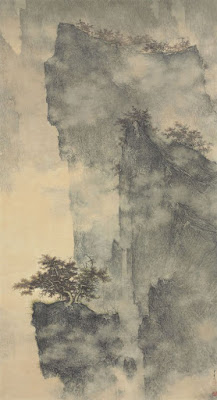 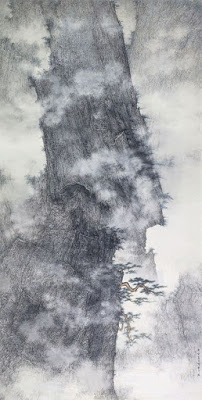 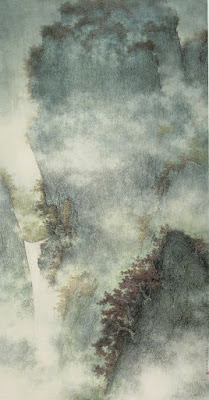 
The ink painting traditions of eastern Asia have called to me since I was a kid. When I saw them in encyclopedias, the simplicity of the technique and the other worldly landscapes got my imagination racing. I think of myself as a watercolorist largely because of this influence. I remember copying them and even tinting the surface to make it look more like rice paper or silk. The monochromatic palette was a comfort and something I could emulate. I still love it though now I can recognize the difference between the Japanese esthetic and the Chinese. Li Huayi, born in Shangai, paints in the tradition of the Chinese masters but he wants them to be distinctly of our present time. I think they are quite different in that viewer is hovering in the landscape rather than seeing it from a place of security. Here is a fascinating interview with him.


As political as I am, I don`t understand foreign policy at all. Yet I`m certain we would not be so involved in the mid-east if it were not for oil. In all the rage and despair over the president ending our engagement in Syria, I sure don`t know what we accomplish by staying. Here is a defense of his decision from the left. Rolling Stone no less! 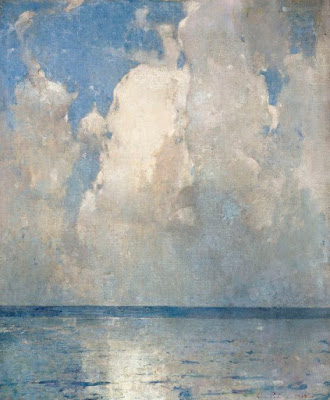 
This time of year, the losses we all carry hurt harder.  The voice of Bing Crosby can buckle your knees. I`ve learned a Jewish expression that can give a little elevation; "may their name always be a blessing" What they gave us rather than what we lost. 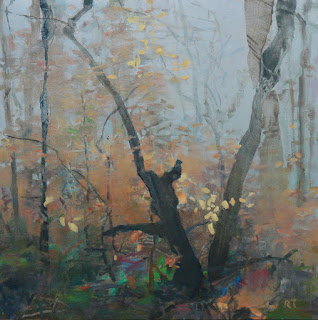 
Two kinds of fog settled upon Cook`s Butte just days after Thanksgiving. Driving below it on Saturday, I saw the dome was obscured by a mist. Walking toward the top, I was soon in a light drizzle. This type of fog is being inside a cloud. The next day it was thicker but 'dry'. Both were impossibly beautiful. Literally everywhere I looked was worthy of painting; 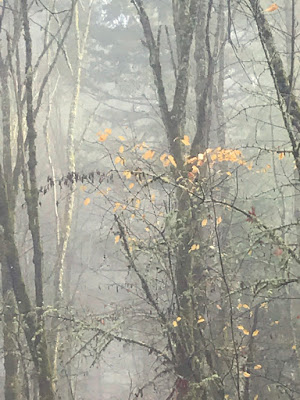 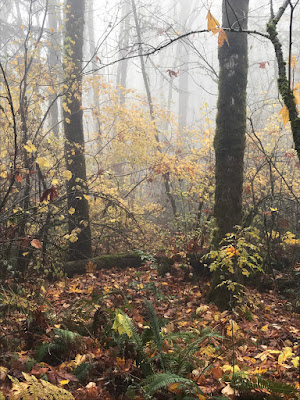 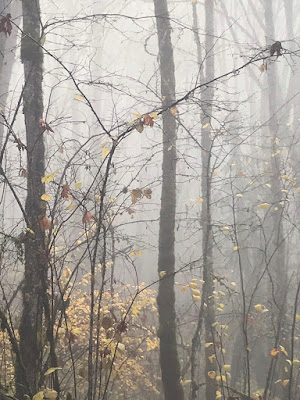 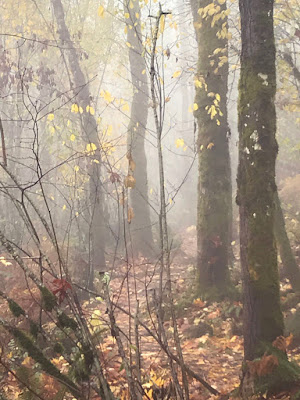 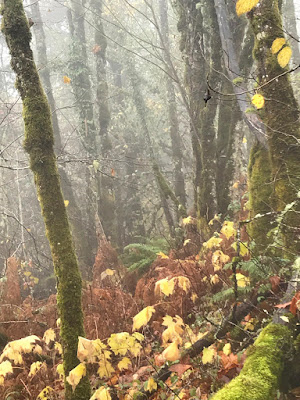 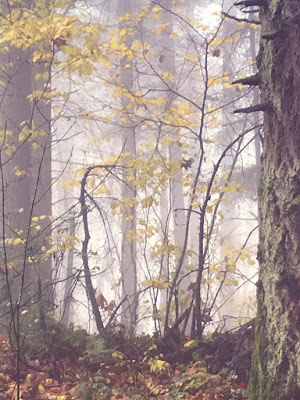 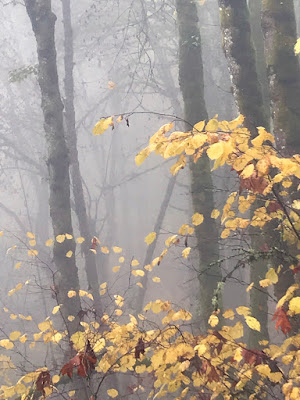 For me, such a visual and sensory feast just makes me want to paint.
That`s where the danger is! How in the world to even get close to such loveliness? Nature even simplifies the task by removing many of the details. The depth is solved before even beginning. Then why was it so difficult? This was my first attempt in watercolor; 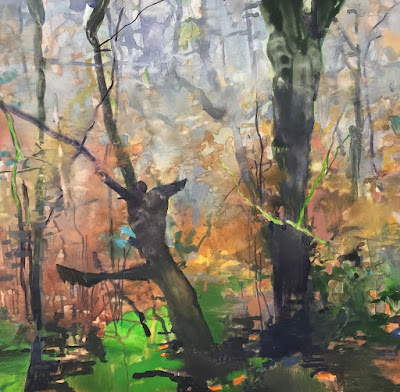 But that didn`t please me so I sprayed an acrylic varnish on it and took it to the oil painting part of my studio. This what I accomplished; 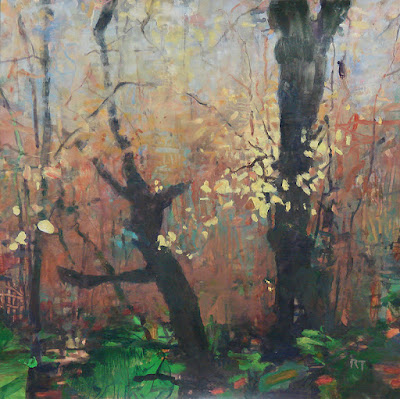 
No, no, no! Too heavy handed!
So then I began the piece at the top of this post. I changed the orientation of the composition a bit and this time began in a much more sober deliberate manner. Inspiration makes one feel so alive, it`s just about the best sensation there is. It sure can create some high expectations which are often disappointingly unrealized. That`s what it`s like to paint. Try and try again. Sometimes I think after all these years why isn`t it easier? Some smarter, better me keeps the challenge fresh by finding new ways to think about painting and the landscape too. I don`t want it easy. Even though people can recognize one of my paintings with a glance, believe me, how I got to the conclusion of each one was a lot different from the other. Knowing that each process was unique, it used to bother me that they could be so quickly identified as mine. Now I`ve come to understand that the human eye is acutely perceptive. It notices characteristics and patterns that don`t even reach consciousness. And the painter is a slave to his body. How I walk, speak, sign my name and wield a brush, it`s all unique to me and others notice. 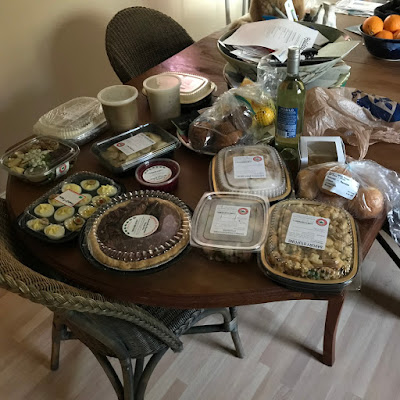 This year Thanksgiving was in my home and just my brother and his wife were with us. I offered to cook anything,
I have enough skills to follow a recipe and I was game for adventure. What I wouldn`t do is make a traditional Thanksgiving dinner. Too much variety! Oh my god, how many millions of moms pushed through their own exhaustion to satisfy the expectations of their families?? Year after year after year! Really, how extraordinarily selfless!
Well I wasn`t going to take up that cross but I would make something exotic. Problem was, we all wanted the real thing.
Portland has an established beloved deli, Elephants`, and I had seen an ad for a package Thanksgiving dinner. We got a few extra side dishes and I will tell you it was Good. The turkey especially. Reheating instructions came with it and we all felt extremely clever and well fed. 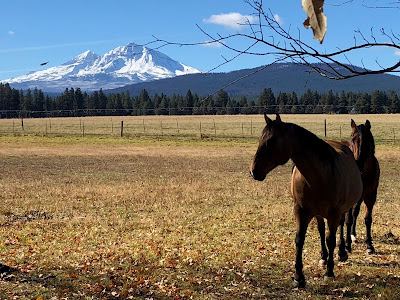 Oregon has a new Artist in Residence program and the incredible Gert Boyle is behind it! Pine Meadow Ranch is now offering all sorts of artists a chance to get some serious work done on the dry side of the mountains near Sisters. Super easy application form and an approaching deadline of Dec. 17 for sessions beginning in March. 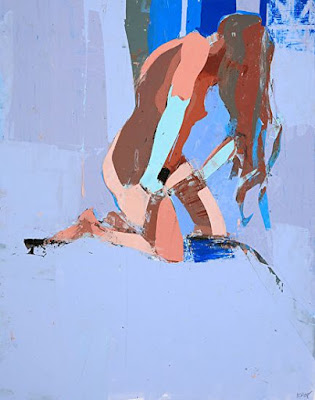 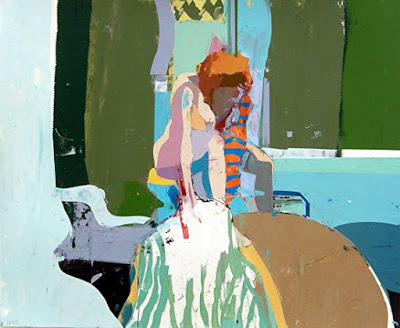 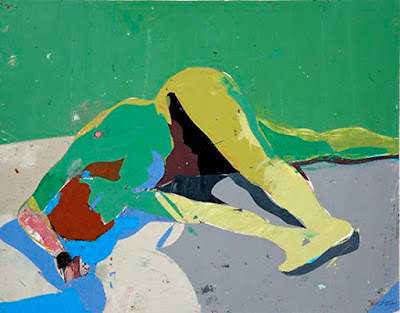 
I`ve been vaguely aware of Kim Frohsin`s work for years but never took a good close look until recently. These figurative paintings from ten years ago really caught my attention. Her negative spaces are skillfully integrated with clear bold color. Newer work seems to be about architectural abstraction. 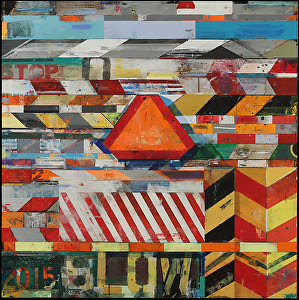 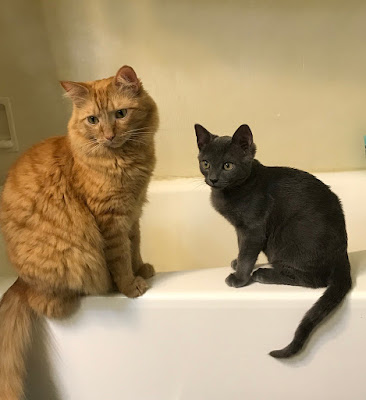 Those are my boys Lyndon and Carter. They are on the edge of the bathtub because they are obsessed with this cat toy;

It is stationed above the tub where they can never reach it. Carter`s foster mom gave it to us and it is a most excellent device. We all know playing with our cats is important but it is also incredibly boring. Right? This is the solution. The Leather Bouncer Wand is capable of many complex movements and sounds that make cats insane. This is entertaining. Other toys may look like this but this one is tough. We use it all the time and it hardly shows any wear. Trust me. 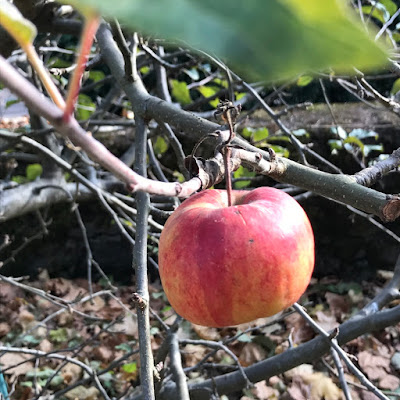 The last apple on my Honeycrisp apple tree and the only one not infested with insects. I only saw it because the leaves had fallen. It must have ripened after the cold killed off the bugs. The dwarf little tree produces lots of fruit but I don`t know how to protect it. I use a dormant spray in winter to little avail and yes, I`ve googled my dilemma. Maybe next year I`ll try something toxic. Be careful what you ask for! I was eating so many of these apples I thought I have to grow them!