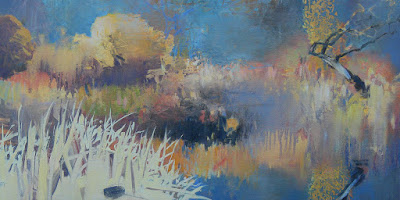 
I haven`t loved a summer so much since living in New Mexico. This benign, soft, fresh summer is a surprise and a luxurious gift. One sweet day after another. No smoke, cool oceanic mornings followed by clean sunny skies into evening. How did we deserve this? Paris reached 108 degrees! No one knows why we`re so lucky.
Yet the overwhelmingly green landscape doesn`t inspire working in series. So as in previous summers, I use the season to get to the paintings that have been waiting in the back of my mind. There`s usually a photo to anchor the memory and the emotion. Once I begin, it`s not hard to imagine.
The wildlife refuge-municipal park-farm which constitutes Minto Brown Island in Salem OR always provokes me. The wetlands in particular in late fall and winter. The painting above is probably still a work in progress, I don`t understand it yet. The color took off in a direction of its own with the composition trailing along. Feeling like a bystander when painting isn`t bad but it takes longer to evaluate the conclusion. 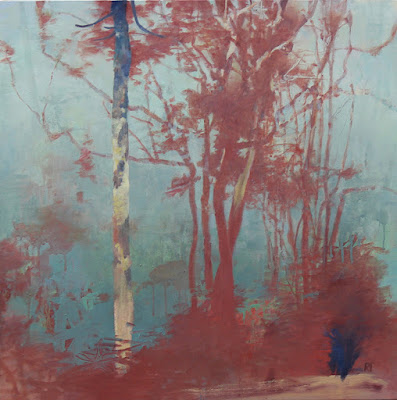 
Another new painting that is a mystery to me. The inspiration was the maroon leaves decomposing on the forest floor in winter. I was remembering a muddy little woodland I love on Fanno Creek. Somehow it quickly became more about the juxtaposition of Mars violet against teal. Once I figure it out, I`ll probably paint over it. 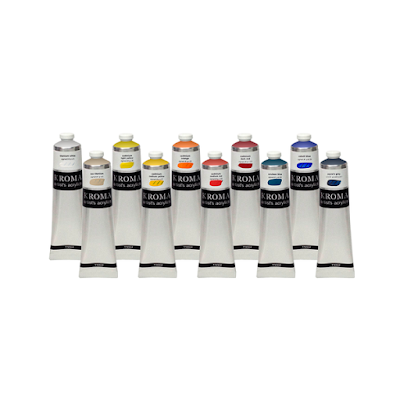 I happened upon an ad for Kroma Acrylics on Instagram, I went to the highly educational website and soon realized these might possibly be what I`ve wanted. The problem with acrylics is that they are not oil paints. When I read they had the maximum pigment load the vehicle could accept, I was ready to gamble. I bought the 'classic' set pictured above. All traditional; cadmiums, cobalt, and titanium. All primaries with none of the modern pigments based on dyes in this set. They are a pleasure to work with, very creamy yet dense. In my practice, acrylics come into play to extend or correct watercolor. I rarely use them alone. If they had an equivalent of Gamblin`s Radiant White, I would be tempted to replace my oils. As good as these are, the white is just not opaque enough, and I really don`t like trying to re-paint spontaneous brush strokes. The texture is soft enough though, I don`t think I would need both a tube and fluid version of my colors like I do now. They`re local too and I love that! 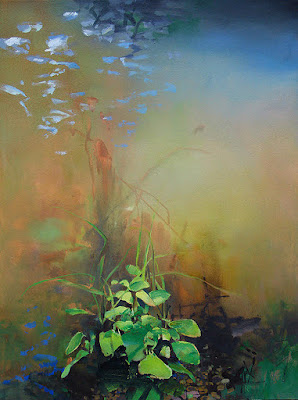 
I`ve been super busy being famous lately. A Chinese-American website called Our Narratives asked me for an interview and I said of course. Many nice questions and emails later, "Through the Mist-Interview with Oregon Artist Mr. Randall David Tipton" was published. Thanks Adelina!

Then a French magazine, Practique Arts, asked me. 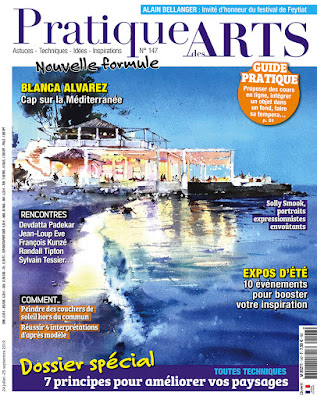 Having just done the one, I was less than enthused. I asked what they would want from me? The list was long. I said no, there were several interviews already in existence, my story stayed the same and I just didn`t have the time to give it. She could write something on her own if she wanted to. She did. Thanks Steph! 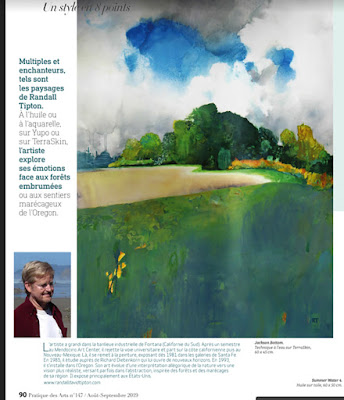 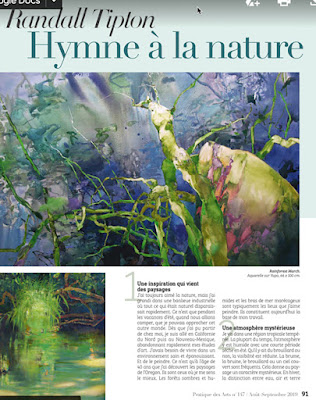 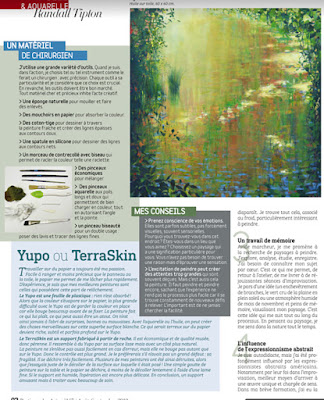 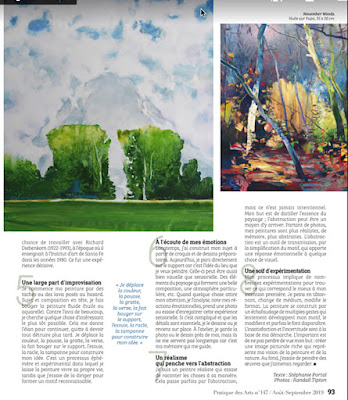 I translated some of it through Google Translate with disappointing results.
My bilingual buddy Mitch gave me a much more poetic version. Nice how well the paintings reproduced!

Have you ever had something you knew intimately become really popular?
As a kid I went to Laguna Beach often as a guest of my close friend Jim. His parents brought me along to keep him entertained. We had so much fun. The same giant house was rented with three or four families occupying it. The adults played cards from morning until bedtime while the kids swam, fished, and hiked. Our favorite place to fish has become a plein air hot spot; the Keyhole. We never called it that but we thought it was cool to walk through. Right beside it was a huge slanting rock we sat on to cast our lines. On the bluff above was a trailer park. Now it is an upscale resort called Montage. Here are some of my painting colleagues views of the Keyhole. 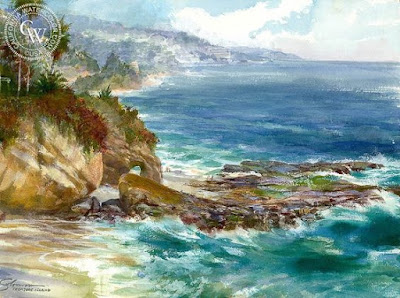 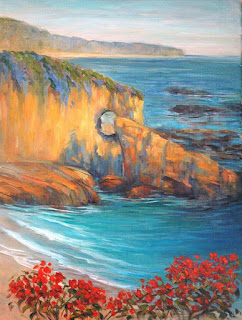 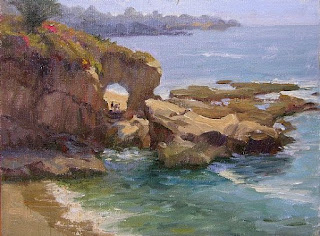 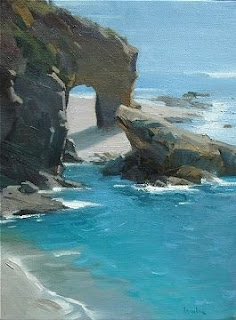 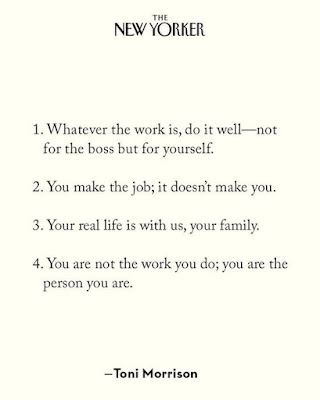 Lessons from her father. Anyone who has ever had a job could benefit from these clear principles. 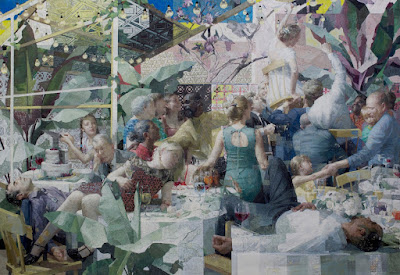 The Wedding by Zoey Frank


I was aware of her but not fully. Then I looked closer at Zoey Frank`s astonishing work. Oh my God, just take a look. Such luscious, sensuous realism! Yet completely contemporary. This rarely happens to me but after a half hour or so scanning carefully, I became intimidated. I thought why bother? Let her do it. Stupid, but I was flabbergasted! 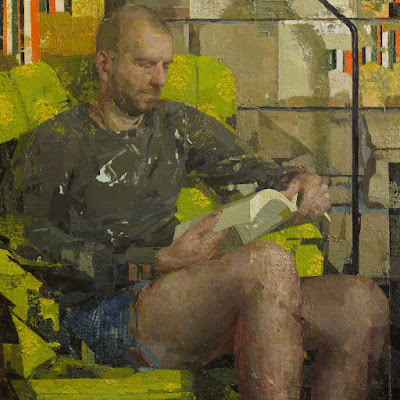 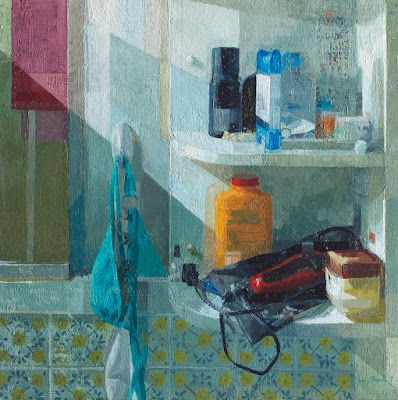 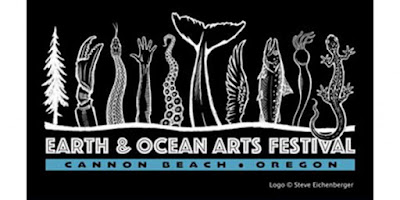 I`ve been working on a show to coincide with the new Earth and Ocean Festival in Cannon Beach in September. The industrious artists and merchants on the coast are always thinking of fun ways to attract visitors and celebrate something worthy. Well the dates of the festival were changed and my show became more of a group affair. This is fine though I did feel like a balloon that had popped. I will still have lots of new work on display and I will be giving a watermedia on Yupo demostration on Saturday September 21 at 2 pm at the White Bird Gallery on the north end of town. This is my 34th year with the gallery! 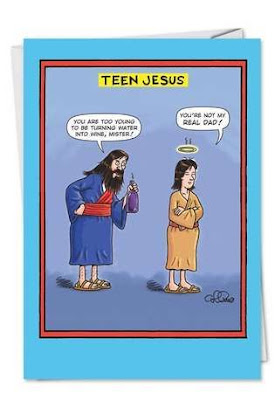