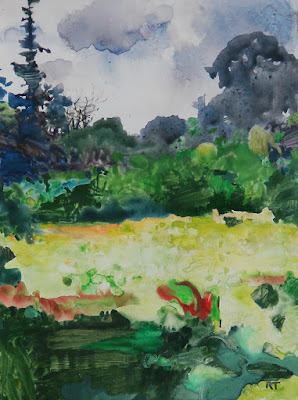 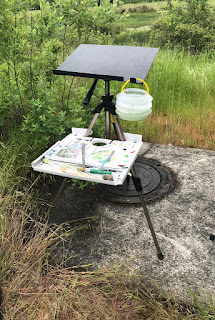 It`s been a tentative start to the plein air season, Spring came late,  but my new set up is simple, functional and compact. I wish I had abandoned my deliberate low tech lawn chair rig years ago. I stand to paint in my studio, it makes sense I`d want to outdoors as well.
I don`t make a lot of plans, I like life to be as slow as possible with as much time to paint as I want. My focus is on art whether or not I`m doing it very well at the moment. I`m often not and that is when I welcome any interruption whatsoever. Finding a balance between stimulation and solitude isn`t easy.
One way to appreciate and utilize the quiet life is to go to New York City!
My husband John had been wanting a full scale total immersion NYC experience and he got one. An old friend lives in a close by suburb, so we stayed with her but took the train into the city every day. It was her suggestion and a good one. She lives in an old converted barn in the middle of a huge garden. 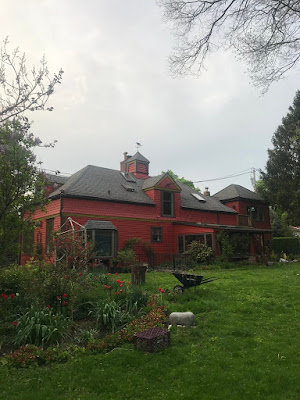 A great place to decompress.
My pal and I had lived on a post-communal farm together when we were both very young. I`ve often  marveled my parents trusted me with this adventure at 19 and far from home, but it was all they really could do. They loved me. It was a pivotal experience, everything is pivotal at that age!
We became fast friends and stayed so even with a whole country between us. Being with her again in this late part of our lives was profoundly satisfying. Because our visit was a full week, John slipped into her pocket as well. He personally understands now. 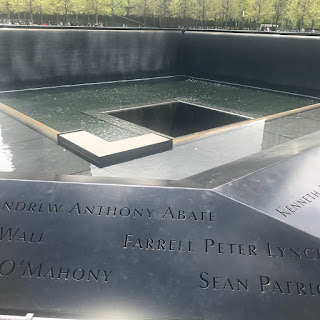 I had been to NY several times since the attack but had never seen the site. This was a high priority this time. Photos are vastly inadequate to convey the scene. The memorial uses the actual footprint of the two towers in creating a waterfall that flows from the edges of the open void into a pool before falling again into an unseen space. I think for many, the image of the towers melting in place was the most horrifying. The falling water suggests this. Reminds us in a way both powerful and subtle as the names of the dead can be felt by our fingers. It is a masterpiece.
The jury had this to say about the winning design;


Of all the designs submitted, we have found that "Reflecting Absence" by Michael Arad, in concert with landscape architect Peter Walker, fulfills most eloquently the daunting but absolutely necessary demands of this memorial. In its powerful, yet simple articulation of the footprints of the Twin Towers, "Reflecting Absence" has made the voids left by the destruction the primary symbols of our loss. By allowing absence to speak for itself, the designers have made the power of these empty footprints the memorial. At its core, this memorial is anchored deeply in the actual events it commemorates – connecting us to the towers' destruction, and more important, to all the lives lost on that day…
While the footprints remain empty, however, the surrounding plaza's design has evolved to include beautiful groves of trees, traditional affirmations of life and rebirth. These trees, like memory itself, demand the care and nurturing of those who visit and tend them. They remember life with living forms, and serve as living representations of the destruction and renewal of life in their own annual cycles. The result is a memorial that expresses both the incalculable loss of life and its consoling regeneration. 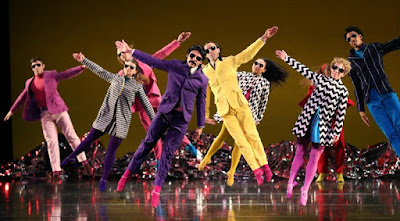 We saw the acclaimed play The Ferryman and a dance performance by the Mark Morris Group loosely based on the Beatle`s Sargent Pepper`s Lonely Hearts Club Band. It was colorful and joyous with extra music by Ethan Iverson. 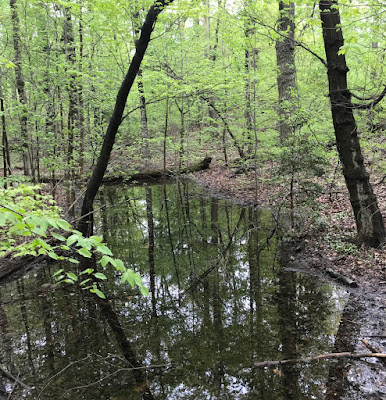 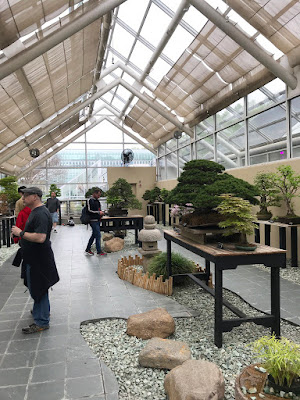 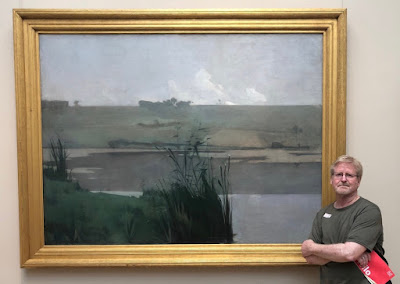 Two botanical gardens, bonsai and alone time with John Twachtman`s "Arques la Bataille" at the Metropolitan Museum. The first time I saw it in 1983 I gasped. I had never even seen a reproduction and it`s quite different from his other work. I still love it but was shocked to see the color was completely other than I remembered.
The best paintings I saw were in a show of Joan Miro`s work inspired by poetry at MOMA. 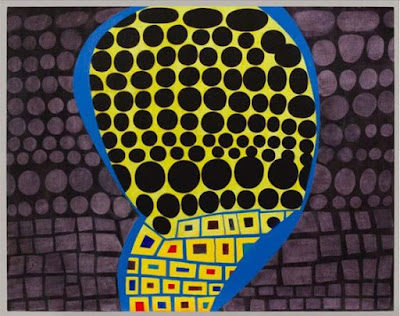 
Thomas Nozkowski died last week. Even in the title of his obituary, the size of his paintings is mentioned. His opinions about scale were reassuring to me and the idiosyncratic work he produced delighted me. He was an outspoken original. Though our work is nothing alike, I felt close to him. Read his own words.


I`m about to begin a new period of oil painting now that I`ll have all summer to concentrate. Prior to this effort, I`ve been testing watercolor papers and trying to get my fill of watermedia. As I`ve written before, I paint with oils as a concession to successful career practices. The techniques are nearly identical but there is much more of a market for oil paintings. I live with this compromise comfortably. However there is a psychological freedom in working on paper that is unique and pleasurable. It`s less precious. Though when it comes to presenting a good one, framing costs are considerable.
So in an un-Nozkowski spirit, I`ve been painting familiar motifs on these sample papers and also trying mightily to get a good watercolor before I resume the oils; 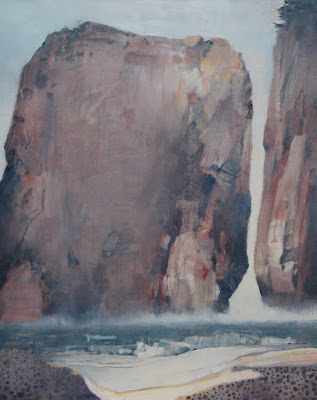 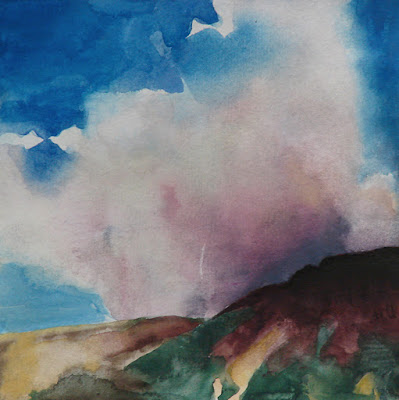 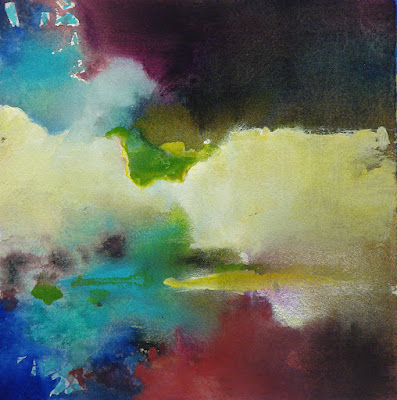 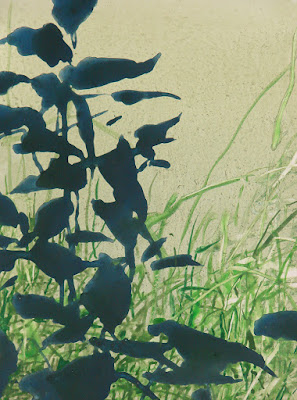 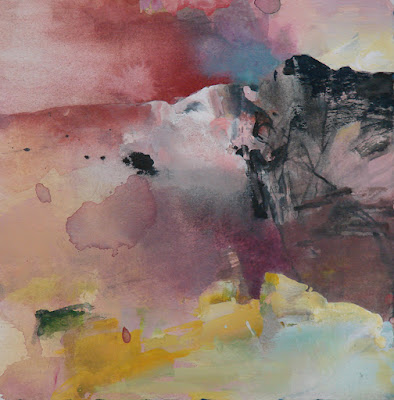 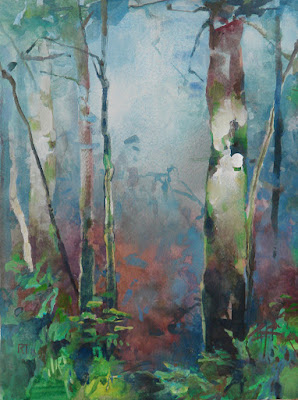 
And this last one below is painted from seeing a friends Instagram documentation of her hiking trip in Jordan [!] Something about the hills in the far distance seduced me. The outcrops were bleached to transparency much like distant views in New Mexico. Georgia O`Keefe famously called the phenomena 'the faraway nearby'. 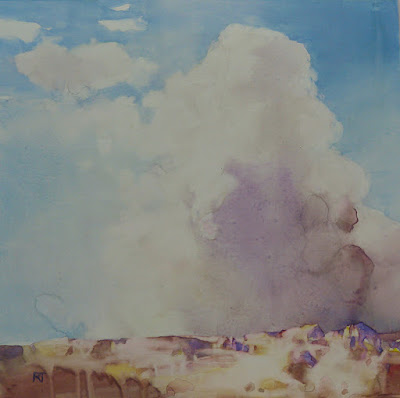 Everyone by now knows of the states trying to outlaw abortion in an effort to get a case before the Supreme Court. That a bunch of men think they can legislate what a woman can do with her body makes me crazy. I suspect most readers of this blog about painting would know how I feel and agree.
Fundamentalism, in any religion, is about control, not faith.
Here is one ministers take on the matter; 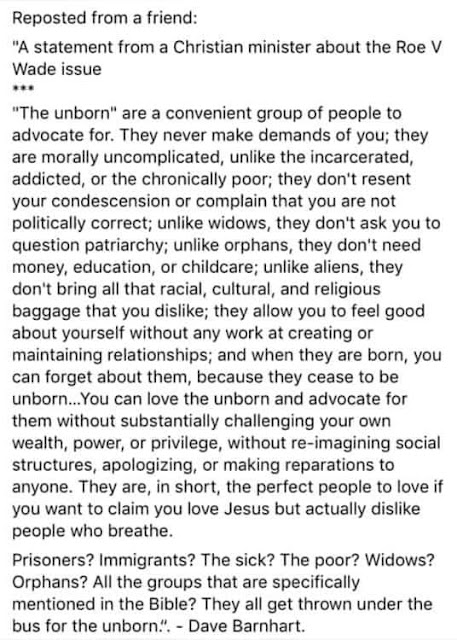 Everyone should bear in mind that outlawing it will only make abortion dangerous. That is obviously no problem for politicians who come up with laws that would prosecute a female for an abortion more severely than the man who raped her. This is the modern Republican Party. 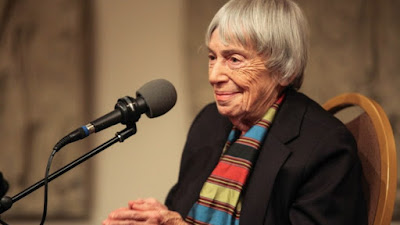 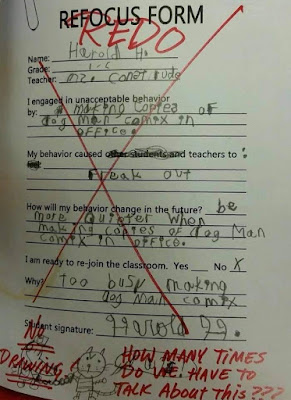 Harold Ho is a hero.