She loved my work, she bought some outright and she wanted an Icelandic landscape. I thought, this is easy! A small watercolor I painted after my visit to Iceland in 2016 prompted her request. Now I very rarely do commissions because my paintings get built through a personal, intuitive struggle. Probably true for most painters. It is difficult, to say the least, to really understand my own motives. Why do I want to paint something? The answer is usually vague and never verbal. Yet language is the medium to connect two visual imaginations. It is obviously impossible. So why say yes? A love for the subject, deep familiarity, liking the patron, money, and a willingness to be challenged. Yes! This painting took six weeks, a really long time for a painting of this size. Because I liked her and wanted her to be pleased, I gave her two in-process photos which launched long emotional conversations. The variety of landscapes underneath this surviving layer are many. I had listened carefully to her vision of the landscape and when I got to this point I knew it had to be the end. The commission would never have happened without my complete confidence I could do it. It was more like a promise. But by last week I just wanted the whole thing over. She did not have to accept it, I would return her deposit and we both could get on with life. But she liked it. What I learned was a better idea of myself and new communication skills that I hope I never need to use that way again. 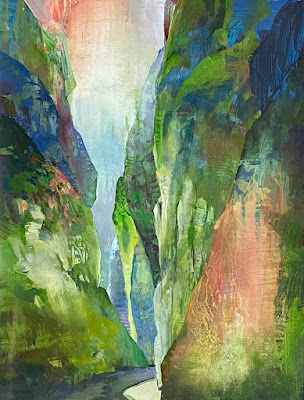 Canyon oil on yupo 24x18 inches,  61x46 cm
Oil on Yupo is a slimy beast. Much like painting on glass. Every brushstroke shows, blending is tricky, values change in the drying time, it is sloppy, but the reasons for choosing it are also good. Yupo is cheap, very portable, and easy to ship and store. The best reason though is because of the brilliant white surface that still manages to reflect light back through the paint layers. They glow. If it just had a little tooth [texture] I`d use it more with oils. 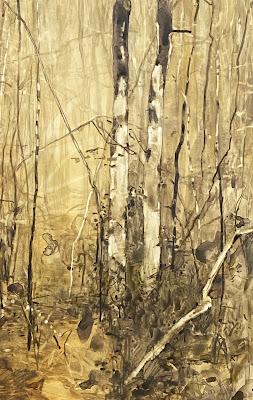 Late Winter watercolor on yupo 20x13 inches, 51x33 cm
This is new, I just completed it while waiting for the commission to dry. More realistic than my usual preference but I could see that the forest was about to explode into leaf making the bare branches concealed for 9 months. Winter is a feast of line. The densest tangles fascinate me and I`ve been itching to paint something really textural. This being a watercolor, the light values come from dilutions of the paint. Those thin veils often can`t stay in place on slick yupo because the binder is too thinned out. So I`ve been adding gum arabic to make them stickier. It works well though lifting it for revisions isn`t quite so easy. 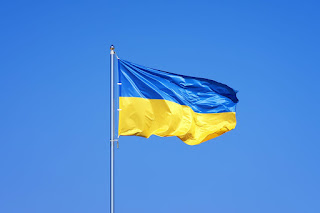 What can I say? It reminds me of February of 2020.  We saw the virus escape China and devastate northern Italy and Iran. I bought some hand sanitizer while others bought extra toilet paper. I truly didn`t know pandemics were even possible anymore. So we all just watched it arrive day by day, closer and closer and soon change everything. What would I have done differently?

All winter Russian troop movements were reported in the press as the Russian military amassed its  might on the borders of Ukraine. Everybody could see it but it was so hard to believe because there was no provocation. One shrewd guy with abundant mental illness could attack a country of 44 million in plain sight. What kind of world do we live in? This bleak situation threatens us all potentially. We voted our crazy leader out but the one thing I agreed with President Trump, was in his reluctance to involve American forces everywhere. Now I wonder if when we step back, evil dudes like Vlad fill the void? The Russian people don`t support this, it makes no sense. How do you counter madness? Yet here we are. Nuclear weapons make the room for error tiny but we must do more for Ukraine, that much is clear. 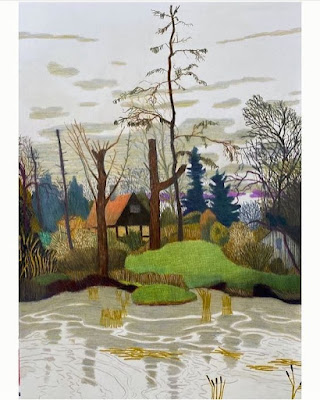 Per Adolfsen
When I first saw this Danish artist`s work I was a little dismissive because they were done with colored pencils. I kept bumping into them and I realized holy moly this guy is a genius! Me and thousands of others simultaneously. He is a true Instagram phenomena. 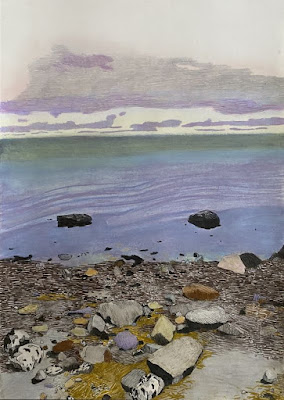 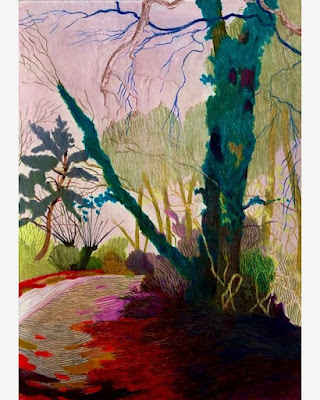 Per Adolfsen
There is so much invention to the stuff I am just in awe of. His color is so unique and evocative. He lives in Denmark! That is on no ones list of beautiful countries yet Per Adolfsen takes his sketchbooks out on his walks and mines that landscape of every distinguishing quality. That humble countryside comes alive through his hands! He`s not too young and I`m hopeful the acclaim doesn`t sweep him away. Here is a lovely interview.

Not a lot of happiness around I notice. It`s an inside job. If we want to change the world, let`s start with ourselves. The only exception I have with this list is the trip. Take it. Travel makes us better people. 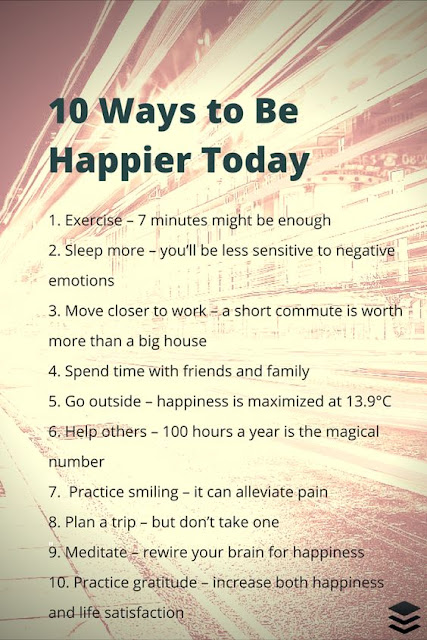 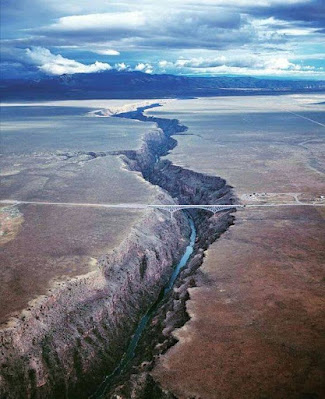 That`s the gorge of the Rio Grande River outside of Taos New Mexico. We are going to visit this spring to do research on moving there. I left 28 years ago and never looked back. This is John`s idea, and it merits consideration. He has lived in the wet part of Oregon all his life. He deserves some sun.

HERE and HERE for prints