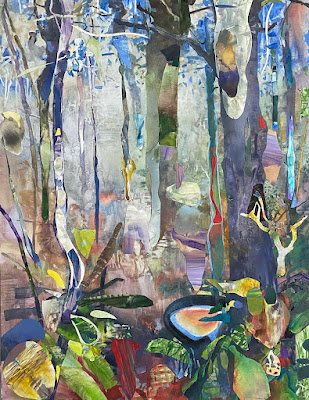 I had a failed painting and after many heroic attempts to rescue it, I gave up. Since it once had promise I wondered if I could just patch over the problems with collage? I have a heap of fragments from previous debacles to choose from for my shapes. Instantly there was this new way forward with an interesting conclusion as well.

I`ve been thinking I should write something. This is not the summer I imagined coming up when I got my second vaccine shot March 31. I have to admit I was expecting more joy, god knows we need it. Yet there is an undeniable tension. Only a week after the summer solstice, still June, the now infamous heat dome literally scorched the Northwest killing hundreds of people. The further north you were the temperature was even hotter. Records were broken everywhere by multiple degrees. This set up a cautionary mood, what are we in for? The first major wildfire soon began in southern Oregon fouling the air with smoke all through the northern Rockies. Our country’s  vaccination rates began to stagnate just as the ferocious Delta variant began sweeping through the states. Supporters of the former president risked their lives in making the political protest of boycotting their one safe passage through this, the miracle vaccine. On the left, those that shunned the vaccine proved how insincere their belief in the common good really is. With so much death throughout the world from Covid 19, it is privilege indeed to refuse this easily available protection which is absolutely free. Shame on those confused foolish people. Soon after the 4th of July, historic floods raged through Europe and then China. Global warming is here. Those that continue to downplay the reality of it are lying. Everyone can see now things aren`t like they used to be not so very long ago.

I am at the last part of my life and I want a full engagement with what is left. Life goes on no matter if the sun burns or the rivers rage. Somehow I`m determined to move through these calamities with a positive spirit. My later years will be full of events and conditions that result from overheating the planet. In the destruction, how to have an open heart as it is breaking? I intend to find out and suspect this can happen best if my focus shifts away from my own disappointment. We are each surrounded by the needs of others. Attending to some of them may be a way forward. 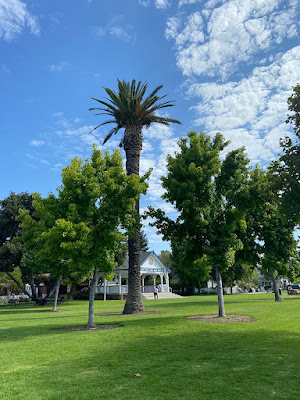 So when I could tell my old friend was overwhelmed from the weight of caring for her dying husband, I offered to help. She lives on the central coast of California and the situation was quite serious when I arrived. Sometimes it just takes a fresh pair of eyes to see what is happening. Having a bit of experience with hospice, I helped with that transition then came home. To be trusted by someone dying is a special humbling honor. 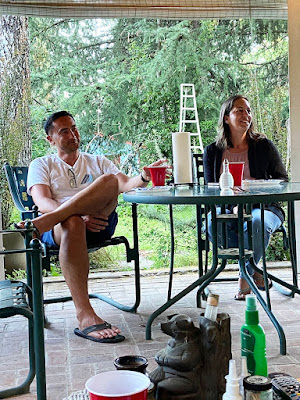 John and Tiffany in the garden
My nephew and his wife from Southern California were in town this weekend. They didn`t bring their sons because one is still too young to be vaccinated. It has been such a unique pleasure to watch my nieces and nephews grow into themselves. To gradually understand their unfolding along with them. Last night we gathered in the garden of my sister in law Norma, talking and eating through the long summer twilight. It was perfect, the antidote for a year of solitude. 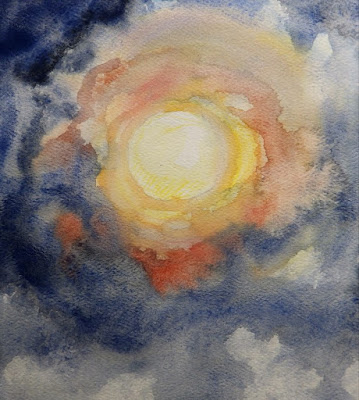 by E M Corsa
My dear unmet friend from the coast of North Carolina, Elizabeth Corsa,  has been featured in the magazine Artisan Joy. We both love and struggle with Yupo. She is as dedicated an artist as I`ve ever known. Check out the interview and the work on her website. 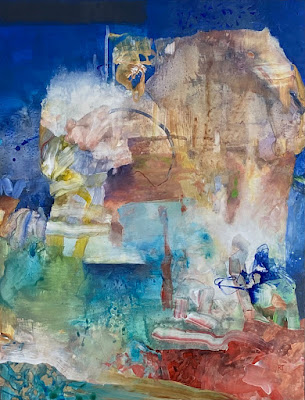 Laguna watermedia on Yupo 26x20 inches
Like all these new abstract paintings, little is consciously intended when I begin. Soon though this had a coastal vibe yet it was too sunny for Oregon. Then I remembered all the holidays and summers I spent in Laguna Beach growing up. My best friend`s family always took me along on these vacations. Several families would rent this one big house overlooking the ocean but blocked by a bluff of a view of the beach. We had such fun swimming in the ocean.
The town was in its last days of a bohemian art scene and I`m sure my imagination was enflamed by seeing so much art at its annual festival.  This was the 60s and galleries were not common where I grew up. I remember how exotic and exciting it was to know it was possible to have a life of painting. Just a little exposure to something new is all it takes for some kids to find out what they were meant to do.
I was in an art supply store and saw a packet of 12x12 heavily textured watercolor paper claiming it was thoroughly sized. Sizing is like a glue that keeps the paper from being too absorbent. I knew better than to fall for it but I haven`t shopped in person much for a long time. Lesson learned, if it looks like a homemade paper towel, painting on it will be a similarly rustic experience; 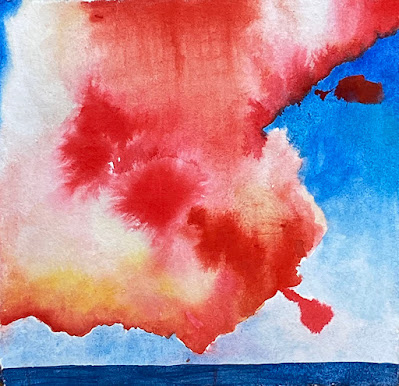 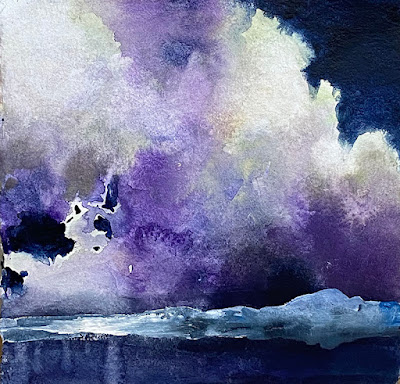 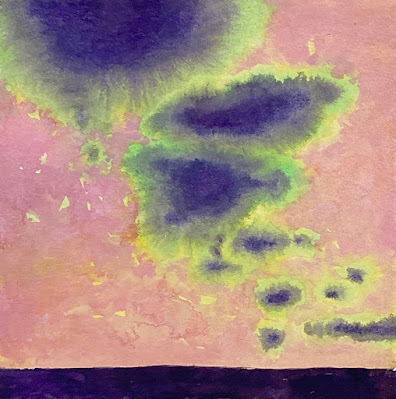 Not much more than doodles but they let me think. Between more ambitious paintings, I often need an interlude of some sort. I want to be making something but with a small investment. 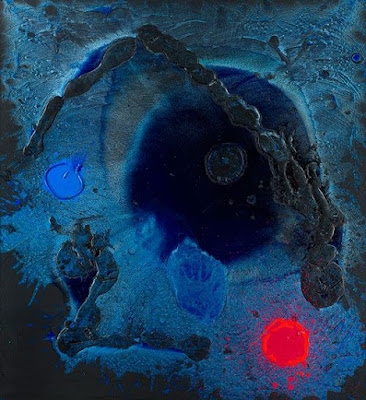 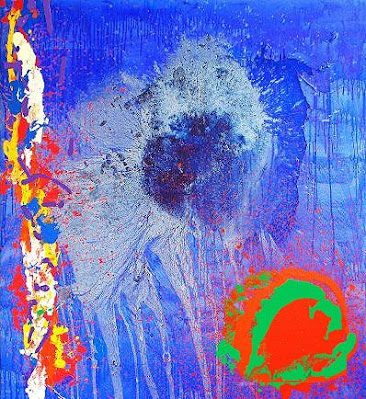 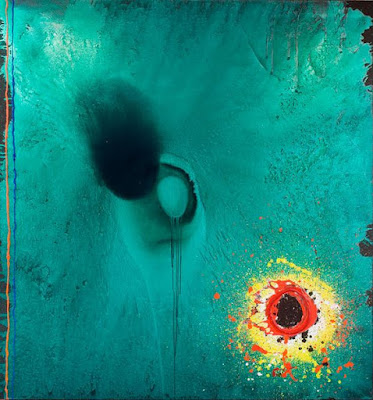 John Hoyland
To me they seem seeped in 1960`s psychedelia but they were painted later in his career. John Hoyland, the great British painter, wanted to make abstract art that vibrated with possibility. These examples of his later period I just love! They`re not just lyrical, they startle me into hearing a different language of color. 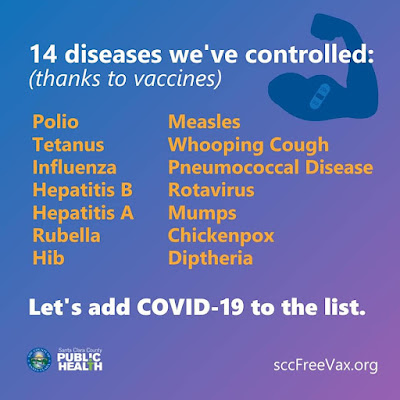 click HERE to see work for sale in my studio

Here for small prints from Saatchi