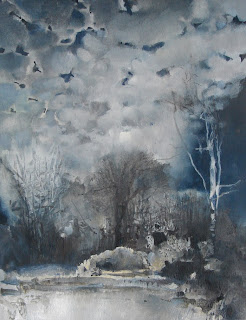 With a show opening Aug. 10 at the White Bird Gallery in Cannon Beach OR, and one on the 24th at the Waterworks Gallery in Friday Harbor WA, I`m immersed in the tedious endgame; attaching hardware, photographing and signing them and painting the edges to make them presentable without framing. Thirty two pieces will be leaving my studio soon. Here and there I`ve tried to paint watercolors to remind me I`m really an artist. Though I used to mock traditional technique, I`m now obsessed with transparent watercolor. Unfortunate because I can`t seem to remember how to do it. This began nice and luminous and free of opaque pigments and then suddenly it needed repairs. Out came the acrylics, watercolor crayons, and water soluble graphite. As much as I want to be Winslow Homer, I`m going to have to settle for myself.
watermedia on paper 14x11 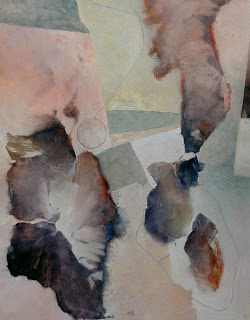 This was painted from memory after a cross country flight. I always try to get a window seat and then have a stiff neck for a couple of days after. Many artists have been enthralled with those aerial views of the American West. There is something so fascinating in seeing the things built and planted by man juxtaposed on the organic shapes of the landscape.
watermedia on paper 30x22 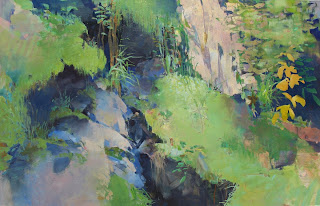 I finally got into the mountains to see the Opal Creek Wilderness. This is a newly designated wilderness that took may years to create. The north fork of the Santiam River flows through the park and is colored the most startling green. There were some deep vistas of the surrounding peaks but it was the smaller details that got my attention. Like this cliff.

The gigantic Titum Arum has finally opened up at the US Botanical Garden. They are by far the largest flower on earth and they smell like carrion to attract pollinators. Take a look at their web cam.
oil on paper mounted on panel 27x42 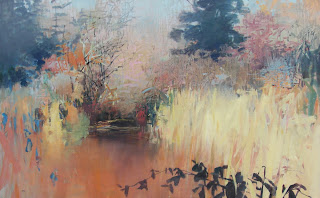 With western Oregon a vast wall of green in mid summer, I decided to paint this marsh as it looked last December.
oil on canvas 30x48

Posted by Randall David Tipton at 2:30 AM 3 comments: 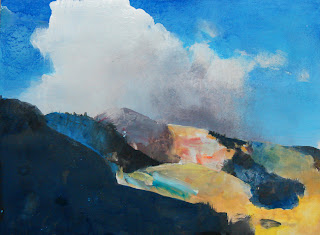 I taught in my studio today and did this as a demonstration of some techniques. It`s now predictable that I`ll end up being quite excited by the discussions when teaching. Hearing the different motivations, intentions and aspirations individual painters have is stimulating.
The painting is based on a drawing I did in a moving car traveling south on I-5 several years ago. The most casual sketch can contain enough information to evoke a memory of that moment and a more fully realized work later.
watermedia on paper 9x12


available work in the studio 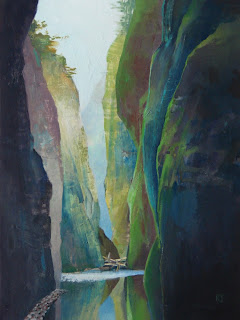 I never tire of painting this unbelievable place.
oil on panel 16x12

This  creek is in Vancouver Washington and a parallel walking/bike path is close by.
watermedia on paper 6x18

Painted from the memory of a hike on that coast last February.
I`ve been under the weather this week so I`ve been fooling around with watercolors. If you`re curious about the green on the right, that is Holbein`s Compose Green #2. I love the stuff.
watercolor on paper 6x18

An engineer and a chemist came to visit my studio yesterday. They had flown in from Tennessee to be married in Washington State before the Supreme Court decisions on marriage equality were announced. They weren`t optimistic about the coming ruling. Sanity and fairness prevailed and their vacation became a celebration. They chose the Northwest rather than Iowa or Vermont because they wanted to see my paintings. Now that`s a compliment. For two weeks they`ve been touring Oregon.
Mike is a gifted photographer and Chris is in charge of finding locations, take a look at some of the pictures. These early married couples are scouts for the rest of us. As they introduce and refer to each other as husbands, I wish for them courage and joy!

Posted by Randall David Tipton at 2:33 PM No comments: 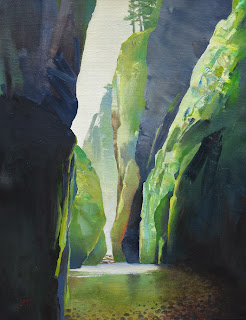 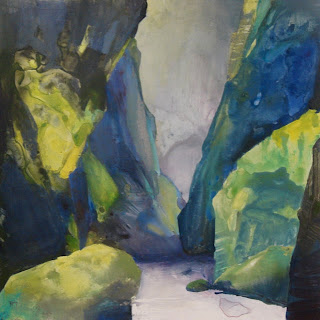 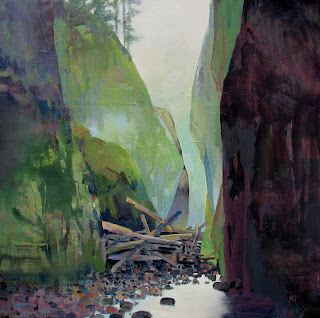 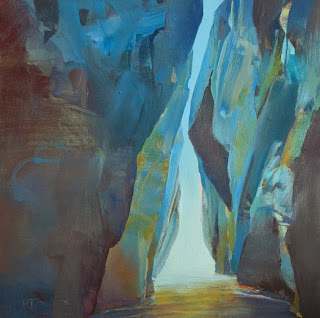 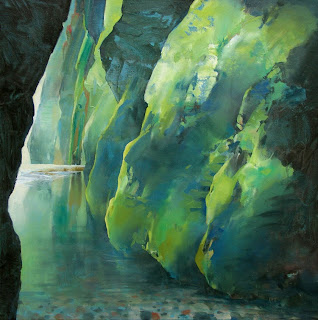 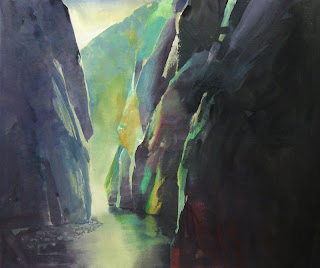 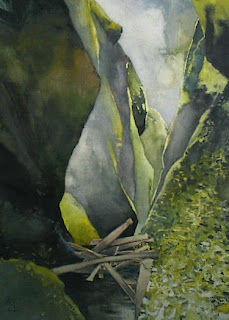 Oneanta Gorge is the place to be on a scorching hot day like today. This deep narrow canyon faces north and all the light is reflected. The path is the creek and a pool with a waterfall, the destination.

This blog was created five years ago today to document a project. Over time it has evolved to be a promotional tool primarily, but also as a sort of journal. My hope is that Google will still exist in 20 years or 50 and that anyone curious, including myself, might see what I was up to. I shouldn`t be optimistic, I`ve taken boxes of LPs and 8 track tapes to the dump.

Martin Luther King said "the moral arc of the universe is long but it bends toward justice". Last week it took a sharp turn. William Kennedy, a Reagan appointee, cast the deciding vote that declared gay relationships matter and are deserving of respect. By law. One thing is credited for the fast change in attitudes; most people now know gay people. Through countless individual acts of courage, because we insisted on being ourselves, our efforts hit a critical mass. An attitude of fairness and decency has taken hold. Millennials, that scorned generation, understood the issue instinctively. They are voting and changing the political culture of our country. I also believe the catastrophic AIDS epidemic made the nation talk about homosexuals, even if derisively. We came into view and it`s the only gift I have seen from the overwhelming loss. So many creative colleagues died, it felt as horrific and more personal than Vietnam. Those left alive lost their fear as well as their friends and were not about to be silent. And suddenly, years later, there is real change.
I have no doubt my beloved adopted state of Oregon will do the right thing. John and I will benefit financially most definitely but it`s the message it gives to kids that I most care about; it`s ok to be who you are. Centuries of religious antagonism haven`t changed anyone`s sexuality but it has broken the spirits of millions. It`s time for this to stop. We know it is innate and it`s been documented in hundreds of animal species. We are part of nature, God`s plan if you will.
I come from a deeply Christian background. Thank you to all who thought this through; if the belief that something is a sin is vastly more harmful than the 'sin', something isn`t right.