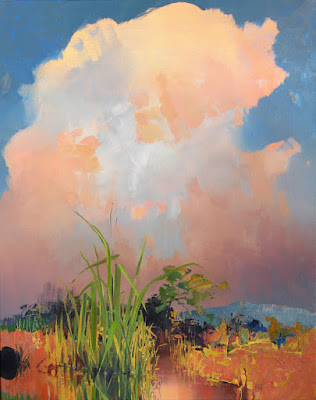 
Once this holiday was celebrated. Now it`s a quaint relic, or so it seems. I`m no longer a church goer so I may be wrong. It sure was a big deal when I was a kid. Mom was a Southern Baptist who had to agree at the outset that any children would be raised Catholic, like Dad. Since neither were particularly religious given their young age, this may have seemed minor. Yet as the brothers were born, the Reformation was reenacted within our family. For Lent, Dad strongly 'encouraged' us to give up candy to better understand the suffering of Christ. It worked, we were miserable. Especially during Holy Week when we also attended long services in Latin almost every night of that week. But come Sunday, that secular rabbit came through! Our Easter baskets were heavy with chocolate! No doubt the experience of delayed gratification was a helpful prelude to real life. As I got older, the mysteries of the Church had their way with me and I was a true believer! So as not to leave my Mom feeling isolated, I also memorized Bible verses through the BMA. I was one thoroughly Christian little kid! But it unraveled rather quickly as a teen, just through the idea of a loving God. No salvation necessary, just do your best. My outrage would come later as I fully understood the persecution of homosexuals.
Easter was holy and I still think so. A celebration of rebirth, spring planting, warmer and longer days and for new starts, new hope! It`s worth a party! 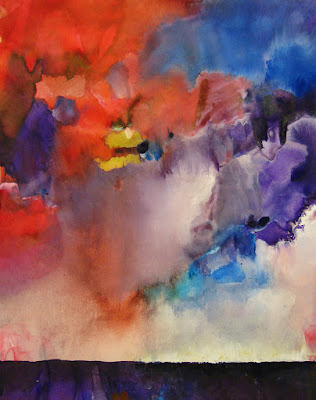 The Storm is Passing acrylic and ink on Vellum 10.5x8 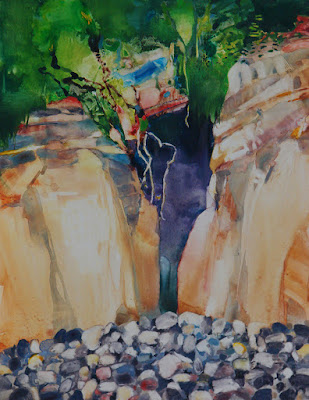 Split in the Cliff watercolor on Yupo 14x11 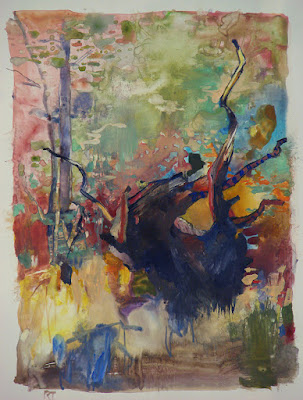 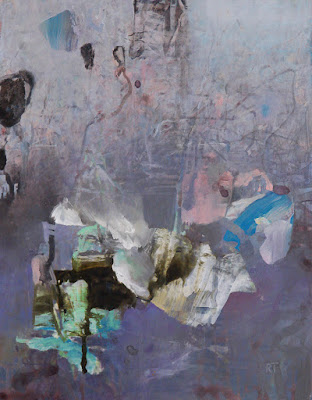 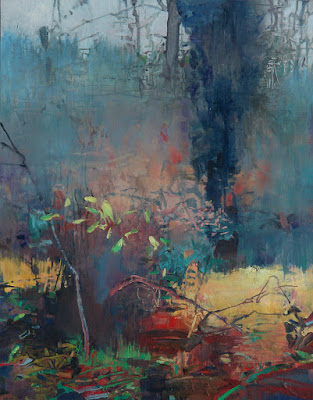 
Some recent small paintings.
For the first time in memory, I have a lot of unfinished work around. Usually I`m too obsessed to walk away from something. But as I mentioned, it`s been difficult to concentrate. There is a limit to how long I can stand. In this period of waiting for my surgery [April 23], I had hoped to complete some of these disappointing paintings. Luckily I had the good sense to contact someone wiser than me. She told me no, just do new things. Chores right now aren`t good for my head.


My part of the 'Nature Perceived' show, now goes from the museum to the Hanson Howard Gallery in Ashland Oregon. Four other paintings are also included. The local paper has published a preview saying I am a disciple of Richard Diebenkorn. While I think he was a terrific painter, I`ve never thought of me as a follower. Too distractable!


Earlier this month, I was the juror of acceptance for the California Watercolor Association`s regional show. I said who`s in and who`s out. It`s true, the power was intoxicating!


Anybody know anything about the Myers-Briggs personality tests? Is there anything to it? Years ago I took the test and wrote down what I was, INFJ. Never thought much about it until recently when I`ve learned of others of my 'type'. I have no time whatsoever for astrology, so if this has any validity, it would be great to be more predictable. 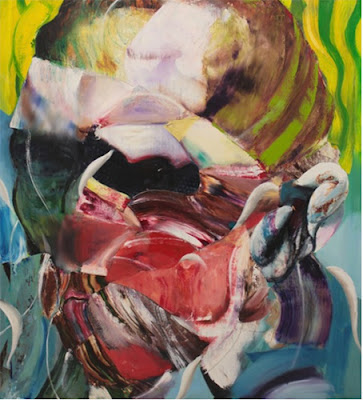 Look close, it`s everyone`s favorite painter! The red on his cheek is brilliant, raw and exposed. That`s exactly how I think of him, defenseless against reality. The good dying young. 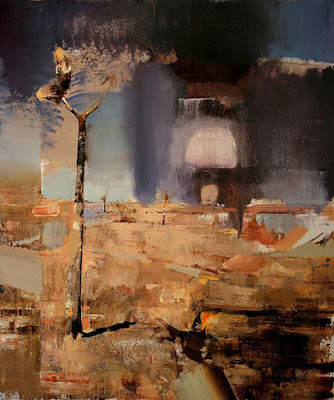 Another. Vulture in a dead tree, atomic explosion in the distance. Hope this isn`t a prediction. 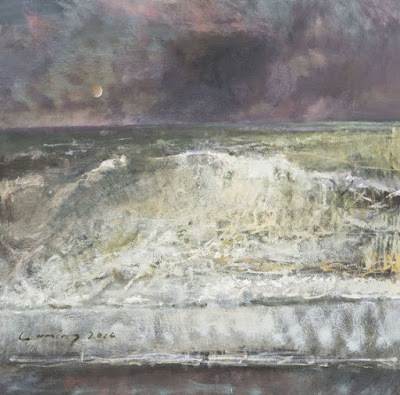 
I love every scrap this man produces. In this truly awesome seascape, all is poised for the crash of the wave. The waters are gathered back, the dark cloud hovers, sunlight breaks on the cresting wave, the waxing moon will witness, the receding film of foam rushes toward the monster..... It`s so dramatic! Fred Cumings paints everything with such sensitivity! 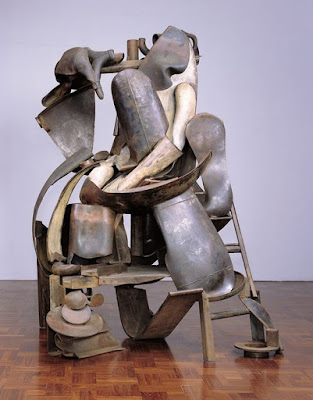 The Descent from the Cross by Anthony Caro


This sculpture takes a little time. We`ve all seen paintings of this desolate moment. I found this very tender. 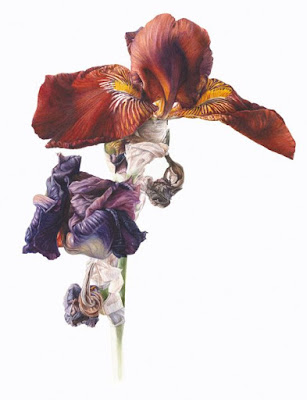 Botanical illustration is an old love of mine. Might have been the career that blended my interest in art and science. Fiona Strickland brings a breathtaking intensity to the genre. 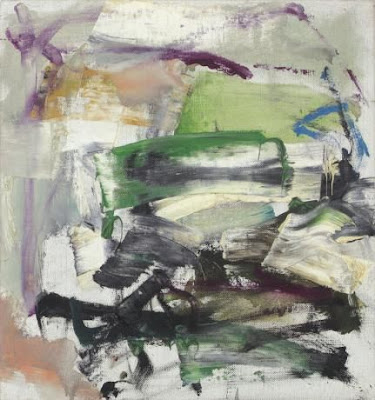 
Here`s a simple, early Joan Mitchell! Everything threatens to fly off the canvas but doesn`t. All is contained though whirling. 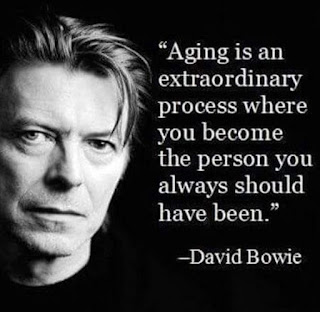 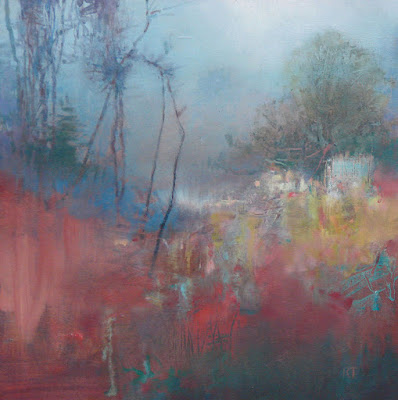 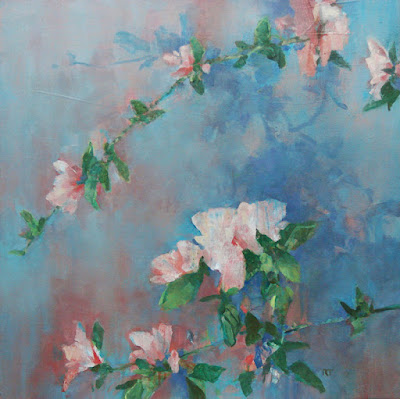 
Blogging my new work feels a little like turning in a term paper. Yet many bloggers will say this sense of accountability is positive, keeps them on track, diligent in their process. That`s valid I suppose though showing you what I`ve done doesn`t seem to improve the quality of my painting. However I do feel uncomfortable, especially when I`m aimless. For far too long the state of my legs has been so distracting it`s thwarted any forward momentum or cohesion. When I`m myself again, I`m going to plant myself on Minto Brown Island until I have so many ideas for new work I feel like I will burst. That is when painting is the most fun. When the images demand to be made. 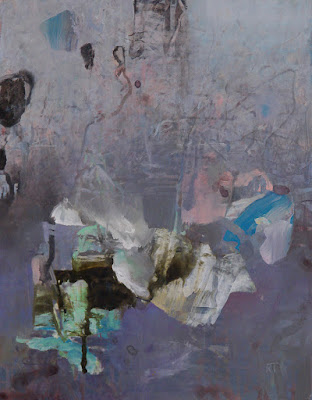 
I thought I might have one more Fanno Creek Ice Fog in me but that well had run dry. Instead this odd abstraction remained in the end. It reminds me a bit of some of John Altoon`s work from years ago. He was an early hero of mine though he had already died at 44 when I became aware of him. 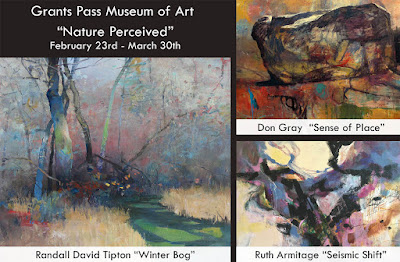 Nature Perceived continues through the month of March at the Grants Pass Art Museum.
Ruth, Don and I were all in attendance for the opening. It was fun meeting some of the local artists and patrons. 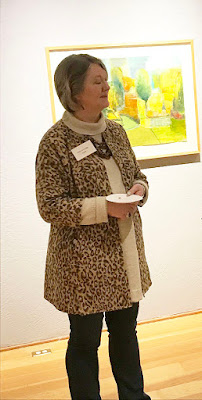 I`m terrible at documenting anything, this photo doesn`t do Ruth`s intelligent face justice.
She has developed so quickly as an artist it`s hard to keep up. Five years ago she abruptly gave up the figurative work she had been doing for years to begin painting abstractly. The new paintings were loosely based on her memories of the family farm and her deep Willamette Valley roots. They were and are powerfully dynamic with a lyricism all her own. Sometimes I`ll gasp when seeing a new piece. She`s never predicable. 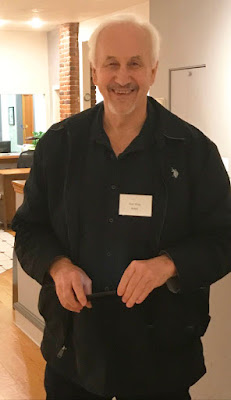 At 22 Don flew to Chads Ford Pennsylvania, unannounced, to meet Andrew Wyeth. The artist was home and he critiqued Don`s work and showed him work of his own that had never been exhibited. The chutzpah and naiveté in the young Don is so endearing. He did indeed go on to become a professional artist and supported his family in the process. He is beloved by all lucky enough to know him. 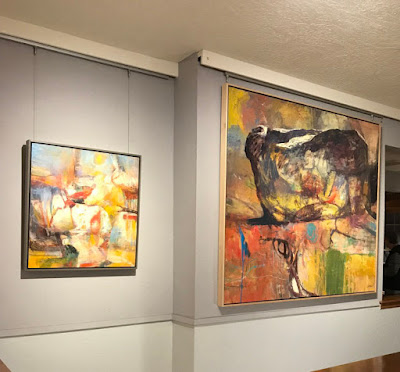 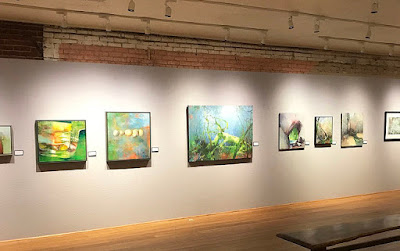 
From Grants Pass we drove north to Roseburg to see a collector/friend and her new home perched above the glorious Umpqua River. 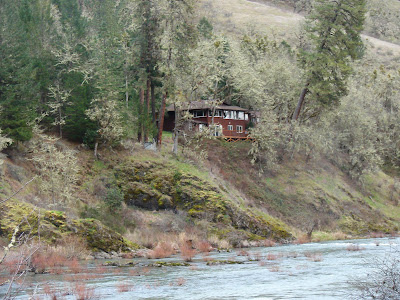 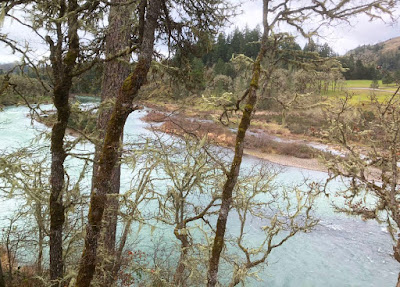 From there went went upstream to visit Falls Creek, an exquisite little rainforest canyon I was fearful had burned in the huge fires of last summer. It was intact and gorgeous and I made my way carefully up the trail with my cane. 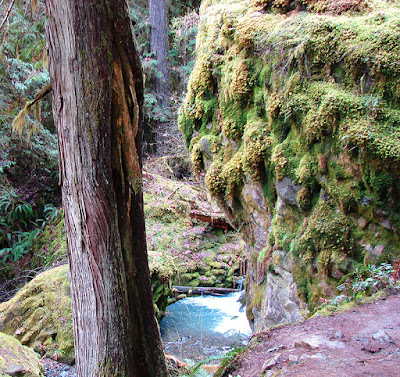 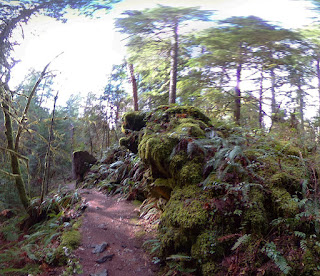 Small road trips can be as refreshing as a longer vacation. It`s always good to get away and then return ready to take up our life again.


Everyone has their position on the second amendment and most people agree something must be done about the mass murder so common in our country. I believe we owe it to our younger citizens to hear their thoughts on the matter as their lives are most at risk.
Listen to Brandon Wolf.
The political involvement of young people can stop a war. I`ve seen it happen. Beware these kids. 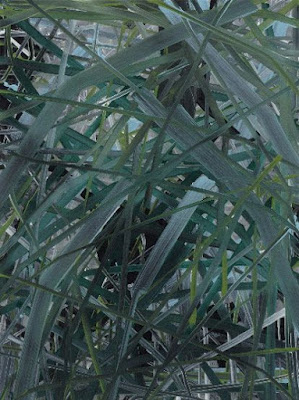 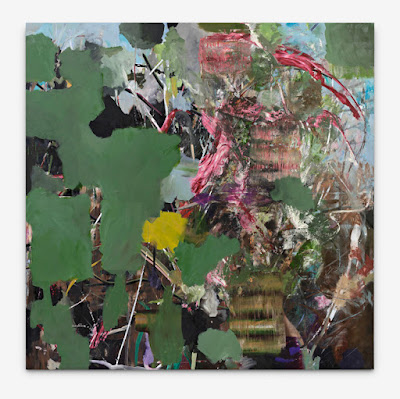 Without anything literal, Schama`s work is drenched in nature. This is the kind of work that really captures my attention, I don`t want to stop looking.


Read any good books? I`d love to know what they are.
At the suggestion of a friend who was visibly moved when talking about it, I just finished 'Paris in the Present Tense' by Mark Helprin. I listened to the Audible.com reading by Bronson Pinchot.
It`s been a long time since I`ve heard a story as atmospheric and sensual as this with such an ethical protagonist. Highly recommended.


work for sale in my studio
Posted by Randall David Tipton at 10:20 PM 6 comments: