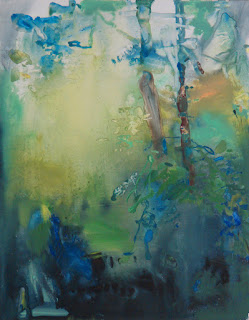 Above the Canal 2 watercolor on yupo 14x11


A couple of friends and a Facebook algorithm have contacted me to see if I`m OK. They noticed I haven`t posted in a while. More often than not, when I sit down to write and show my new work, I really don`t know what to say. That doesn`t usually stop me. But I`m sick of my knees, sick about our country and until recently, didn`t have much painting to show either. But I began working outdoors in the warm light with my pals and it has helped me a lot. I painted the piece above last Friday on the bank above the canal. It began with lots of random brushstrokes and a poured on wash for a background. It didn`t take long for it to develop into an image of what I was feeling that morning, sitting in that rainforest above the water with my buddies.
We had two guest artists [anyone is welcome] along and the setting was lovely. Our long wet difficult winter has produced an even more extravagant spring than usual. Everything is huge and healthy. 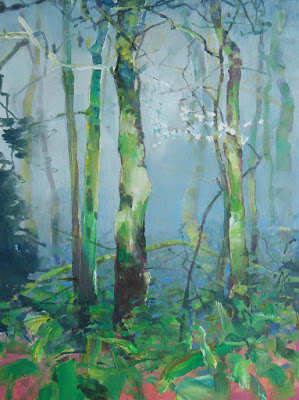 
This is a rare commission. My cousin wanted something like the post card sized painting I had given her two years ago. I thought, 'I can do that'. The whole task of painting by request is tricky business, too much most of the time. The client has legitimate desires, the artist has a personal vision. Getting these in agreement is not something I`m good at. Yet I paint forests all the time so I thought it a small risk. She`s on vacation so I don`t know what her reaction will be but if it isn`t what she hoped for, I`m fine with that. It will find a home in due time. 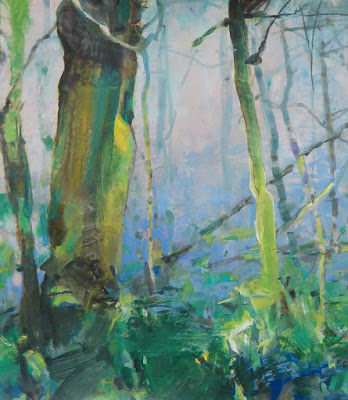 
A practice exercise before hand. 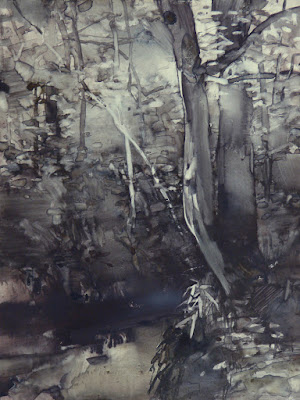 Along the Canal watercolor on Yupo 12x9


My plein air effort from a week ago. 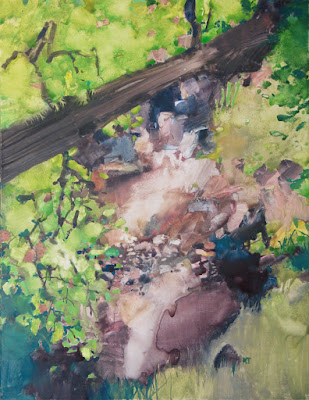 
The demonstration painting I did in my studio on May 20th. I will revisit this I imagine. It doesn`t live up to its potential. 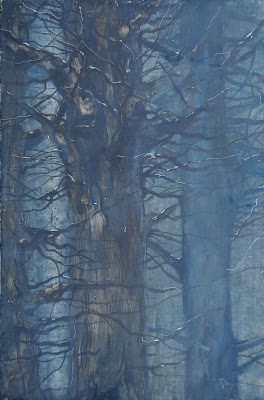 
My first and only egg tempura, painted when I was nineteen. It`s a view from a tree I used to sit in, I was a devoted tree climber. I remember sometime in my 50`s realizing with sadness I wouldn`t be doing that ever again. 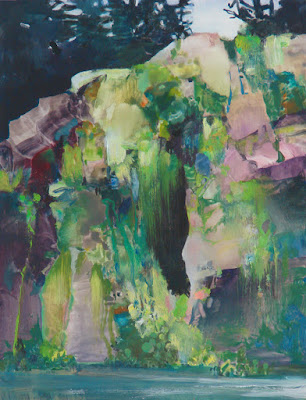 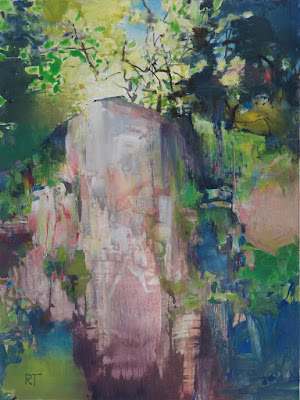 
The two above were rescues of plein air attempts I made in a boat last year. They were awful and now are better but still fall short of doing that bluff justice. It`s an heroic mass of basalt rising out of the lake with all manner of colorful and decorative vegetation spilling from it. It reminds me of a Christmas tree.


After the election, in my despair I wanted badly to be of use to someone. Use my white maleness to protect something. The fear of what had just been unloosed was palpable.
Last Friday three men on a train in Portland were attacked for doing just that, shielding someone vulnerable, a muslim young woman and her friend. The men were stabbed in the throat and two of them died. Everyone is aware of the story.
That this unspeakable horror happened in daylight, on a commuter train in ultra liberal Portland has the community in shock. I`ve asked of myself since, would I have done anything? Would I be brave enough to confront a raving racist man? Would I remember and honor my instinct to protect? 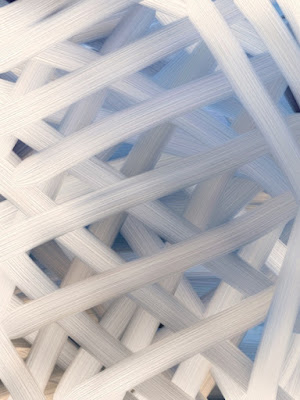 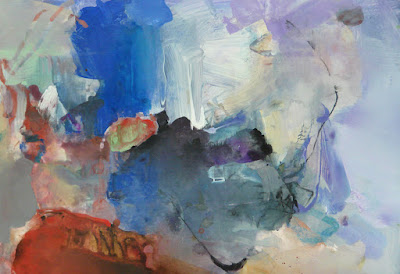 Inside Passage watermedia on Terraskin 9.5x13.5 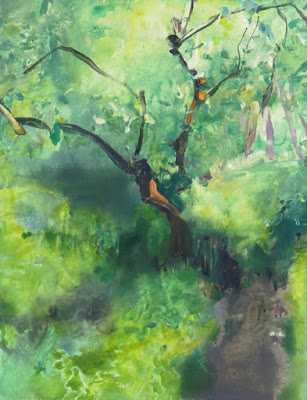 
Still aimless and liking it. Professionally, I should be working on larger oil paintings but that doesn`t seem appropriate at the moment. Lots of stuff percolating in my mind and for once I can pay attention. Being so unsure of the how and when of my recovery, I cleared most everything from my calendar. Doing so has left me with the time to think. In the end, it would be great if I could use the experience to become a better painter.


If the state of our country is a relentless worry, finding a way to make a difference and stay sane is a worthy ambition. Not surprisingly, psychotherapists have their hands full right now. On Facebook I read an essay from Robin Chancer, a therapist, on finding this balance. It was super helpful to me and I think others would similarly benefit.
Optimism can be a way of avoiding responsibility.
I think I`ve been guilty of that. 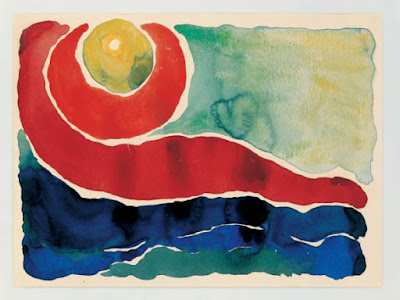 
A couple of years ago I began a search to find out what the paper was that Georgia O`Keefe used for her modernist watercolors from the early years of her career. These paintings are extremely sensitive yet simple. Betsy Chang had been curious too and sent me a huge pdf file she had obtained from the Museum of Modern Art in New York. It contained detailed information about the materials the artist used. The watercolors were painted on 'cartridge paper', basically cheap and non-archival. I expected so as she was teaching school and probably didn`t have much money.
Anyhow, Betsy and I became friends. Here is one of her glorious watercolors; 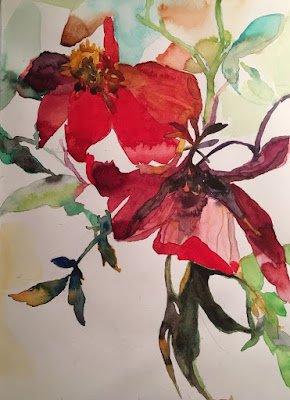 
A few days ago I was avoiding work and decided to google myself. There I ran into a very flattering blog post Betsy wrote about me a year ago. Immodestly, I present you the link.  Thanks Betsy!


work for sale in the studio


This is from my residency at the Sitka Center in 2014. I was so intent on painting a 'narrative' abstraction, this was underway within an hour of my arrival. I think it`s a good example of how rich, color appears on the plastic paper Yupo.
My most recent efforts have lacked merit to put it kindly. I`m still a bit disconcerted by what happened to me this winter. But not too concerned. A conversation, a new series, a hike, a brush, Pinterest inspiration...something will spark my enthusiasm and help me settle into a productive practice again.
I did paint on location this morning and enjoyed it completely. My pals Mitch and Burt were there and the weather was perfect. It was sublime sitting there enjoying the views and warm breezes above the banks of the Willamette. 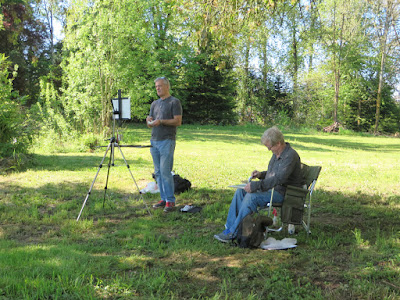 
It`s our plan to do this on Fridays throughout the summer. If anyone would like to join us, speak up! 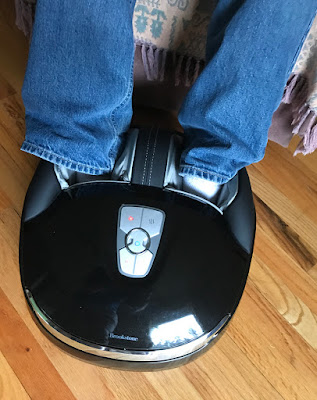 This is my new foot massager. I`m getting it ten years after my retirement from the restaurant industry but better late than never! I`ve wanted one ever since slipping into a sales model at the Brookstone in the airport many years ago. It is awesome, let me assure you! 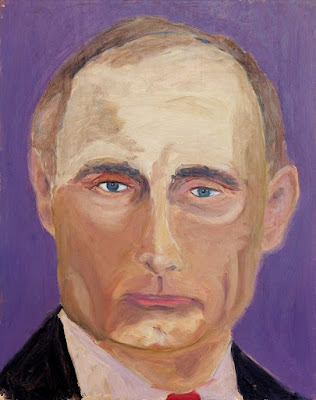 
Yes that George W Bush. Who would have ever guessed? I think of him as a war criminal but I have to say, the guy has talent. There is a new book out of his portraits of military service people and many of them are worthy of Alice Neel. In this link you can see more of them. I am no fan of our 43rd president but I do find it heartening that even someone with so much blood on his hands also has enough sensitivity to paint a psychologically penetrating portrait.
Human beings will always have both destructive and creative impulses at play in the confusion of our minds. 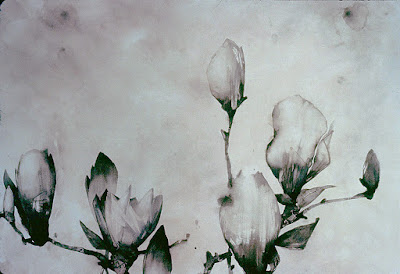 
work for sale in my studio
Posted by Randall David Tipton at 8:38 PM 5 comments: