Greetings, I was happy to return to a soggy vibrant green landscape after watching two huge fires roam over two mountain ranges. 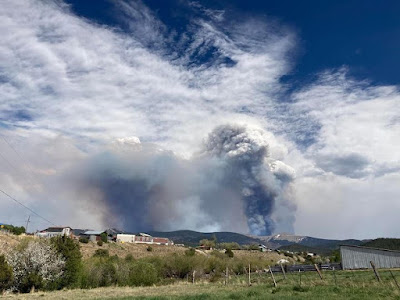 John was not. Like many native Oregonians, his patience with rain is just over by May. May is a summer month, damn it. The winds of New Mexico gave us the famous panoramas but framed at the edges by smoke. Having been a New Mexican, I feel protective of that special place. In a good year, with no drought, the state is always in need of a good rain. At least a half inch please. Now, with water so scarce, the humidity barely registering, the sun searing the landscape all day every day, it feels fragile and combustible. But it wasn`t hot, not yet. With luck the monsoons will return again this summer. Like they did last year. Like they always used to. When I moved there in 1976, a typical summer day was jewel like in its beauty.  Every morning awaken to a cloudless blue sky and a delicate cool dawn. By 9 or 10 am the first tiny scouts appear. Seemingly lost aimless clouds floating by. Then they begin to organize into a front. Here they come steadily crawling over the mountains in the east. By 1, some break off and temporarily block the sun. Others gather into immense thunderheads at the edges of the valley. The height of them scarcely believable. The thunder can be heard in the distance by 3 pm, and very close by 4. If you happen to be in the street or in a garden or on a walk, you will be drenched at any moment. The wind rises up and a huge volume of water is dumped in the course of a few minutes. Then it`s over. There was always a lull as I rode my bike to work at 5. Often there would be a second round at sundown but not always. The next day would begin again in just the same way. I`m telling you, this was absolutely thrilling at 22!  I was from a hot smoggy southern California suburb with precious little visible 'nature'. Shortly after I arrived this daily spectacle commenced. Everyone took it in stride, everyone expected it. It was July after all. Daily this violent drama played out until Fall arrived.

Unfortunately the summer monsoons have become very erratic and sometimes never come.                The tiny Hispanic villages burning to the ground now will rebuild. A culture that survived four different governments and a flood of pioneers isn`t going to disappear. It`s just so sad. People with very little now have no homes.

One thing I was able to do that I`ve wanted forever was to walk in the bosque of the Rio Grande in Albuquerque. Huge ancient cottonwoods line the river as it passes through town. I figured there would be trails but it was even better than I had hoped for. No litter or encampments but occasional benches to rest on and enjoy the view; 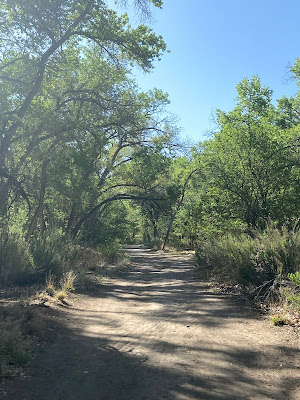 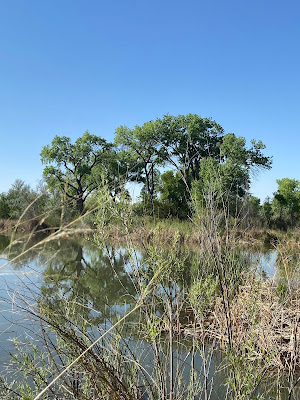 To my surprise, I loved Albuquerque. The crucial factor was the season. it wasn`t hot yet. I used to be there in late June helping a friend at the New Mexico Arts and Crafts Fair. We sat away from the booth slumped in lawn chairs in the shade and were incredulous when there was a customer. It was so hot, the heat was a thing. One of us would have to drag ourself up, contend with the beast and assist the art lover. It`s why we were there but the only thing we thought about was the inferno around us.

So could I live there? I don`t know. Maybe with some giant trees in the yard. 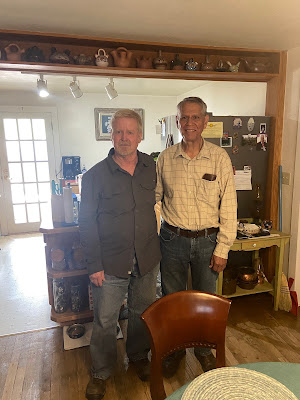 That`s my pal Dan Jaramillo standing next to me. We had lost touch over the 28 years I`ve been in Oregon. I heard he had written a book about the village of Chimayo where he grew up and I lived briefly. He`s a historian of sorts and I was so glad the story of that unique community had been chronicled. With the Manhattan Project, the lives in those small New Mexican towns were changed forever. The laboratories that developed the first nuclear weapons were in nearby Los Alamos. Good or at least better jobs than growing chile were a short commute away. Subsistence agriculture was abandoned, the English language infiltrated homes and the higher standard of living was just too attractive. The character of those societies was radically altered. Gringos like me came in and thought that sad. Others, like Dan, decided to commemorate it. He wrote the book and opened a museum dedicated to preserving some knowledge of that way of life. He did not curse the darkness, he lit the candle. 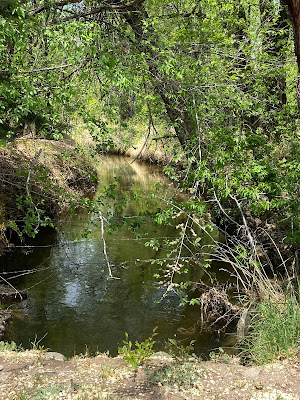 the acequia, the ditch that irrigated the fields and gardens 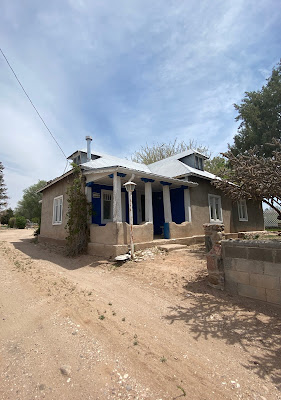 Dan`s cool house. That his parents built, he grew up in and where he raised two of his children!

After leaving Chimayo we drove the high road into Truchas. Just a village clinging to a mountain with a breathtaking view of the Truchas Peaks. We were on our way elsewhere but I wanted to see the whole place again. I saw a sign that said Karen Wippich Studio. Wait a minute, I know that name, she`s from Oregon! Open by appointment but she noticed us in her driveway and invited us in. Karen is an exceptional artist using collage. Her work was beautifully hung in the most unusual house I`ve ever been in. She said it had 11 different levels and was anchored to the side of a bluff. 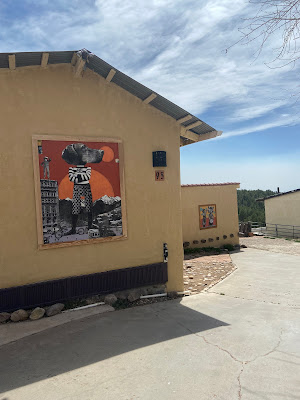 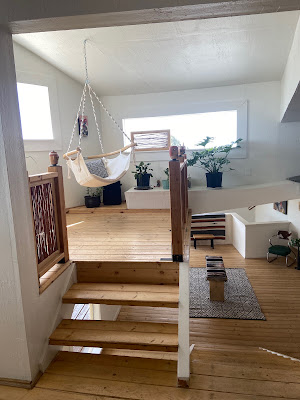 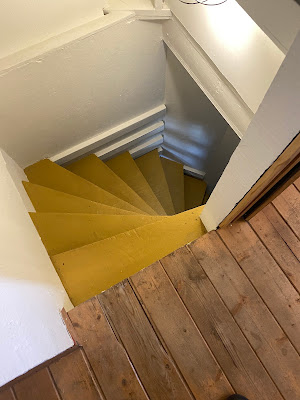 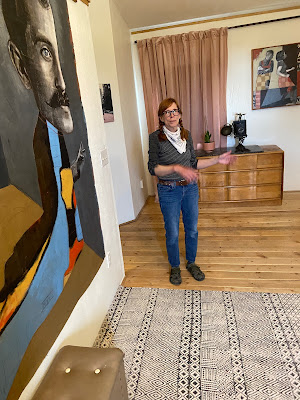 Karen
As you can see she arranged her work thoughtfully in all those immaculate rooms. It`s really good stuff but the building, she herself and her incredible daughter were just too commanding!, I couldn`t really look too well and we were expected at someones home further up the mountain. I asked Karen how in the world did she get there? She said she was lost and asked a guy for directions. Then later bought his house. Believe it or not, a version of that tale is very common in NM. Cars always break down there and the drivers never leave. 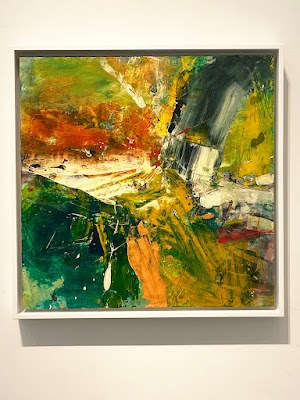 I was really excited to see Henry Jacksons show at the LewAllen Gallery. His work is dynamic and his color sense uniquely his own. This was a show of all abstractions though he also paints loose interpretations of the figure which can be haunting. 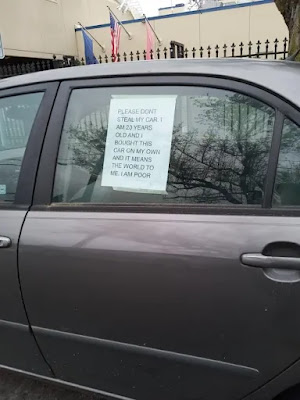 This was posted on a subreddit about Portland. It is heartbreaking. Car theft and vandalism are rampant in Portland right now. 900 missing cars in just Sept. of last year. Why is this happening? Fentanyl is why. Its usually called heroin but in reality it isn`t anymore. It`s this new cheap synthetic opiate causing all the overdoses and the crime to purchase it. The ingredients come in through the mail and because it`s so strong, it`s much easier to conceal. For once I don`t have any idea how we should cope with this menace. 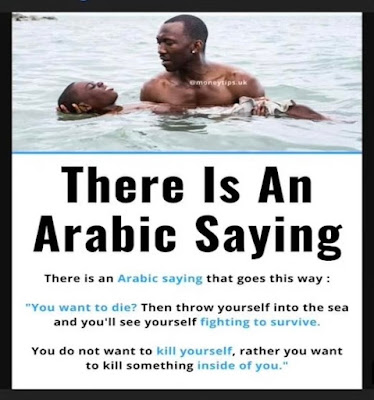 Well the photo is from the powerful movie 'Moonlight' and the text is reportedly from the 'Castaway' film, but this got my attention. My last post, which was about a suicide, was an education for me. It is not simple, and for some, just the idea of it can have a therapeutic quality. That was new to me. 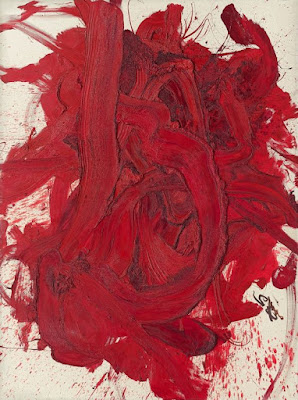 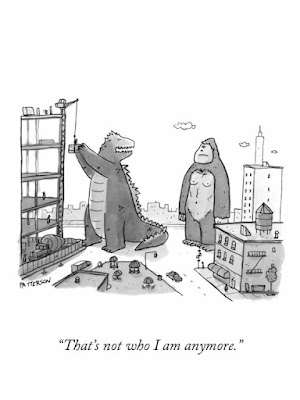 Click HERE for work for sale in my studio
HERE for prints [new images added]
Posted by Randall David Tipton at 10:08 PM 5 comments: