Above the Silver Creek 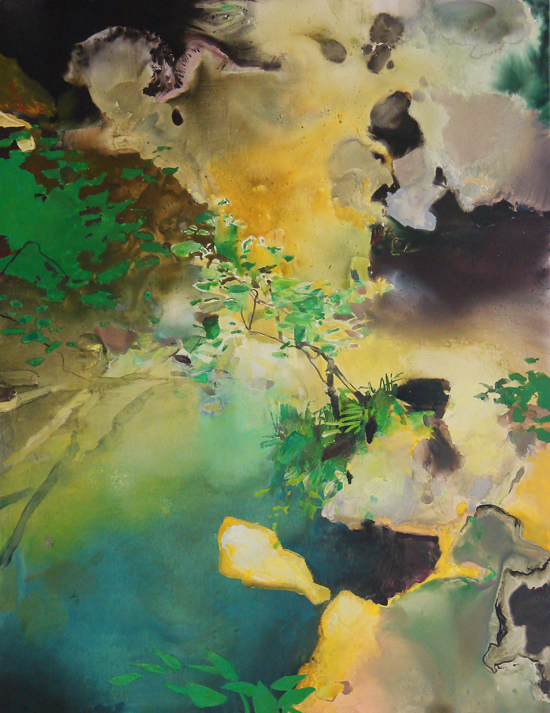 In a sense, this took eight years to paint. In July 2006 we were hiking in Silver Creek Falls state park and we rested on a bluff overlooking the water. In the bright sunlight high above the stream, it was difficult to make out exactly what I was seeing. There were golden highlights on the moss and rocks, foliage shifting with the breeze and silky water barely moving around the boulders. Reflected light was bouncing off of everything. I took some pictures which captured the spatial ambiguity, then I tried to paint it. Repeatedly. I never got it right, it felt like I wasn`t 'mature' enough yet. Well I have a new batch of Yupo from Cheap Joe`s that seems particularly responsive, so I gave it another go.

Nature in the Abstract by Lynne Cunningham

work for sale in my studio
Posted by Randall David Tipton at 9:58 PM 4 comments: 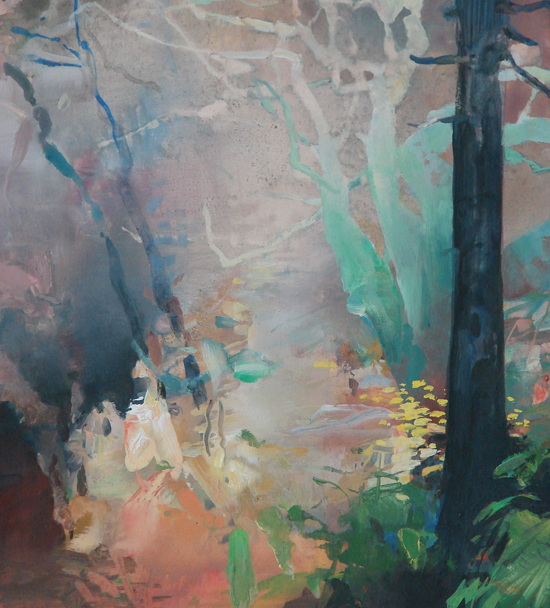 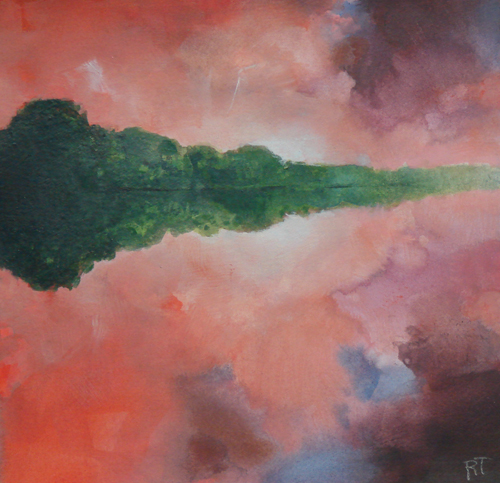 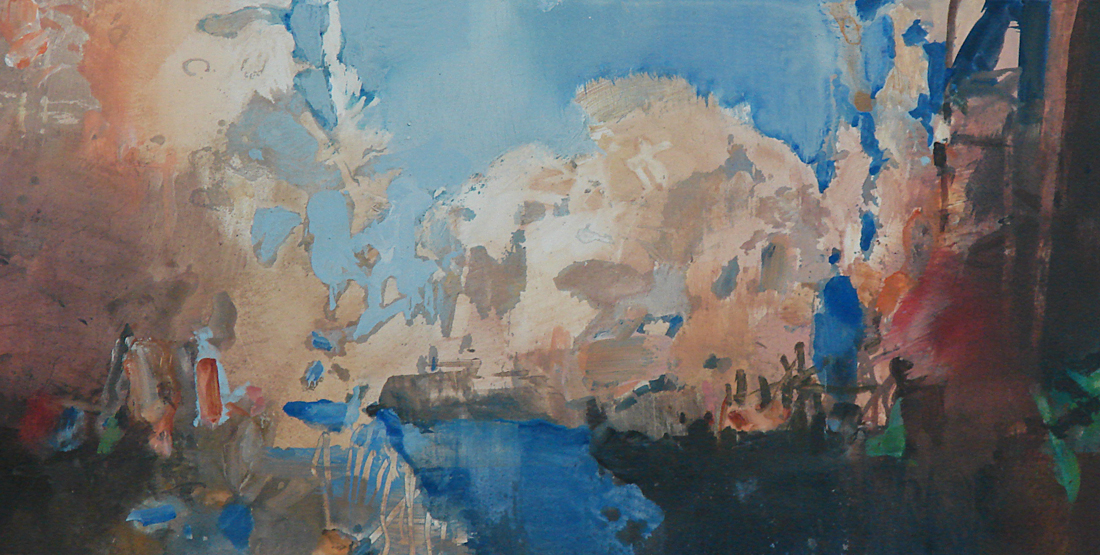 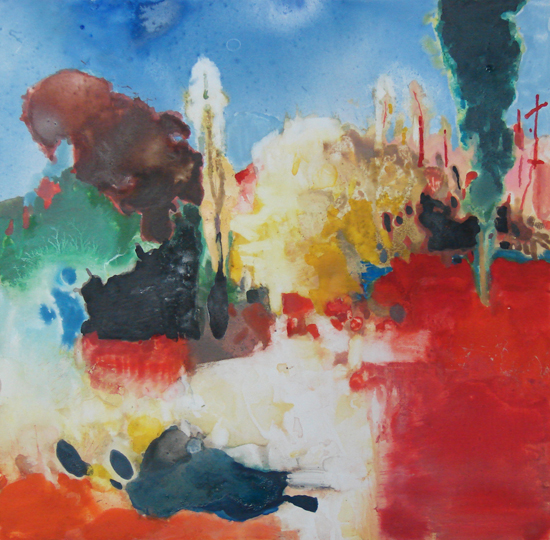 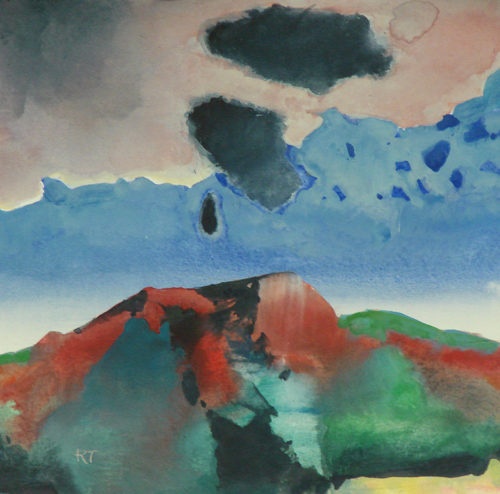 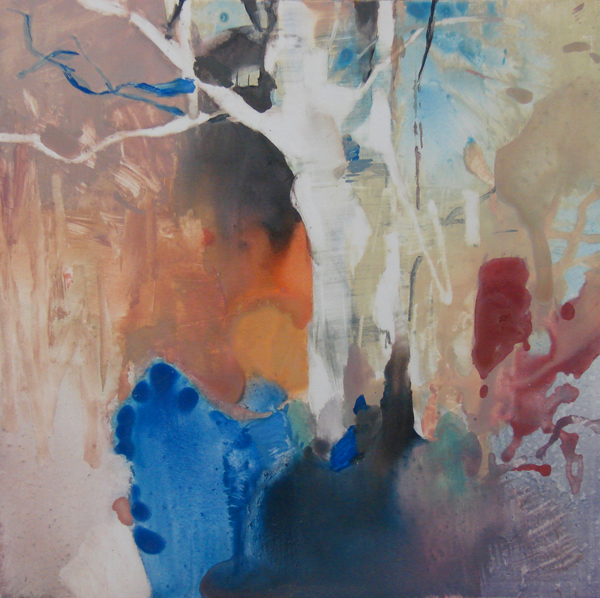 These aren`t really studies, they are more like doodles in their mindlessness. Between projects and especially after disappointing efforts, I work small. With little intention other than keeping me in the game and restoring my confidence. I have to make something.

Lynne Cunningham kindly included me in her new book "Nature in the Abstract". In it she describes a variety of 'attitudes' and new ways to think about capturing the true essence of the landscape in a fresh abstract manner. Lots of photos of her ideas made visual, are included. It is well worth a look!

In November, after the Portland Open Studio Tour, I`m planning on having an open studio demonstration on the second Saturday, Nov. 8 at 10 am. If this is fun and worthwhile, I`m intending to do it every month on the second Saturday. There seemed to be interest last year during the Tour when I did a demonstration every morning. I`ve decided to back away from outright teaching but in demonstrating my techniques and approach, I can show how I do things while answering questions. It truly is an improvised way of working that is difficult to break down into 'steps' while I`m painting. Maybe someone will take something away from it they can use and if not, at least it will be free.

work for sale in my studio
Posted by Randall David Tipton at 4:00 AM 8 comments:

Edge of the Arbor - Plein Air 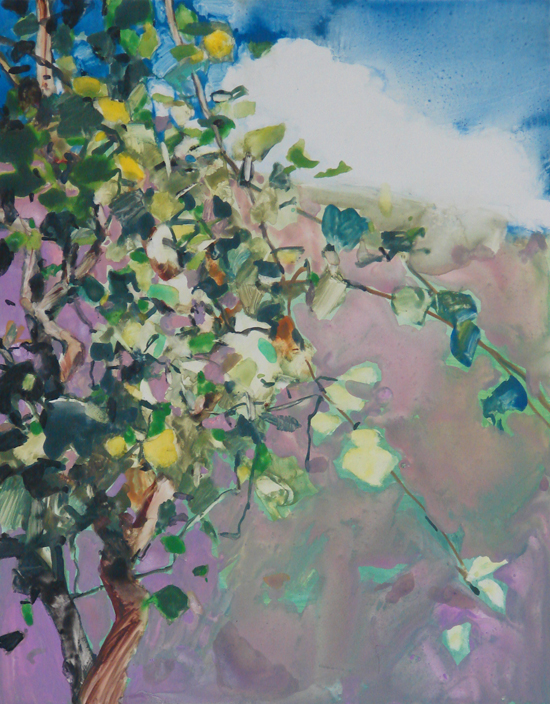 This is the painting I did at the Villa Catalana event last night. I was sitting under a grape arbor overlooking a summer hillside. The field I painted green and then thought differently. Too boring! So I got out my new tube of Holbein 'Lilac' and went over it, the green lifting to mix with the purple.
Lots of plein air painters I had read about were in attendance as were several friends. The charming hosts, Burl and Cindy Mostul, made the evening come alive.


work for sale in my studio
Posted by Randall David Tipton at 9:55 AM 5 comments: 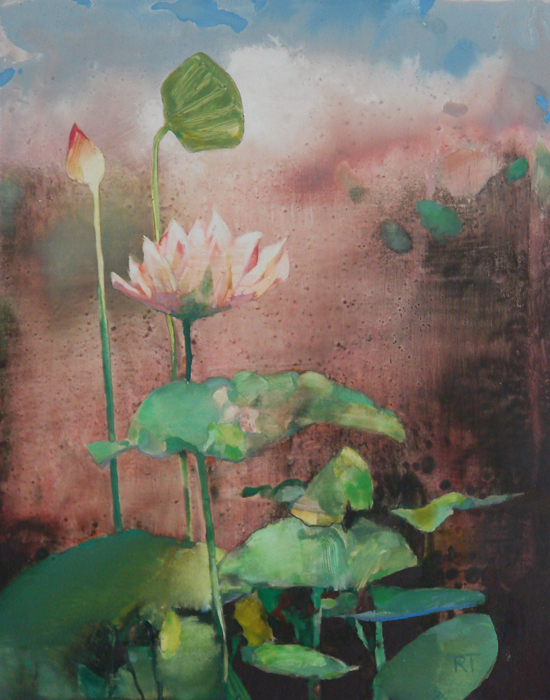 Years ago the once esteemed art supplier, Daniel Smith in Seattle, started getting cute by offering themed color sets and goofy paints made from obscure minerals. Trying to be 'fresh' I`m sure. They were relentless in promoting these useless items in their catalogs and I always wondered who would buy them? Well, someone died and I came into possession of several tubes of these Daniel Smith 'exclusives'. Here are some of the names; Genuine Zoisite, Sedona Genuine, Undersea Green, Blue Apatite Genuine, and Duochrome Arctic Fire. As if painting isn`t difficult enough with normal color! But they were free so I`ve played with them and all of those hand ground from 'rare' minerals are simply muddy earth tones that granulate. I hope they weren`t expensive!
My new supplier is Cheap Joe in North Carolina. Good prices, simple website, no obnoxious promotions and fast delivery. I`m very pleased.

I admit my bias. Even though I use it, I have no interest in photography. Cameras make me crazy and the terminology pushes me over the edge. Every time I have to submit something with 300 dpi I spend 15 minutes with a Wikipedia explanation and still don`t understand. I wait for John to get home from work.
All that said, I run into interesting images with some frequency. Check out Cody Cobb`s photography. He`s also from the Northwest and he has the brave heart of a poet.


paintings for sale in my studio 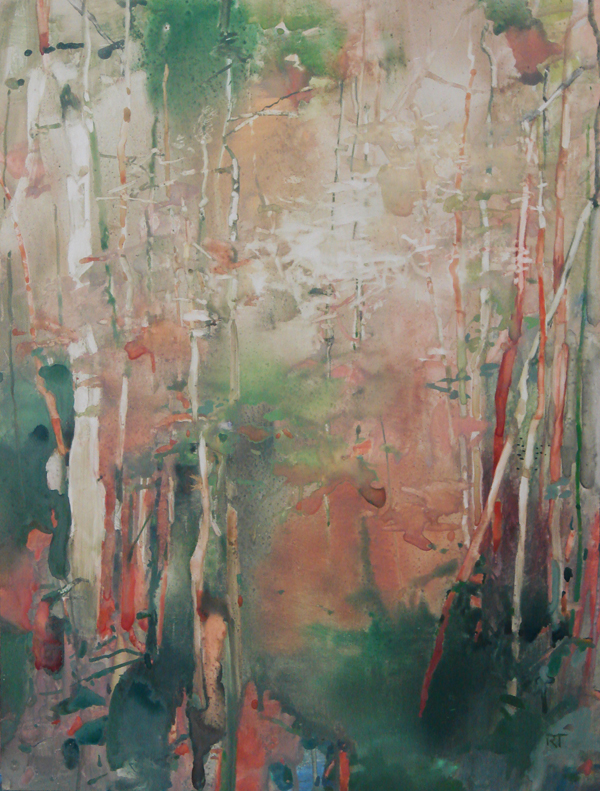 He said "put it away and leave it alone!"
I thought, if I`m lucky enough to be advised by Bob Lafond, I should do what he says! So I did, until the past week.
I`m not sure whether my intention is coloring my judgement, but it looks to me like the budding/about to burst forests I was so inspired by last Spring during my month on the coast.

I`ll be taking part in the Portland Open Studios again this year. Please come introduce yourself. Like last year, I will be demonstrating every day at noon. Oct. 11 and 12 & Oct. 18 and 19

I will also be painting on location at the Villa Catalana Cellars in Oregon City next Sat. evening Aug. 23 as part of the entertainment. There will be other artists as well plus a jazz trio and catered food all in a huge gorgeous garden. Talk to me while I paint!
Tickets are $10.


work for sale in my studio
Posted by Randall David Tipton at 5:47 PM 2 comments: 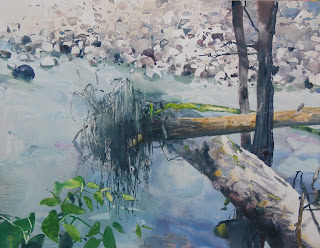 Another painting from my trip to Mt. Rainier.
The water coursing off the mountain is mostly melted glacier which gives it a milky look. The opacity comes from tiny particles of ground rock shaved off by the weight of the ice sliding over it. We were in a vast canyon carpeted with stones. A modest stream flowed down and crisscrossed the boulder covered floor. The mighty glacier that once filled this chasm had retreated upstream beyond our view. But it was easy to imagine.

Sadly, though he could not save his own life, Robin Williams may have saved others. I`m so hoping this tragedy will be a watershed moment in our culture and a serious, frank discussion about depression and suicide will ensue. That there is still so much stigma and taboo with these issues is appalling and pointless. We lose so many that may have been reached.
Depression was a crippling reality for me when I was young, but I was lucky to live in an age when promising research and effective therapies evolved and became available. I have been a grateful user of anti-depressants for decades. Though I never considered suicide myself, I know some who have. Each of them radiated pain like a furnace.
The subject of suicide is so utterly sad we choose not to think of it. I think that is a terrible mistake. If we are informed and understand the conditions for such an act, we might be of help.
Our local NPR station carries Krista Tippet`s wonderful show on the many varieties of spirituality called "On Being". One of her guests recently was the poet and philosopher, Jennifer Michael Hecht, who has written the book, "Stay: a History of Suicide and the Philosophies Against it". In that one hour of radio I learned so much, including this important fact; the actual act of suicide is very impulsive.
Beyond the facts around suicide, the point of her argument is that even leaving God out of the considerations, there are instinctual and intellectual reasons to reject it. Moreover we need honest commitments with each other where we promise to stay. We stay for each other. No one leaves early. We decide to stay, if not for ourselves in this moment, but for our future selves and for those we care about. If that pact is real, I think it will follow that we will have deeper bonds and more accurate insight into the lives of others. We might be able to help one another to stay. 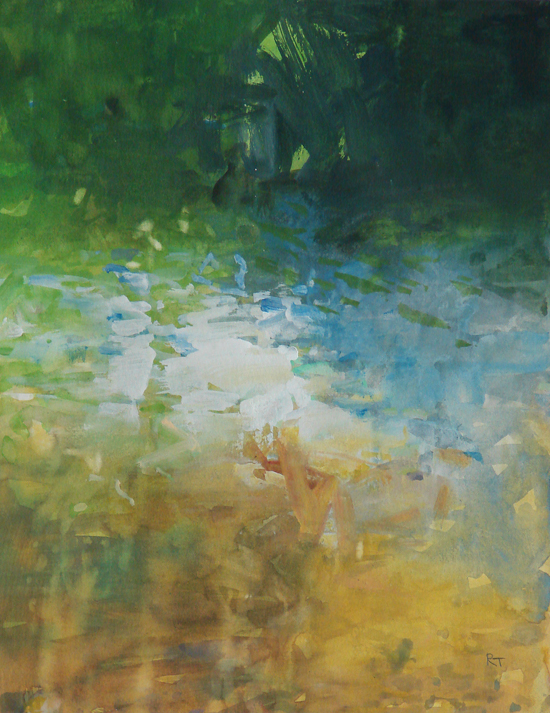 I was going to dangle some roots into this water and show the river bank but it was active enough. 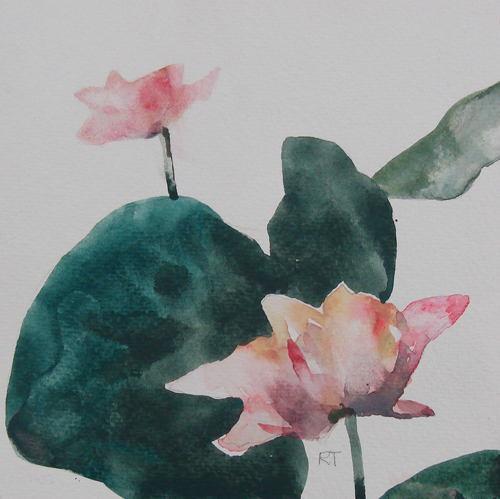 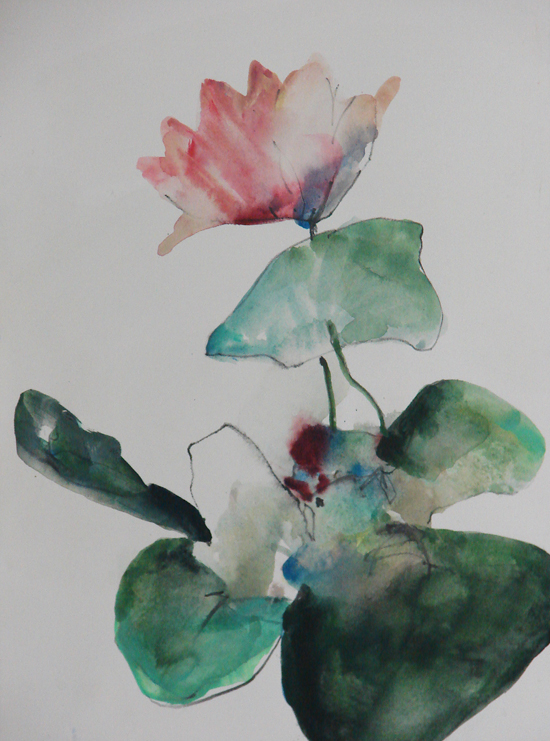 My first plein air experience this summer was with Ruth last Wednesday. We were scoping out Rare Plants Research, a nursery near her home. The owner, Burl Mostul, was seeking artists to paint on location for a special event, open to the public, later this month. To be part of the entertainment so to speak.
I had done something like this for an AIDS benefit and I enjoyed it.
So on a perfect summer day, we sat in the shade and painted the lotus and lilies in one of the ponds. Time slows down when painting on site and as often as I`m out and about in the forests, I`m rarely still. It was a sweet afternoon and we agreed to take part in the Garden Party. This nursery is remarkable for its unusual collections. There were potted 'trees'  from Madagascar lining a drive that were straight out of science fiction, Taro plants as black as night, variegated bananas, a Romanesque house and pergola, multiple greenhouses alive with odd specimens and lush grounds surrounding a vineyard. It`s a very unlikely, amazing operation in rural Oregon City! I had no idea.
Here is the invitation and link to purchase tickets, it`s going to be an interesting fun evening; 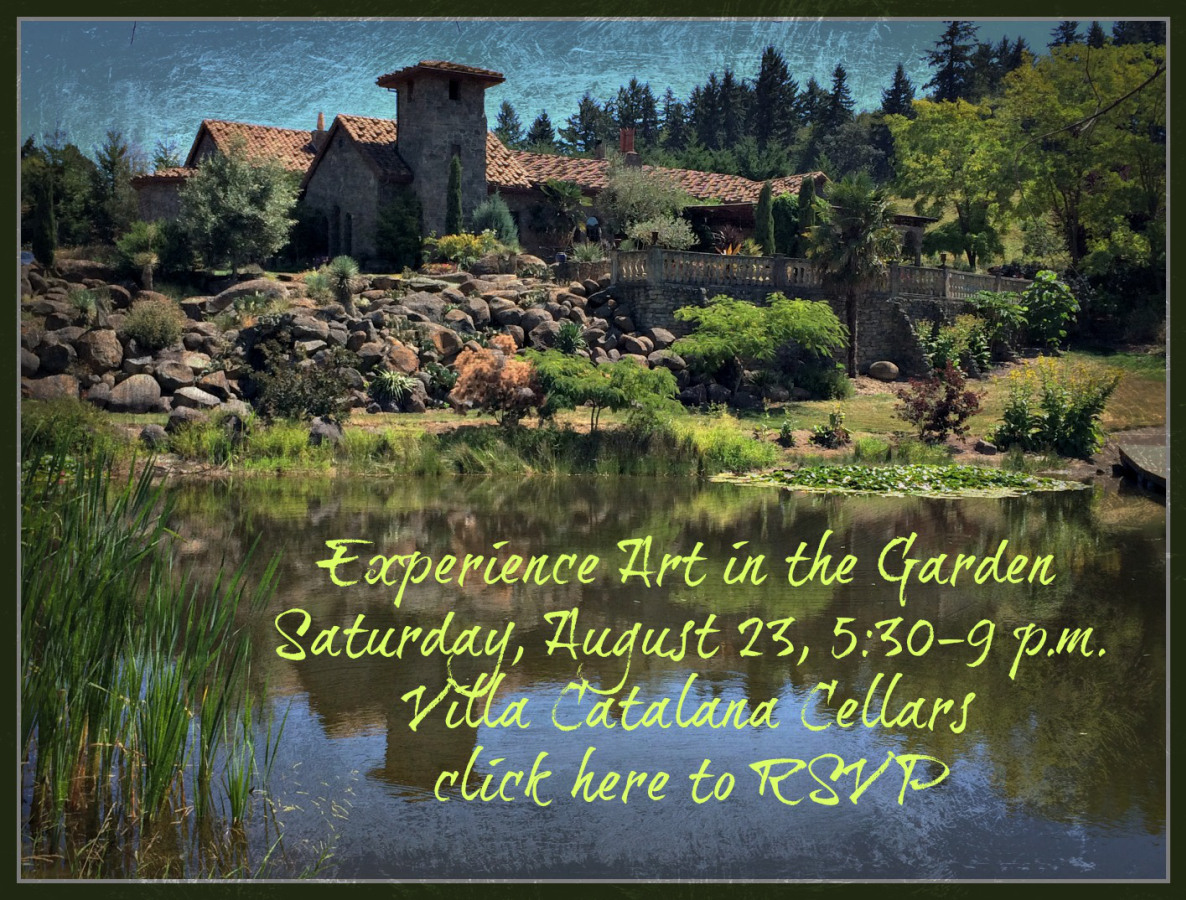 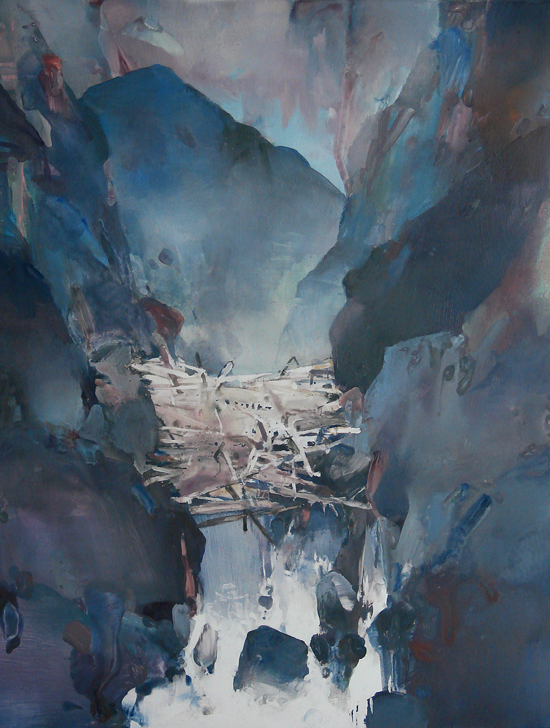 This was an unusual challenge.
Driving down Mt. Rainier a couple of weeks ago, I could see the road curve over a bridge up ahead. As I crossed it, I glanced upstream to briefly see a massive logjam wedged up into a chasm with a waterfall gushing out the bottom. My view couldn`t have been a whole second, but I knew I had just seen a spectacle, a scene of terrible beauty. The force of that flood dragging all those trees into this impasse must have been truly awesome. This is not the nature I see on my nice walks in the forest. This was brutal and impersonal. Such views are common in Alaska but down here it takes a National Park or somewhere remote to see this kind of evidence of natural violence.
It burned into my memory. Not the facts but the feeling of 'wildness'. That`s what I had to go by, having no recollection of of shapes, colors or scale. In a sense I paint like this all the time. I move paint around until it looks like how the place felt. But I usually have a photo or drawing to help build the scaffold. With this it was just a fleeting glimpse of hundreds of fallen trees straining against the mountain. I began hoping to execute a true watercolor, but quickly saw I would be doing major revisions all along the way so out came the acrylics. It was a battle.


work for sale in my studio
Posted by Randall David Tipton at 7:43 PM 6 comments: 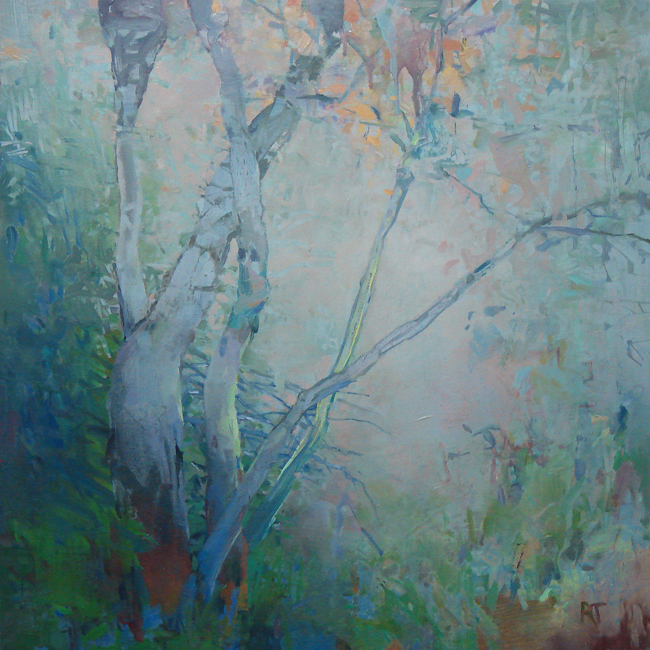 Although I liked the underpainting, the end result began to bother me; 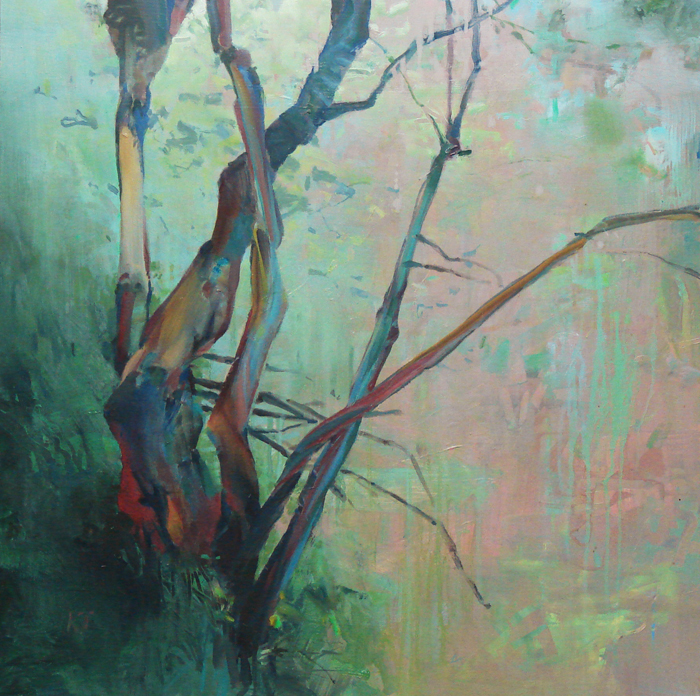 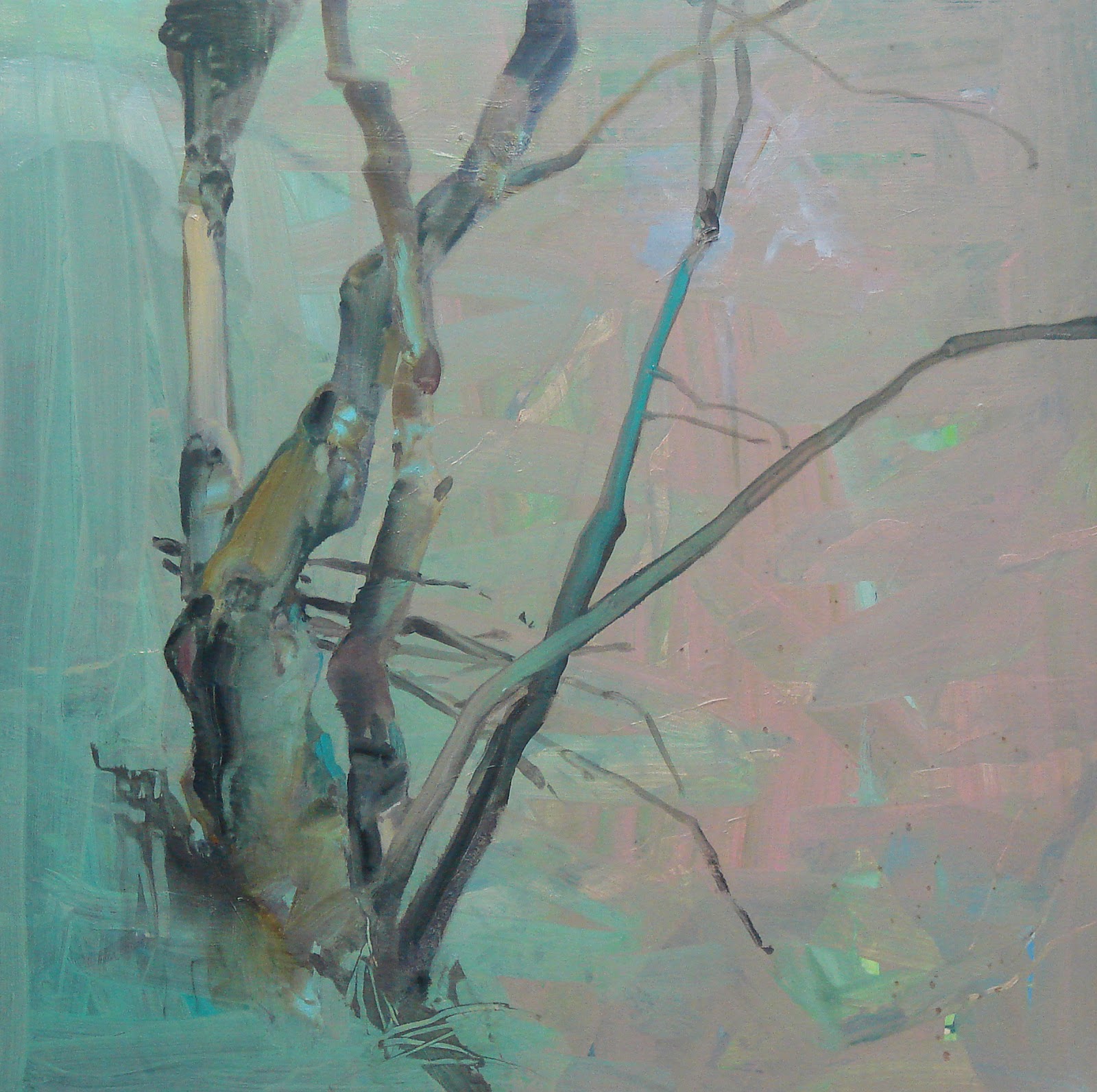 It was sitting around the studio and those lurid mint greens started to really annoy me. So I put a translucent white wash over the whole thing. This is my last resort strategy if the idea and composition had some true merit and I want to keep going. Then I began again. This time the 'corrective' whitish glaze suggested a kind of ghostliness that appealed to me and I went with it. It`s not at all 'accurate' but I can say definitively, it brings me to that cool, foggy trail in November.

Check out the German painter Karl Klingbiel`s work. Once again, because of Pinterest, I discovered a formidable artist I probably would never have heard of. He extends abstract expressionism in a fresh, personal direction using clear, vivid color and an active engagement with negative space. His work is staggering!


work for sale in my studio
Posted by Randall David Tipton at 9:38 AM 1 comment: