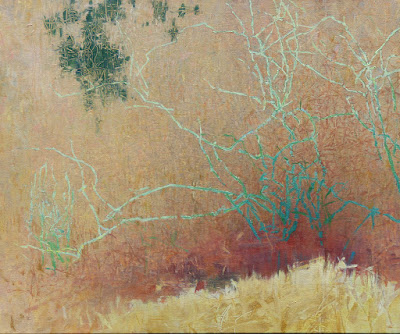 
The local parks where I live serve me well. The bonds I vote for translate into maintained places that keep to a natural low key vibe. Just what I like. No picnic tables or swing sets, a visiting child can look for bugs. Most of my paintings, like the one above, come from my walks there. Occasionally though I get out of town and if the trip allows, into someplace wilder. Not back packing nature but more like car camping. I carried a pack in Boy Scouts but never since. I may give the impression I`m hiking in pristine wilderness but I`m really a mile away from my home.
However last week, after a visit with nearby in-laws, we went to Silver Creek Falls state park. It`s a little chunk of old growth forest with multiple waterfalls and undisturbed rainforest vegetation. It`s a bath of green! 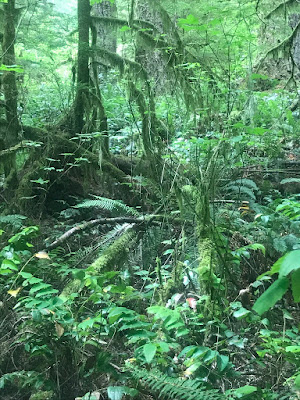 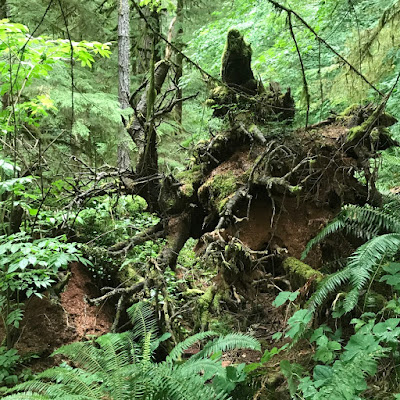 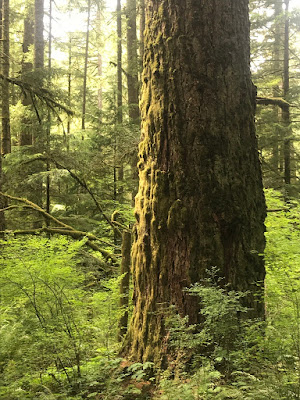 With some really big trees 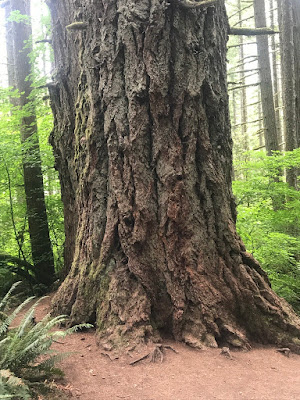 As you can imagine, the atmosphere of the place is kind of reverent.
I just finished 'Barkskins' by the wonderful Annie Proulx and she shows the consequence of centuries of logging. Because she`s a great writer, I could stomach the descriptions of the brutal massacre of the New World`s forests and the incredibly arrogant attitudes behind it. It is ugly and the genocide of the people living in those places, will surprise no one. It is the story of our country entwined with the history of the timber industry. As an Oregonian, I`m glad I`m better educated now about the business that first produced the wealth of my state.
This was painted a couple of days later; 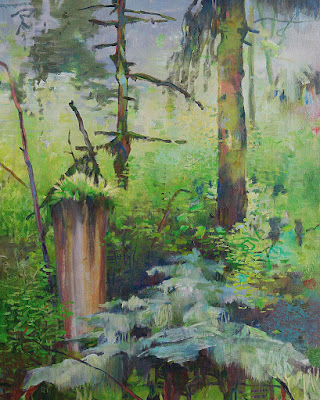 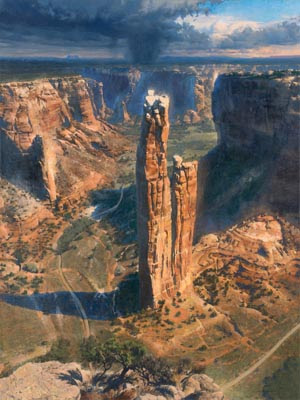 
A couple of years ago, I was perusing the vast Valley House Gallery website when I stumbled across Bob Stuth-Wade and it was like a jolt of electricity. How had this magical realist ever gotten by me??
He knew the soul of the Southwest intimately, and his technique is so precise and skilled , it`s utterly baffling.Yet he is not a hyper-realist.  He works from life on location and his intentions seem to be humane, even loving. He takes realism to a rare, maybe holy place. A Stuth-Wade painting is a clear view into the miracle of existence. 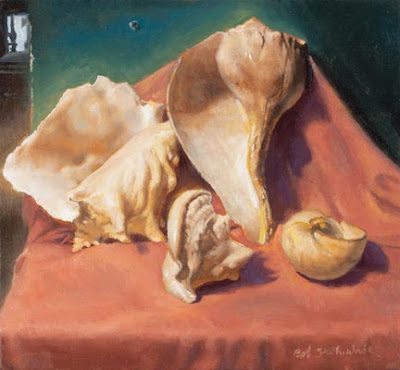 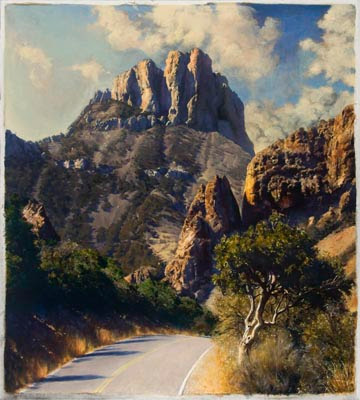 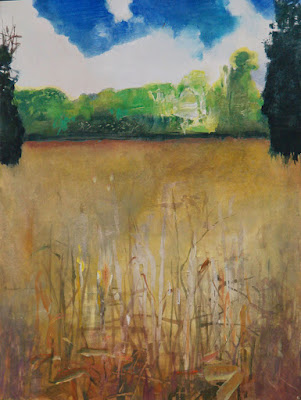 
I`ve done some more outdoor work myself. That meadow above is no other than the Bryant Woods meadow! That place just gives and gives to me. 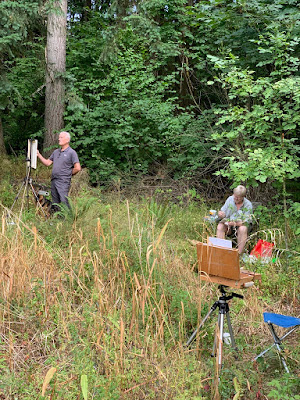 Mitch Burrell and me in a photo by Burt Jarvis. That was a fun day. I`m back to my old method of hauling around an awkward lawn chair and painting on my lap. The fancy easel I bought just wasn`t right and it took me a while to figure it out. The palette didn`t let me get close enough to the paper, I had to lean over it. Anyway being closer to the ground is nice. I was studying the grasses; 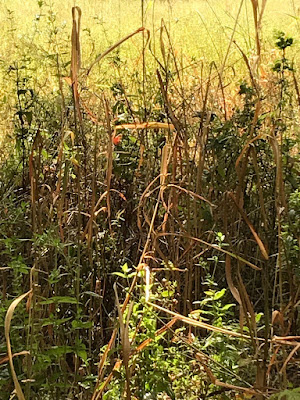 which led to this; 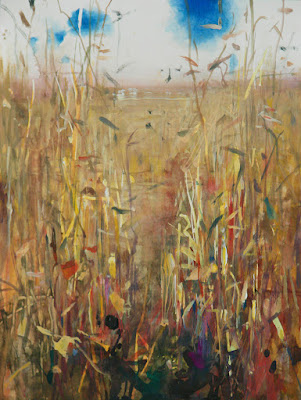 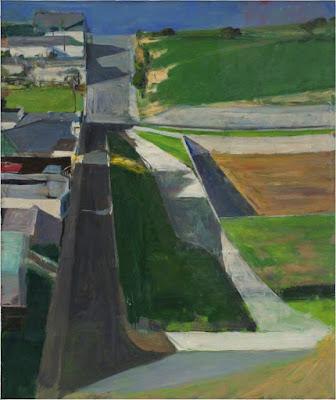 
"I can tell as soon as he turns up at the garden gate. I can tell if he had a good day by the way he carries himself, whether he fumbles with his keys, whether he says hi. Just a few weeks ago, he came in and said 'it`s all over. I simply cannot paint!' The next morning he left early and stayed in the studio all day without putting a single mark on the canvas, just trying to look at it in a new way. And then he came home and said 'I think it`s the best thing I`ve done'." Phylis Diebenkorn, from the Diebenkorn Foundation on Instagram. 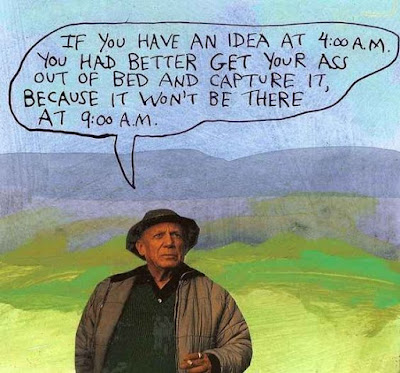 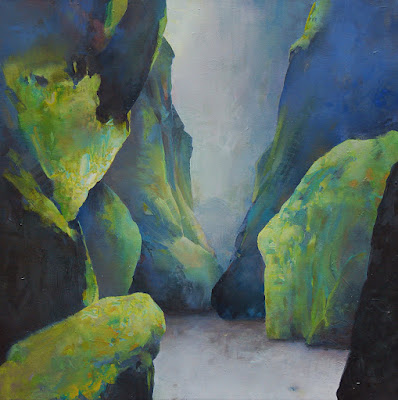 
This came together in a 12 hour day, it`s been a long time since I`ve done that. I didn`t intend to and as the day progressed, I started letting go of my other plans. This is an imaginary composition of the Oneanta Gorge in the larger Columbia River Gorge, and I had done a study years ago. Can something be a study when there was only memory to guide it? It felt great to paint in the 'zone' again but when I took it outdoors to photograph, the greens screamed at me. So then I spent several days adjusting them and in the end there is peace.


It can`t possibly last but Oregon is having a mild summer. Like they used to be and I am beyond grateful. In this new age of global warming, the sweetness of a day feels to me extravagant. I want to honor it. To that end, I`ve been painting outside some. The results aren`t too successful yet but these two cheered me on; 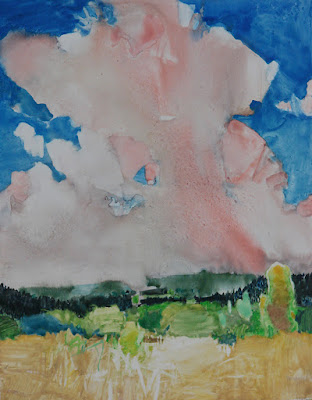 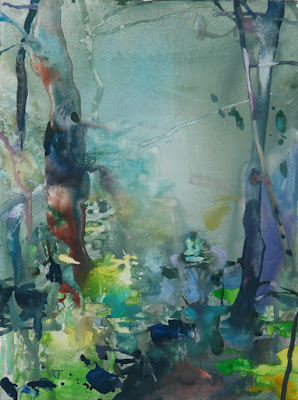 
Lots of unfinished oil paintings about but they are slowly coalescing. Very slowly. I`m close. 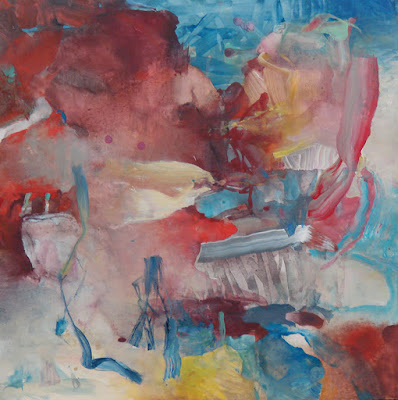 
As I plot my strategy for re-engaging with the oil paintings, I paint watercolors. Even a decent abstract one! 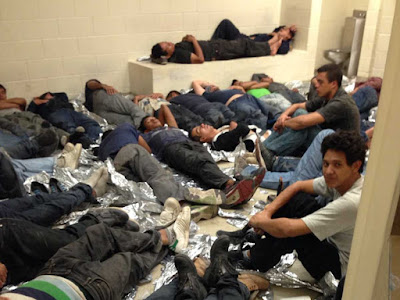 Everybody has seen the photos, most are appalled, but unless the courts order more humane treatment, these concentration camps at the border will persist. This is what the president wants and his party is mostly silent. Deterrence to immigration through cruelty. I am so ashamed of my country right now.

Illegal immigration is a persistent problem but these Central Americans are fleeing lawless countries menaced by drug criminals. They struggle to come here for the mere chance their children will be safe.
In my opinion, we broke those countries and we own them now. Where to start? We overthrew democratic governments to make banana agriculture profitable for American business interests. That`s where 'Banana Republics' come from. We supported dictators who enabled businesses to exploit those countries for any resource that was marketable. Our disastrous war on drugs caused these societies to degrade into vicious feudal territories ruled by drug gangs. We used those countries in a petty proxy war with Russia, ignoring the needs of the citizens but keeping their governments placated with foreign aid. So now a lot of those people want the hell out of there just to survive. It will never happen, but I think we need a separate immigration policy with those Central American countries. And major investment in their local enterprises. Throw in sensible drug laws since this is a fantasy.


And since this is a serious tone, here is an article by Bill McKibben on our new climate.

For now, the fate of our country resides in the Republican Party. Will any patriots besides Justin Amash emerge? Sure looks doubtful as that institution slides into fascist policies without a hiccup. The voter suppression alone is an outrage.
We all can see it. That damn red hat is a swastika. American style. 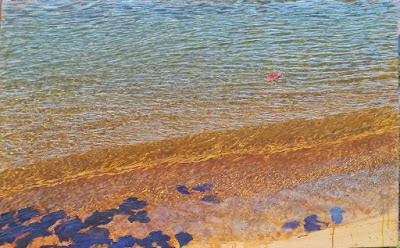 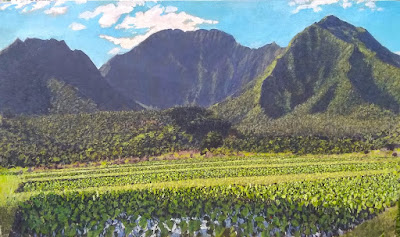 Look at these beautiful paintings by Jordan Ellingston.
A year ago he wrote me and invited me to come paint with him in Kauai. I could stay in the room he rented, he would sleep in a tent. Now that touched me, I`m a virtual stranger. He saw something in my work that had a commonality with his vision. I agree. There is an obsessive focus on the sweeping crystalline space of the North Shore that sure got to me when there in 2013.
Have you ever seen any paintings of Hawaii this soulful? 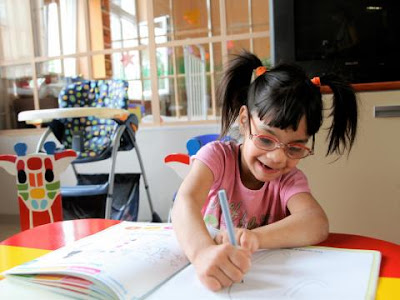 More research on the incredible power of drawing! This article caused me to examine my own resistance. As I`ve mentioned many times, I think drawing is a pain in the ass. But why? Well for me it might be because I try to make it utilitarian. I see it as preparations for painting. So when I can`t indicate mass without a bunch of tedious cross hatching I get frustrated. Maybe if I just let lines be lines. I`m not sure if I can. For many years I only worked from drawings so it is baked in. That practice made me draw a lot and I truly think it`s the foundation of what I`m doing. I advocate for it all the time yet feel so little joy. 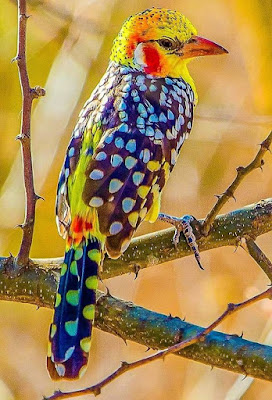