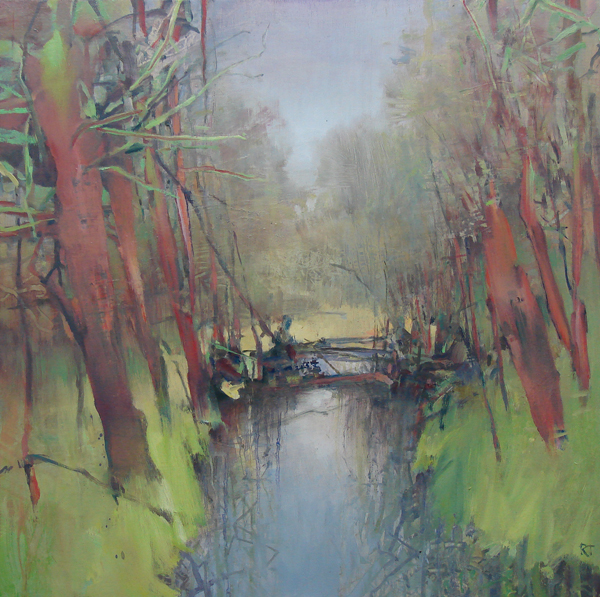 Winter Rain on the Slough oil on cradled panel 20x20

At dinner tonight I asked John what he was thankful for. He gave me a baleful look and said "Don`t start". I was kidding as I know how much he dislikes seasonal piety. But after a pause he began to list them and I was included. Such a simple thing to just stop and think of the good stuff. Yet I don`t often enough.
Once a year we`re collectively called upon to do this. Let`s give it some attention, let`s remember to do it.

When I posted the following poem in 2009 my father had recently died and my brother the year before. So had Maureen`s. I posted it again last year and now once more. She crafted this tender poem that assures us families remain families.


Thanksgiving-Rain in a Coastal Forest 2 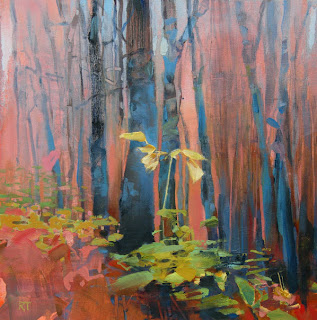 For those families once whole with the living, my friend Maureen Doallas has written a poem. Republished with her permission;


We were nine.
We were eight.
We are seven.


We were together.
We are apart.


We were mother and father,
five daughters,
two sons:


In Virginia and Florida,
New York and Tennessee,
in Georgia


We were a family.


We are a family
come together
with spirit,
with ghost


Eyes looking down,
looking up,
looking out


To a hillside in Arlington,
to a headstone in Venice:


Two to make
seven into nine.


To save
for blessings
round tables

On Saturday we`ll drive south to visit John`s parents as we usually do after the holiday. We always include a visit to Minto Brown Island. This incredible combination of nature preserve, wetlands, dog park, farm, playground and bike trails is the crown jewel of Salem. Its good citizens appreciate it too! I`ve been here in some truly inclement weather and still found it hopping. It`s big enough for everyone and I hear it will soon be directly connected to downtown by pedestrian paths and bridges. Our modest state capital is getting sophisticated!
Oregon dreams big. A hiking trail is in the works to connect Portland to the coast 90 miles away! Two things unite everyone in this state no matter the political persuasion, income, ethnicity, location, age or occupation. Everyone really loves nature and being out in it, and everyone gardens. Everyone. Walk into any nursery in April and it`s a frenzy of activity. Get this, there is an organization that will come take out your lawn, turn the yard into a vegetable garden, maintain it and give you some of the harvest. The rest going to the food bank! Thank God for Oregon, IT is something I`m grateful for!

The new painting up at the top is of Minto Brown. Here are some others, I`ve done many. 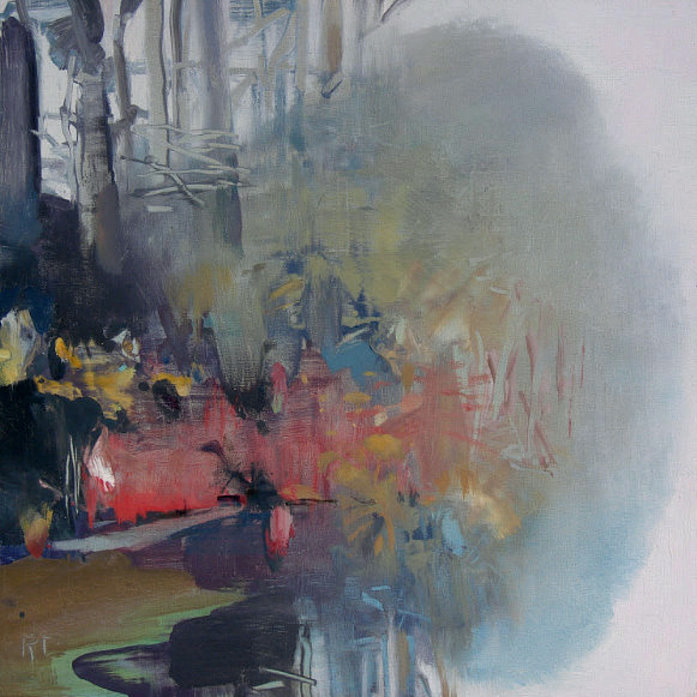 Cold Fog on the Slough oil on panel 12x12 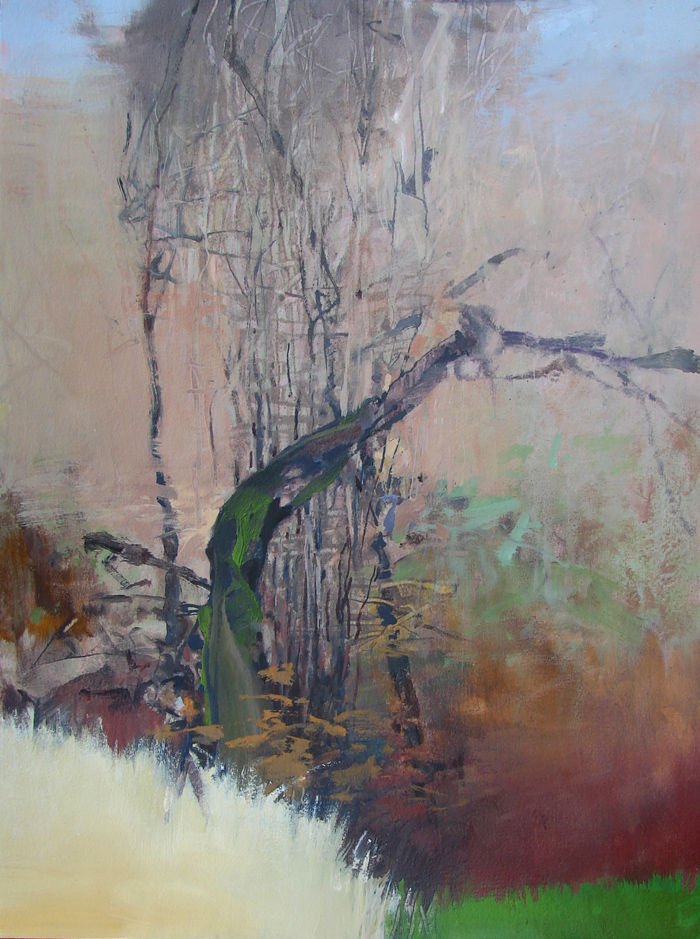 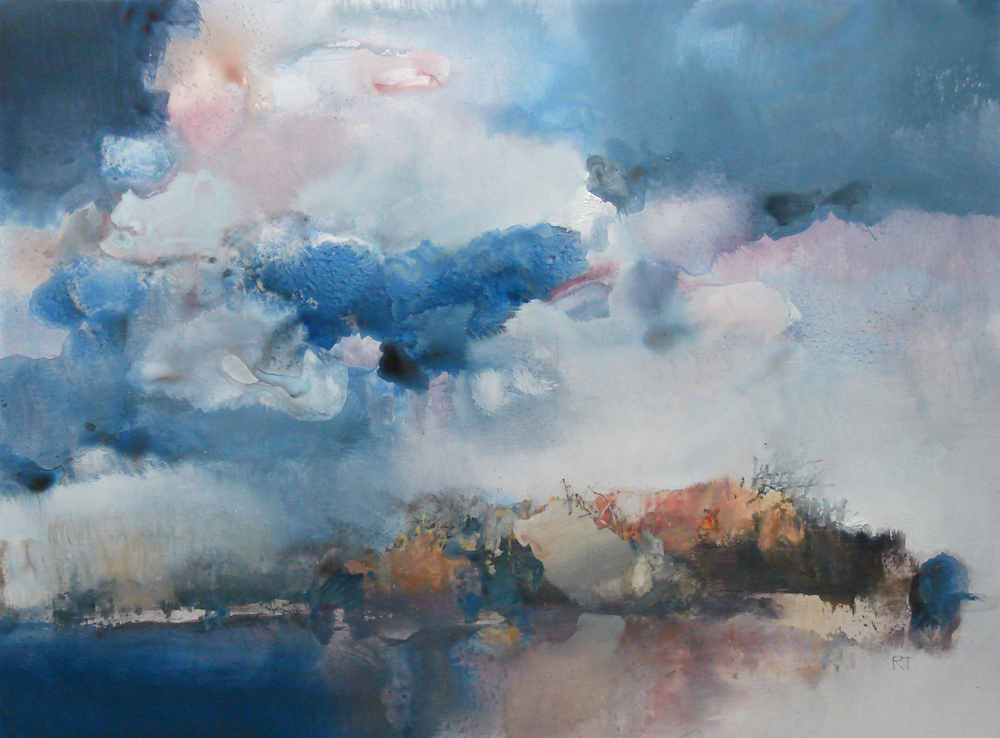 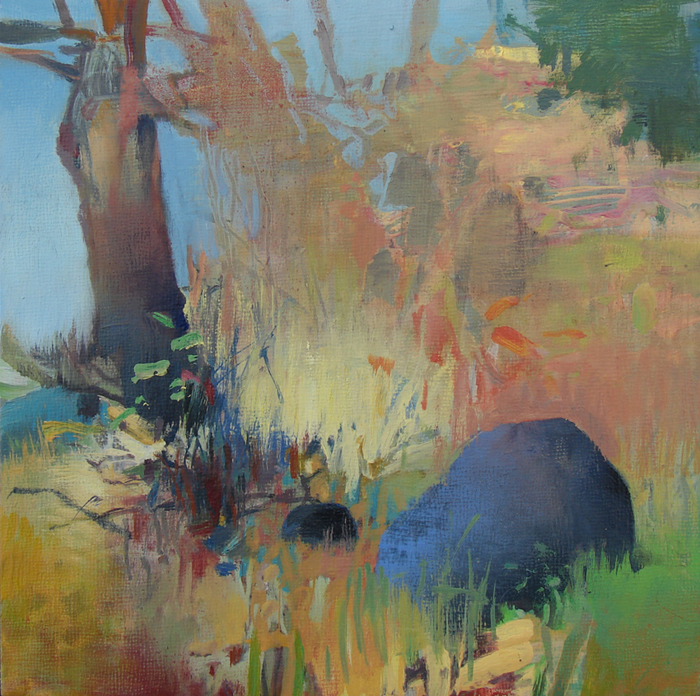 Edge of the Marsh oil on panel 8x8

updated work for sale in my studio [38 additions] 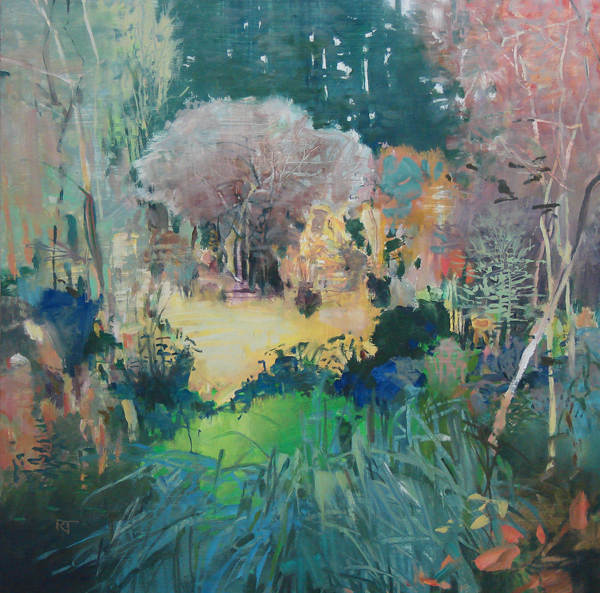 One of the best surprises we had in moving to Lake Oswego was discovering it`s undeveloped parks. The city was wise to leave several greenspaces alone, just a few trails. Bryant Woods is a small nature preserve near our home that we visit often. It`s especially beautiful in the fall, take a look. 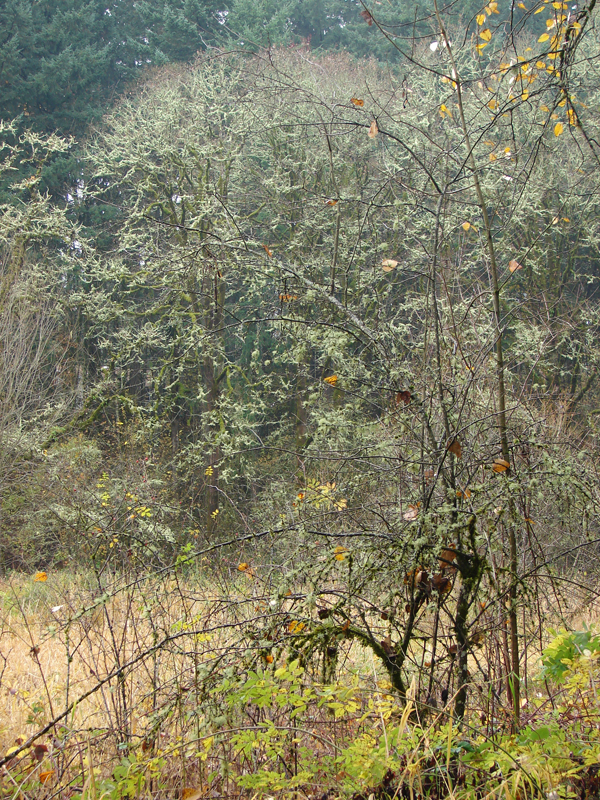 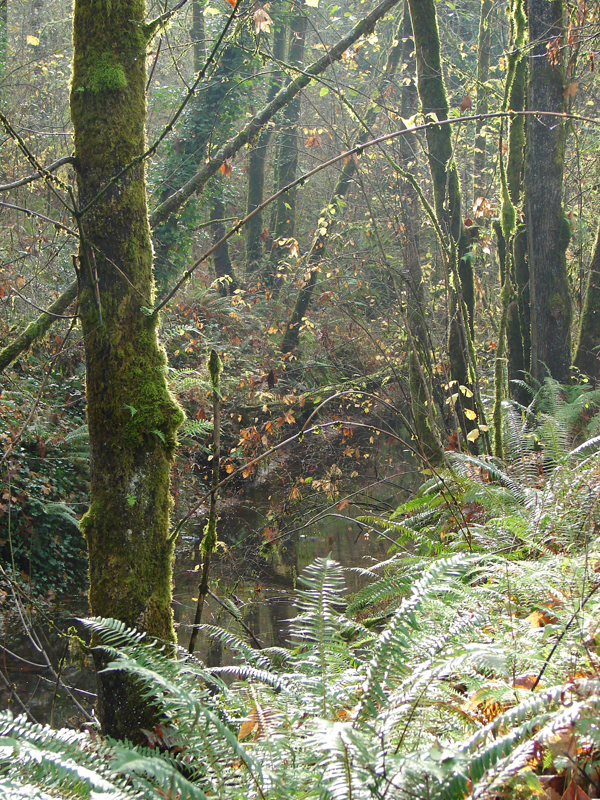 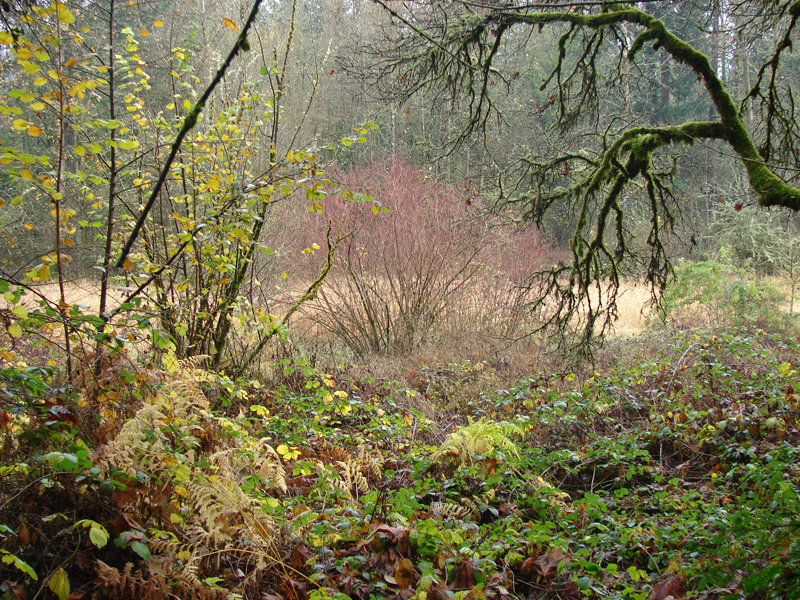 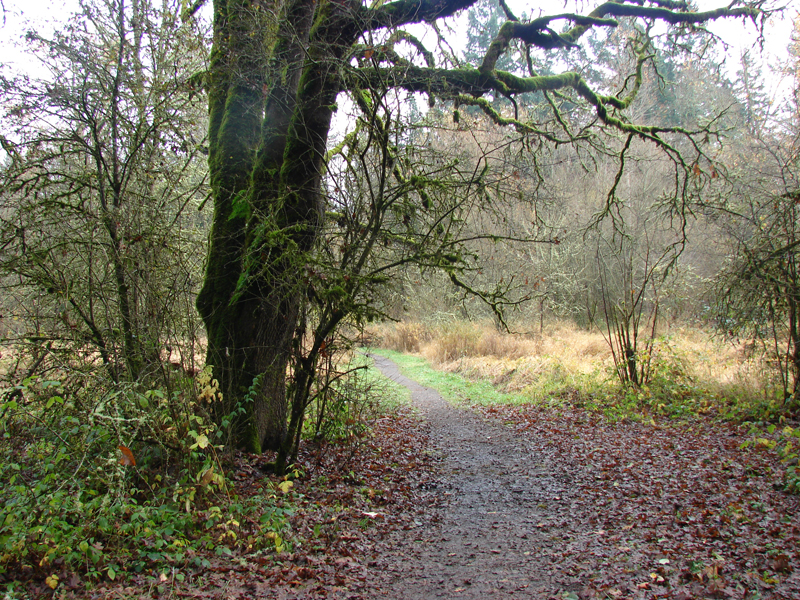 The heyday of blogging has been over for quite some time, everyone knows this. Yet some of us continue out of habit, vanity, community or increasingly for me, as a journal, a visual record of this time in my life.
The inspired painter from Montreal, Edith Dora Rey, was an early acquaintance and even mentor, teaching me a lot by example. She loves David Hockney like I do, like the whole world does and she posted a link to a great interview with him recently. He expounds at length about the importance of drawing and how to improve by working from life. In my humble opinion, Van Gogh and Hockney are unequaled in their inventiveness with line. Extraordinary painters of course, but it`s their drawings that surprise me. Hockney`s illustrations for the Brothers Grimm Fairy Tales are pure genius. He`s even done stunning works of art on his I-pad.

Check out Danny Gregory`s blog. He asks some provocative questions about the creative process.


work for sale in my studio
Posted by Randall David Tipton at 11:05 PM 4 comments:

Over the Sea 27 and others 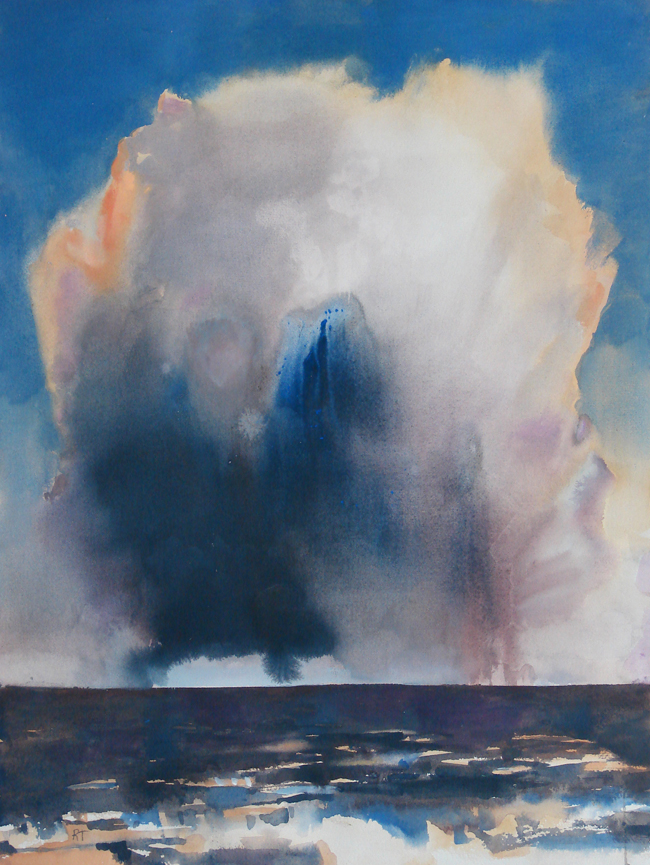 Like most of the others in this series, this began halfheartedly but became serious. This is a 'go to' theme when I need to paint but I`m too distracted to focus. Before I understood what a complete cliche they were, I used to paint pears for this reason. They have such a curvy voluptuous form and with a jaunty phallic stem, there`s something for everybody! Someday I`ll post a bunch of them.
Here are some earlier pieces from this series. As usual, the 'styles' range from realism to symbolism to abstraction. All are me, sometimes just days apart. All are about remembrance. 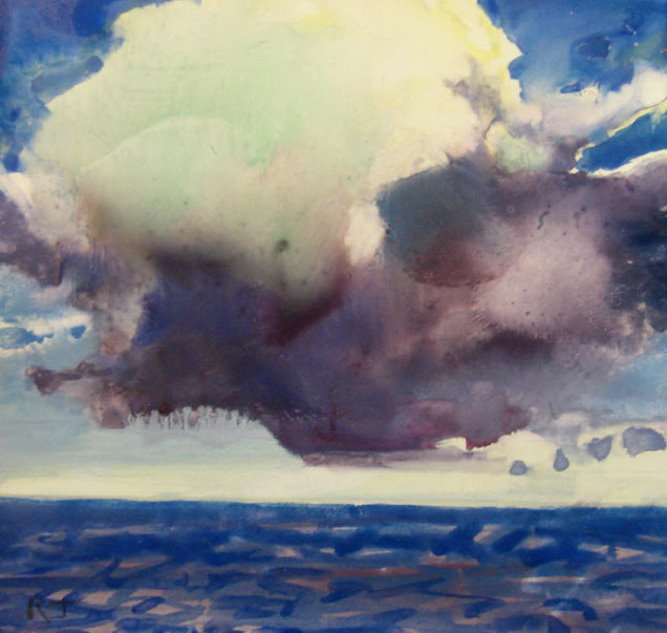 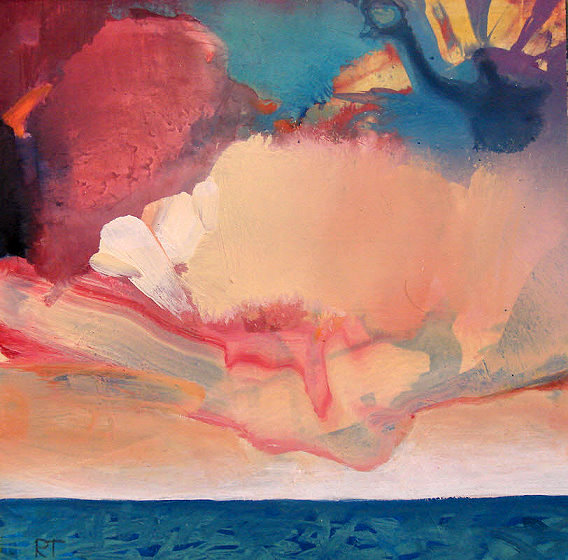 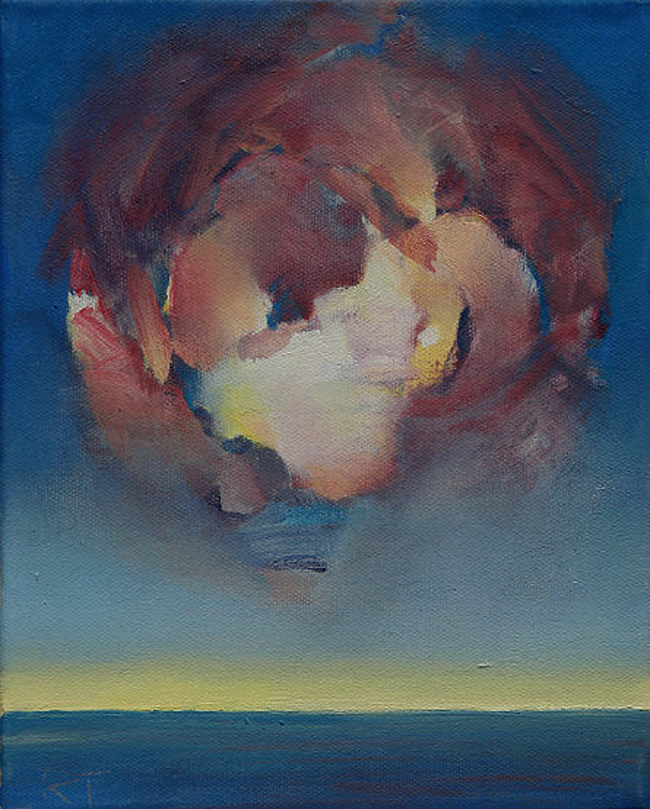 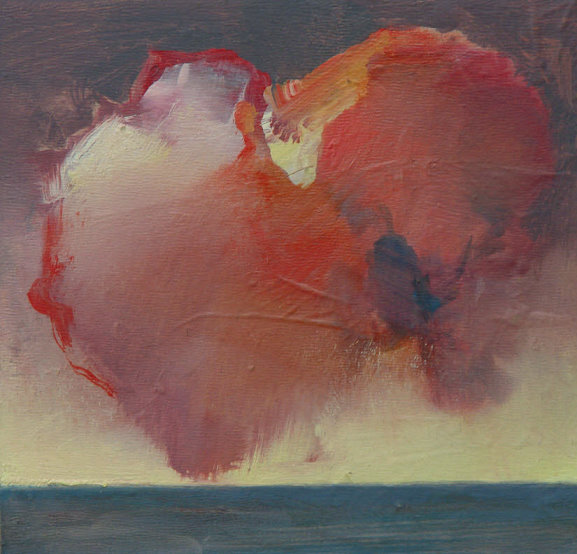 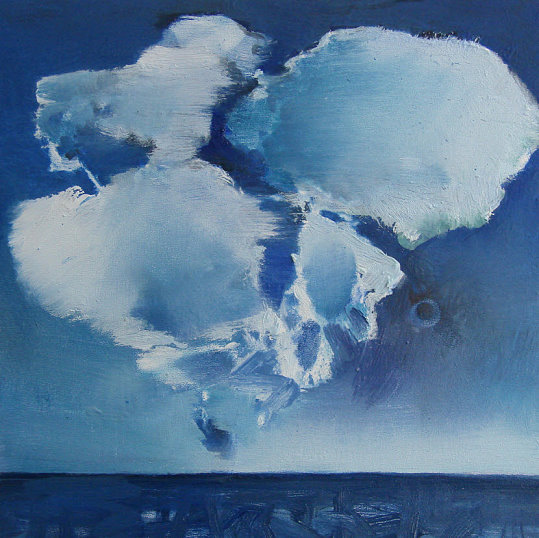 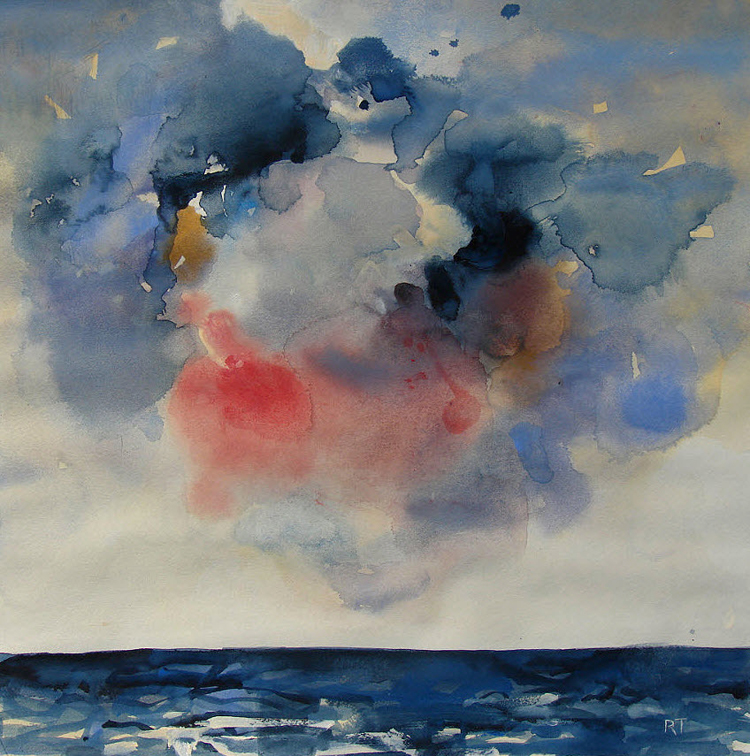 Larry Groff`s enlightening web site, Painting Perceptions, nearly closed down this week. It never occurred to me that it cost money to produce. Which is naive because it has a wealth of information about representational painters and painting. He`s a really bright guy and asks thoughtful questions when he interviews an artist. The archives are rich with insightful, wonderful profiles. So when he said he was shutting down because of a lack of funds, I quickly made a contribution through the Paypal button I had never paid attention to. Larry wrote to say he could continue for another year. If realism is your bent and especially if painting on location or from a model is your passion, this site is extremely rewarding. Somehow I started reading it early and saw it blossom. Larry`s own recent work has become luminous and haunting.

Got to love Pinterest! How else would I have heard of Peter Hicks? He looks like a merry grandfather and  his website assembled with a kit, but this man can paint! It seems in Britain there is a respected tradition of landscape painting that is missing here. And watercolor in particular is celebrated. Even Winston Churchill was an active, decent painter! Watch this trailer for a film about Peter which is still in process. I love seeing him tilt and maneuver his support. He will do anything to get it right.

The next open studio/demonstration is Sat. Dec. 13, 10am

Demo + the long life of a little drawing 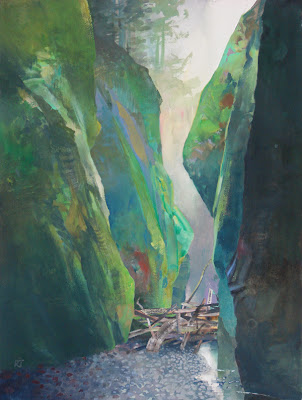 This mornings 'open studio'/demonstration was exactly what I wanted. Eight friendly people, good questions, stories, wit and networking. Painting is just too solitary! Unless one attends life drawing sessions, a critique group or some other social yet artistic gathering, it is just too isolating. I`ll continue doing this on the second Saturday of the month as long as it`s fun.
The painting began as an earnest watercolor but ended mostly in acrylic. Though I`ve painted this gorge many times, working on actual paper instead of yupo was an adjustment. 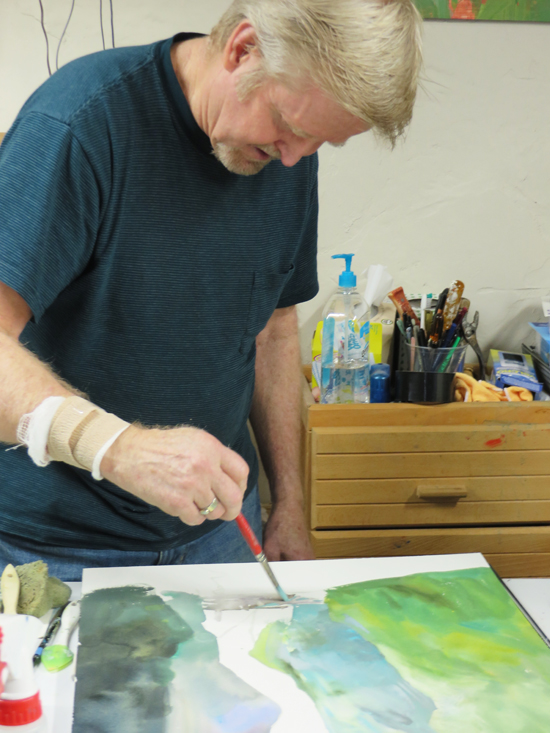 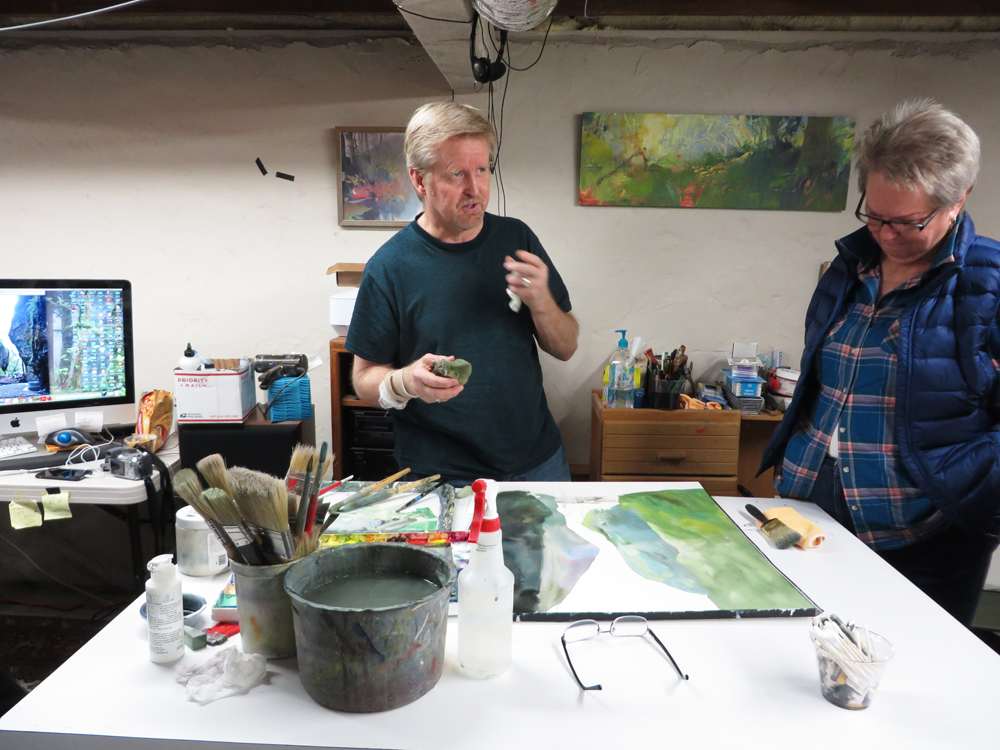 That is Carolyn Germane Conoy standing with me. Photos by the award winning Jo Reimer.

The remarkable Linda Robertson came by the other day to watch me paint and to coach me on Facebook, promoting and mailing lists. She had been a visitor during the Open Studio Tour, then wrote a post on her blog about our meeting which resulted in a sale.  Linda lost a close friend recently to brain cancer at an unacceptably young age. This woman`s sister in St. Louis saw Linda`s blog and her link to my website. One of my paintings reminded her of the hikes she did with her sister and she bought it. Sweet story.
Linda asked that I demonstrate on paper, so I obliged. She wanted to learn anything she might apply to her encaustic process. Because I think photography is way overused as a reference source, I like to work from drawings or memory if possible. I took out an old pocket sketchbook and worked from a sketch I did sitting on the edge of an overlook in Ecola State Park. That drawing had been the source for this painting; 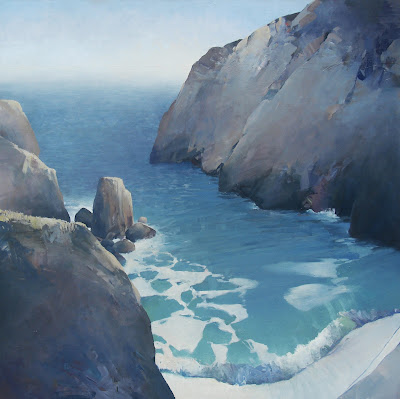 It was directly behind me in the studio but I only referred to the drawing [1995]; 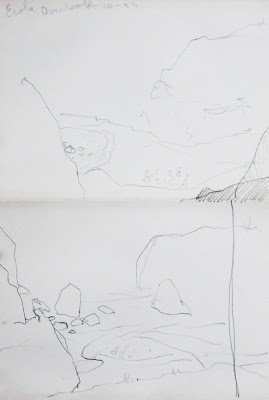 This is the watercolor I did with Linda; 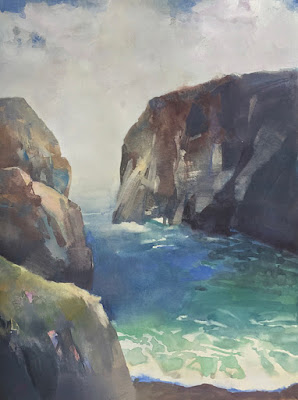 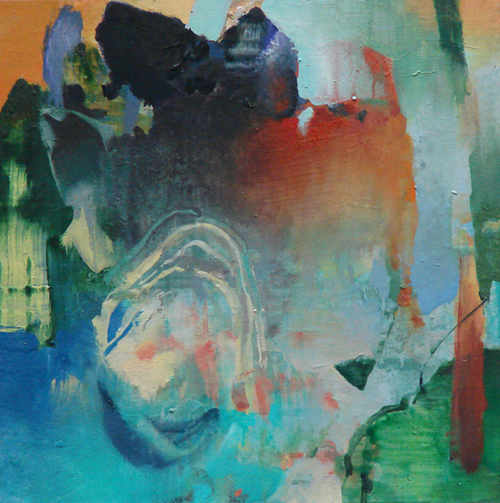 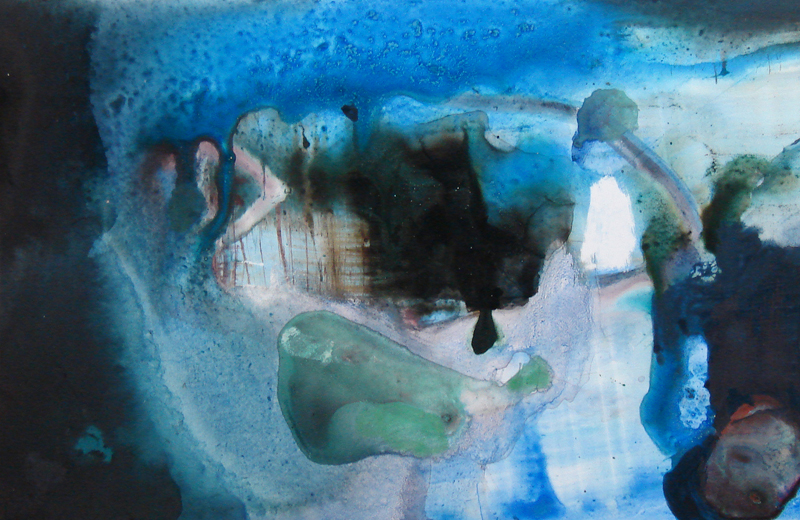 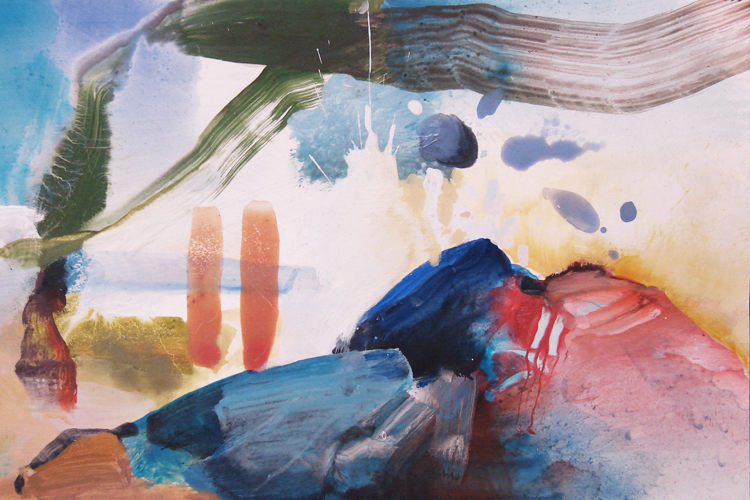 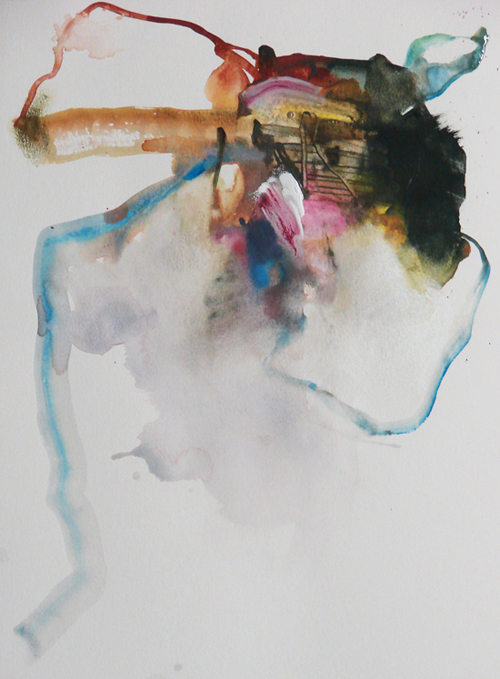 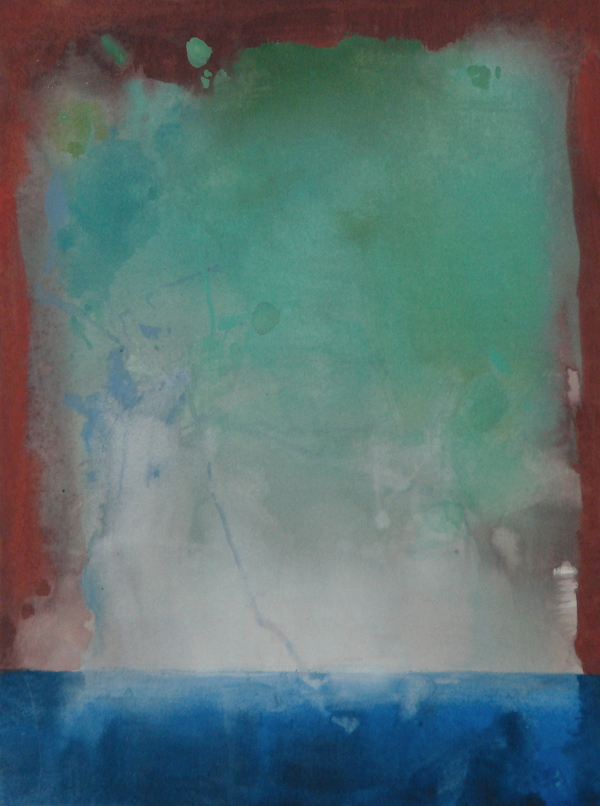 These are visual daydreams I make between projects or when I can`t face another tree.

In 2004, the day after the election, I awoke with true despair. How could George Bush be returned to office? The insanity was crushing. To pull myself together, I went for a run in the cold along the Springwater Corridor.  As I crossed the bridge over Johnson Creek, I looked down to see a young man in a tiny kayak paddling from bank to bank gathering up trash. He was deliberate and thorough. He was making his corner of the world better.
I don`t follow any religious tradition, I choose like Iris Dement 'to let the mystery be'. Yet I`m not an atheist either. The sight of that citizen cleaning up the creek was meant for me. To give me hope, and it did.

Speaking of spiritual matters, the Huffington Post ran an essay on Christian credibility recently that gave me insights and even gratitude for my own religious upbringing. It`s a good read with compelling ideas.

Now that the Supreme Court has decided money is speech, consider this; if individuals made contributions to the poor and disadvantaged rather than to political candidates, wouldn`t our voices be better heard? By someone who cares? Rather than purchasing a nanosecond of an offensive television commercial? The late David Kuo made this point after resigning as the director of President Bush`s Faith Based Initiative in disappointment. Makes sense to me and I became a supporter of the Oregon Food Bank. 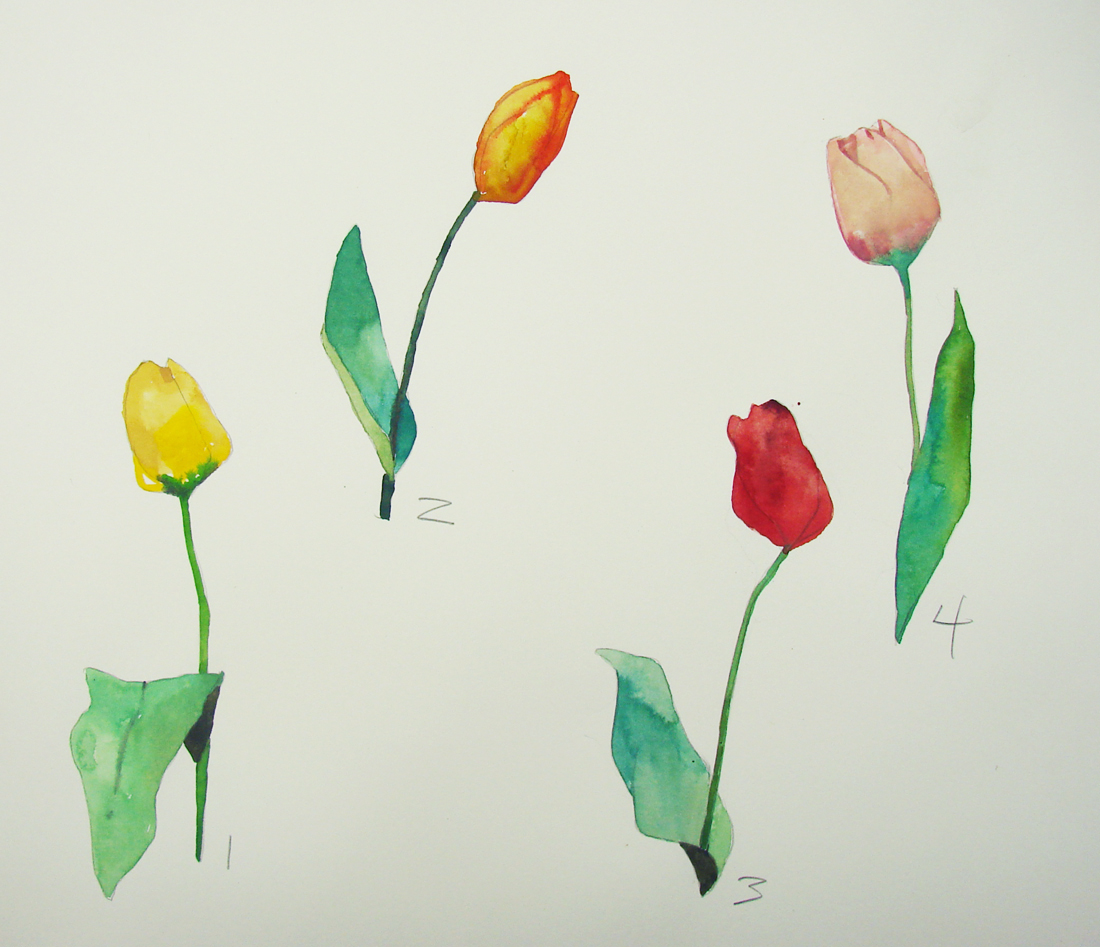 My beautiful niece Mackenzie asked me if I would design a tattoo for her of a tulip. She wants to wear my art on her forearm and I am honored. Years ago, for just a moment, I thought I should become a tattoo artist and cash in on the wave of interest which was clearly visible. Then I thought 'do you have a tattoo?' no 'do you want a tattoo?' no, OK then. Not my culture! However I`ve sure come to appreciate the good ones and the colors available now are delicious. She chose #4 with the leaf of #2 but on the right side of the stem. Done. She`s going to be looking at it a long time.

I had recently discovered the work of Lucie Bray, an intrepid plein air painter in England, when I learned of her death.  She had a fresh take on landscape painting that was both thoughtful and spontaneous. Take a look, her seascapes are especially spirited. She would pitch a tent on the beach and paint in all weather. Until the sea took her. Her life deserves to be remembered.

The first of what I hope to be monthly demonstrations, begins this Sat. at 10 am in my studio. If the conversation is stimulating and the experience fun, I will be doing this on the second Saturday of every month. Anyone is welcome!
5373 Lakeview Blvd
Lake Oswego OR 97035
parking in my big driveway or next door at the clinic

work for sale in my studio
Posted by Randall David Tipton at 9:40 PM 4 comments: