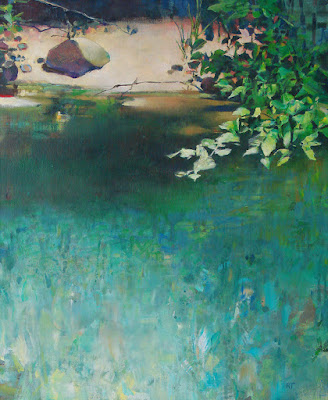 
When it`s hot out and the air is filled with smoke, it`s best to take cover. Avoid vistas and concentrate on the close at hand. This is when I particularly appreciate my basement studio, it`s always nice down here. In summer I like to paint water naturally enough. The edges of creeks, ponds and sloughs are always intriguing and are often suggestive of a healthier climate. So I go to the shadows for ideas and for comfort.


This is Tryon Creek. It slows in August but never dries up. The muddy/grassy smell of it is cheering on a walk in the heat. The way sunlight interacts with the murky water in dreamy milky colors is a subject I sometimes take on in summer. 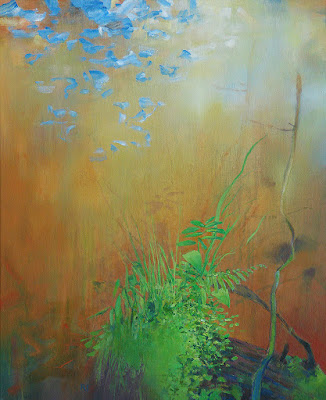 
I`m not sure yet if this one will live or die. Another I did several years ago was more convincing. I`m after an ambiguity between the water, plants and reflections. A confusion of elements that is accepted. 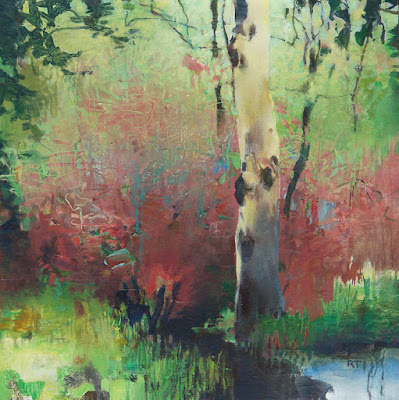 
A soggy landscape from last April, is now finished. The combination of red and green excites me every time. The pale versions are symbolic to me of the Northwest Spring. Nothing else looks so fresh. Here`s another from 2015: 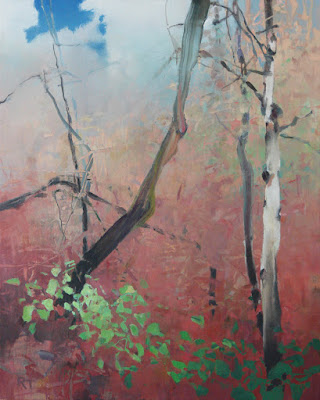 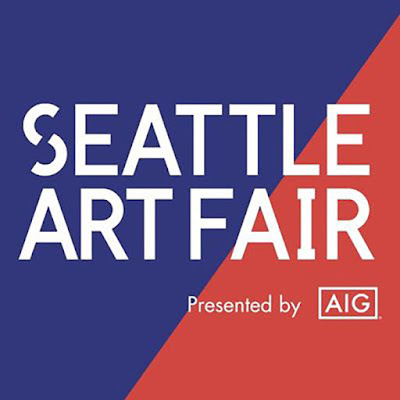 In a short email Marcia Burtt said 'by the way, your hero will have his work at the Seattle Art Fair. Are you going?'
I knew who she meant, Tom Uttech.
His work and intentions are so different from mine, but I greatly admire his mythical landscapes of the upper Great Lakes. They are so rich in emotion. Each one is like a patient lesson in how the world actually works. They stun you with beauty and keep your attention with a narrative that is complex and elusive. I had never seen one in person. 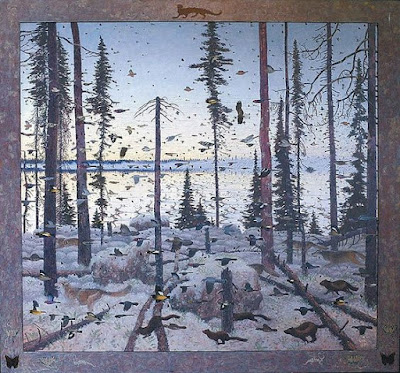 
But I`m an introvert, I don`t just go to Seattle! I had to consider; did my legs have the stamina yet? Was it affordable? Could I take the train? Should I go alone? Up and back in the same day?? And what about the residents and their strange Seattle ways? So I decided I would go IF it was easy. Got my reasonably priced Amtrak ticket instantly even with only four days notice. Bought the Fair admittance online. Decided what I`d eat for breakfast that morning and what I`d wear and tried to reimagine myself as an urbane man of the arts.
One thing I could count on, a spectacular ride along the Columbia River and Puget Sound. I used to do this often in the 90`s. I`ve never been able to figure it out; the train and Interstate 5 are parallel and often in view of each other the whole way yet the rail way could honestly be termed magical and the highway, sheer drudgery. Here are some cropped photos I took from the moving train as it slid through the Ridgefield Wildlife Refuge; 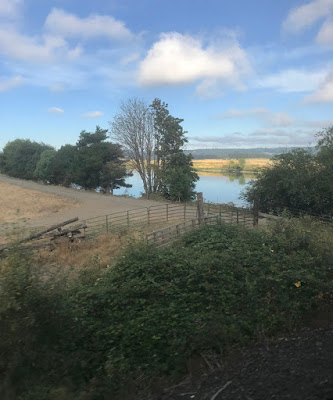 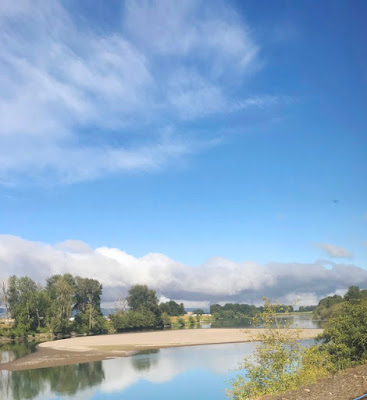 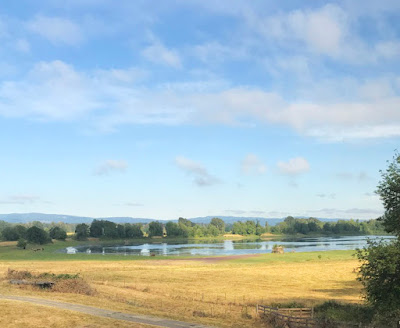 The venue was an easy walk from the station. Once through the doors, it was all I could do to keep my bearings. It was huge and filled with a super high caliber of work! Here are some of the paintings I knew would be there and others I was so happy to see. 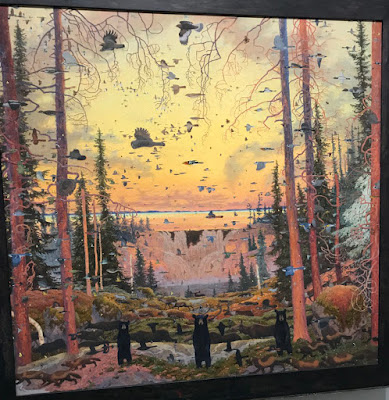 This is the Tom Uttech that launched this adventure. 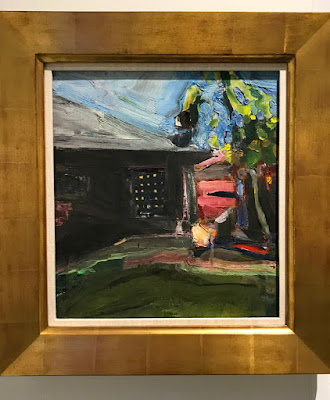 A Diebenkorn I have never seen reproduced. Looks like someone`s backyard. 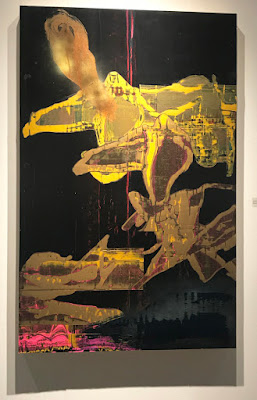 Karl Klingbiel. This guy is the best. My second reason for going to the fair. 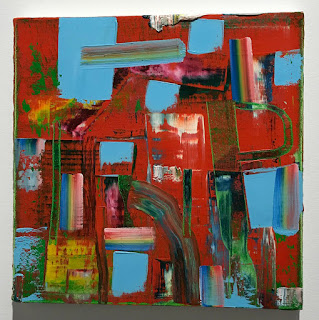 Tomory Dodge. I`ve admired him a long time. He`s had much critical success with this kind of work. I was really pleased to see him move on and grow into a new 'look'. 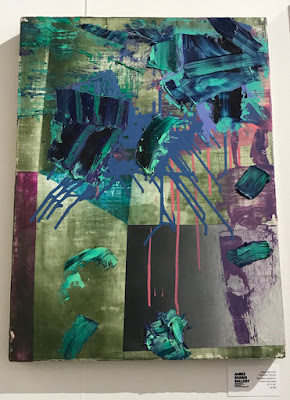 Alexander Kroll. I`ve written a bit about him. He was painting in a garage. I`ve done that too. 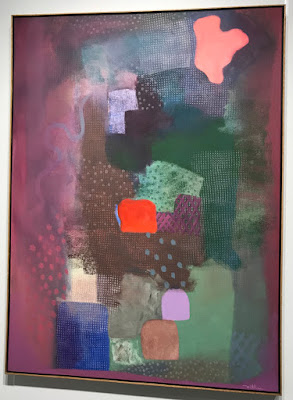 The late Robert Natkin. Oh my, this was my first encounter. You can hardly see anything in photos of his work. They`re deep. 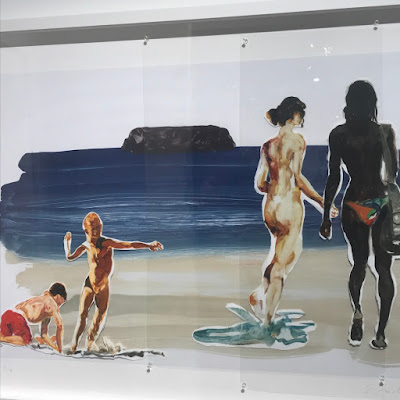 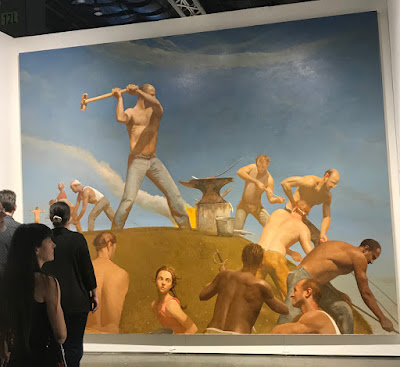 Bo Bartlett. This was the show stopper for me. It was immense and what are they doing? I didn`t crawl through the crowd to see the title.


I just noticed something. Every photo of a painting that I took was a painting from a male artist!?
Visitors to this blog may recall I`ve talked about and shown examples of many female artists. WTF?
My own latent misogyny or was there a lack of representation? Once again? Hmmm. 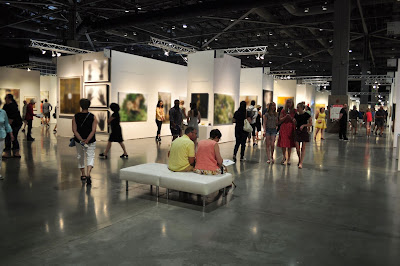 OK, you see what they are sitting on? THAT was the seating for this enormous event. A few of these, all right in the middle of the walkways. They may have well just thrown some pillows on the floor. At a minimum, they could have a least positioned these against a wall for some momentary back relief. But no. Believe me, I wailed about it in the visitor survey.
I was there about three hours. For most of it I knew what I was doing but then I became helplessly disoriented. Shortly after that, some inner Randall absolutely refused to look at anything else. It demanded we leave, so I did. I think I saw everything but I`m not at all sure. 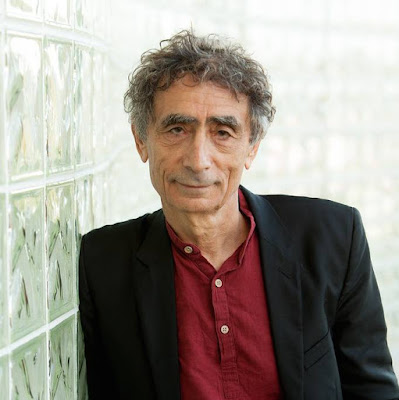 Somehow I came upon Gabor Mate, the Canadian family practice doctor. He has special interest and insights into childhood development and trauma. He is an expert on addictions, something I`m familiar with. His ideas are startling and then obvious.


“I’m not going to ask you what you were addicted to,” I often say to people, “not when, nor for how long. Only, whatever your addictive focus, what did it offer you? What did you like about it? What, in the short term, did it give you that you craved or liked so much?” And universally, the answers are: “It helped me escape emotional pain… helped me deal with stress… gave me peace of mind… a sense of connection with others… a sense of control.”
Such answers illuminate that the addiction is neither a choice nor a disease, but originates in a human being’s desperate attempt to solve a problem: the problem of emotional pain, of overwhelming stress, of lost connection, of loss of control, of a deep discomfort with the self. In short, it is a forlorn attempt to solve the problem of human pain. Hence my mantra: “The question is not why the addiction, but why the pain.”
Here is what he says about our president;

“What we perceive as the adult personality often reflects compensations a helpless child unwittingly adopted in order to survive. Such adaptations can become wired into the brain, persisting into adulthood. Underneath all psychiatric categories, Trump manifests childhood trauma…. Narcissistic obsession with the self then compensates for a lack of nurturing care. Grandiosity covers a deeply negative sense of self-worth. Bullying hides an unconscious conviction of weakness. Lying becomes a mode of survival in a harsh environment. Misogyny is a son’s outwardly projected revenge on a mother who was unable to protect him.” 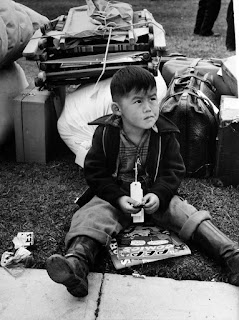 No wonder the refugee children are still separated from their parents. Adults who fled the violence in their countries on the chance they could give their kids some hope. They endured horrors we can`t imagine in the effort to get to the border.
Like livestock they were separated and spread across the country to detention centers. We`ve all seen the photos. The agencies were so reckless in their regard for these lives, DNA sampling is required to match them up again. Some never will.

The assault on decency advances every day. The Republican Party harbors and protects the basest of human instincts. If our country is to be a democracy, they must be expelled in the upcoming election.
For the first time I am making political contributions instead of only supporting our local food bank. Not because I trust it will be effective but because I have to do something. 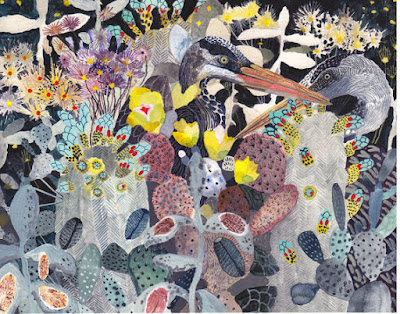 Night Garden with Herons by the wonderful Michelle Morin