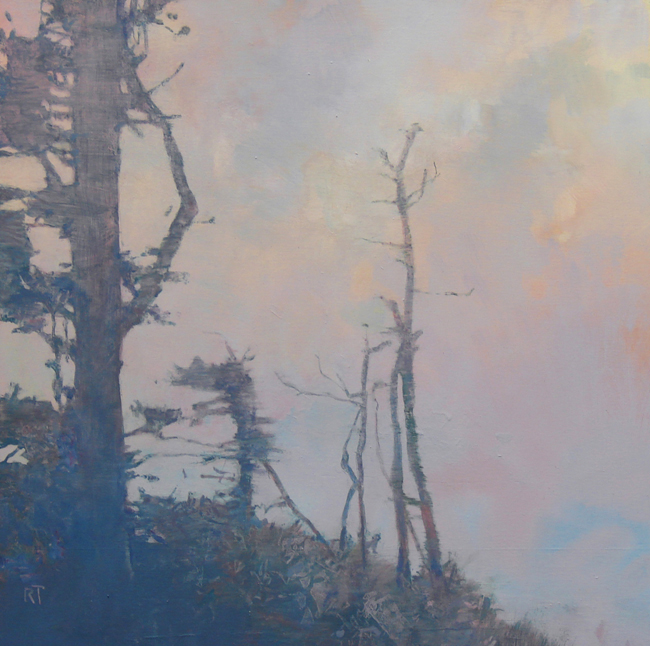 Doesn`t the Esperanto "Sunsubiro Nebulo", sound better than 'sunset fog'? I think so. What I`m trying to figure out is, is it subtle or flat out dull? I suspect this may be a question common to Tonalist painters. On the last night of my stay in Gleneden Beach a couple of weeks ago, the fog finally rolled in. The view of these stunted and dead trees looked starkly poignant 'framed' through the bathroom window. I thought, I think I have to paint those, so I took a photo after my shower. Now I`ve painted them but I`m not sure I accept this as final though there`s nothing more I want to do.


work for sale in my studio
Posted by Randall David Tipton at 7:27 PM 3 comments: 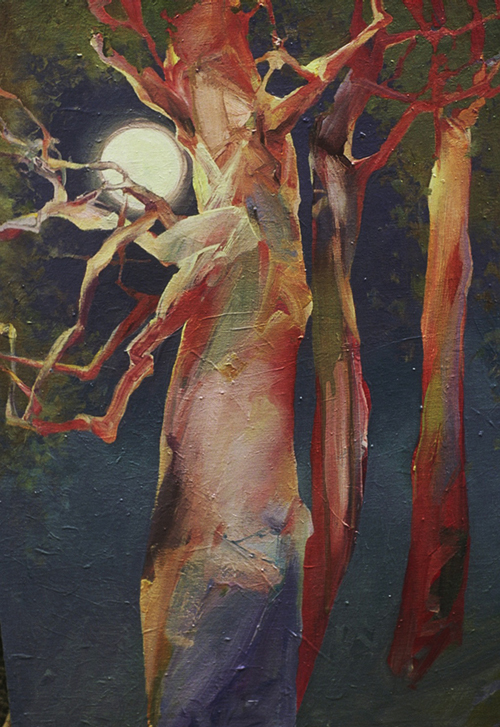 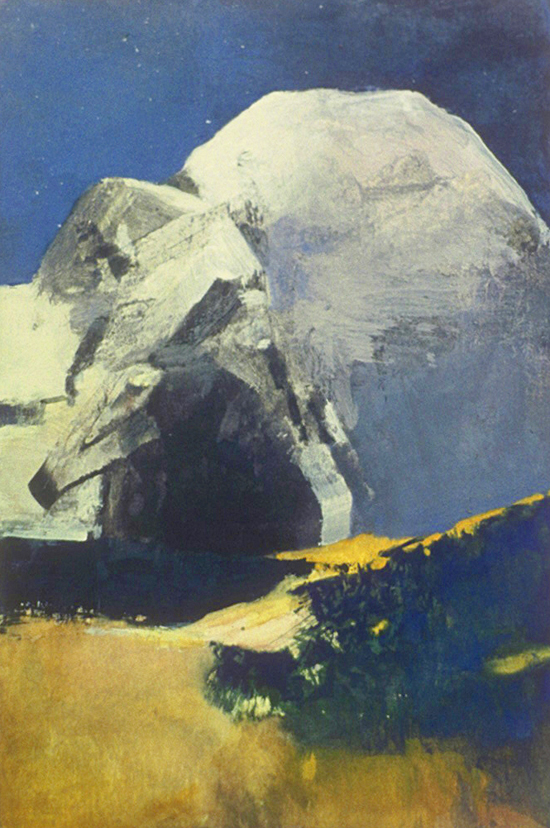 I traveled to Mt. Rainier last Thurs. in an odd mist. It`s July which is usually bone dry.
The national park is popular so I had made reservations months ago fully expecting a visible volcano in summer. Arriving in a cloud was beautiful but I was somewhat concerned we wouldn`t even see our destination.
The next day was crystalline clear and it was startling to awake on the high shoulder of the beast with the peak looming right above the hotel. Nice!
My favorite part though, was an old growth forest called "Grove of the Patriarchs". It was breathtaking as many of the trees were over a 1000 years old!  It`s humbling to stand next to a tree whose base would not fit in my living room.
We drove around the whole massive mountain, visited old friends from New Mexico and took a  delicious walk at the Nisqually Wildlife Refuge. The air was moving and the salt scent from the Sound with the warm sun produced a flood of memories of being roasted on the beach while being cooled by the sweet breezes coming off the water. 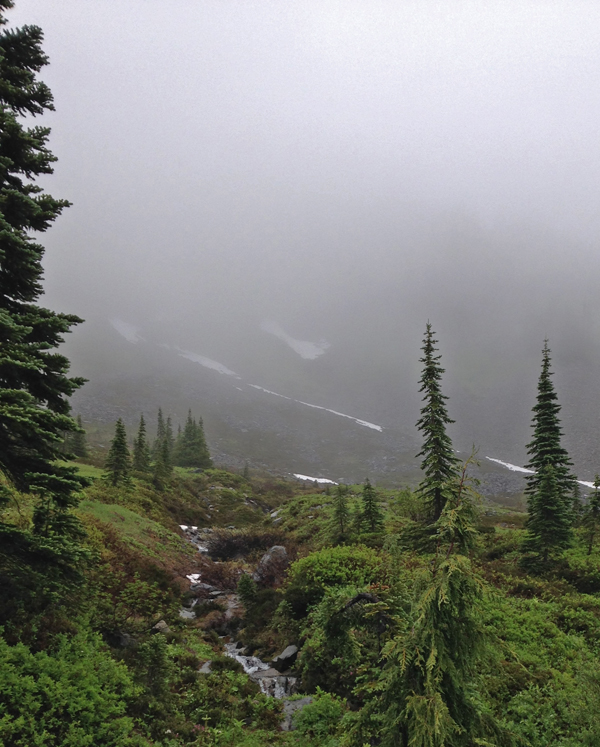 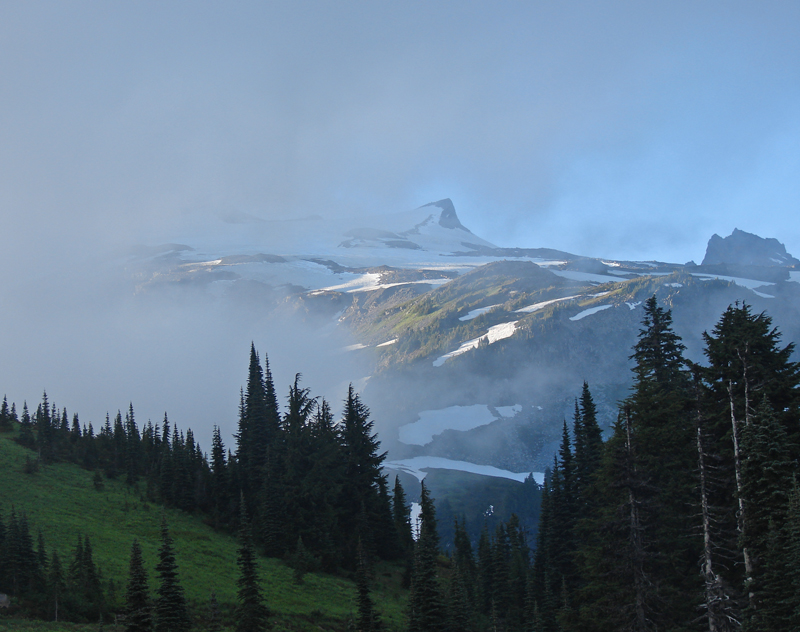 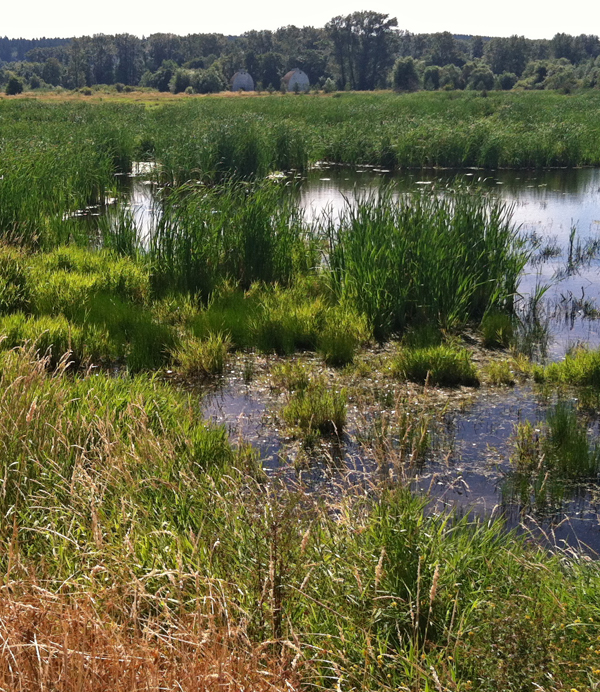 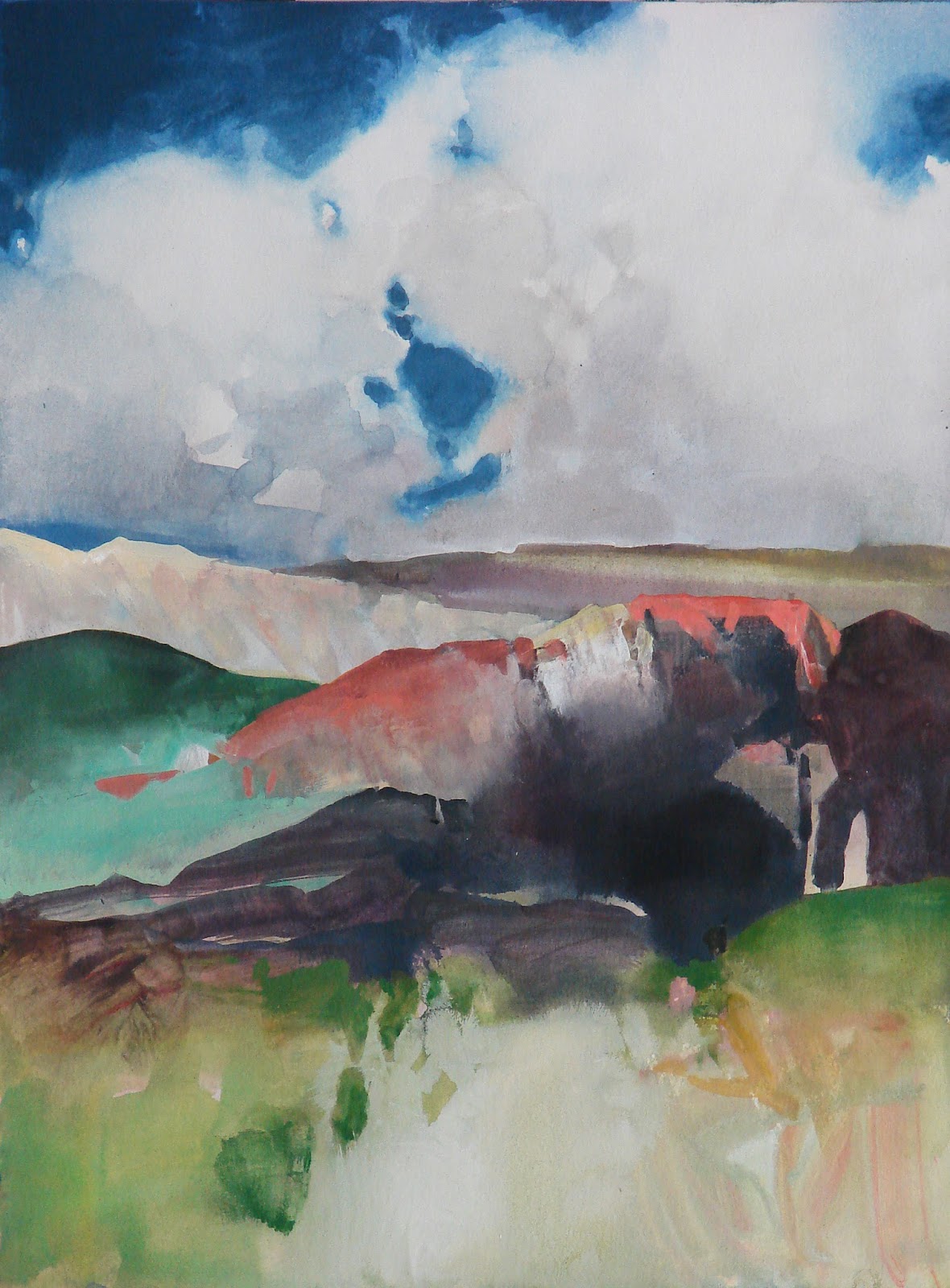 From Albuquerque to Home
watermedia on paper 16x12" 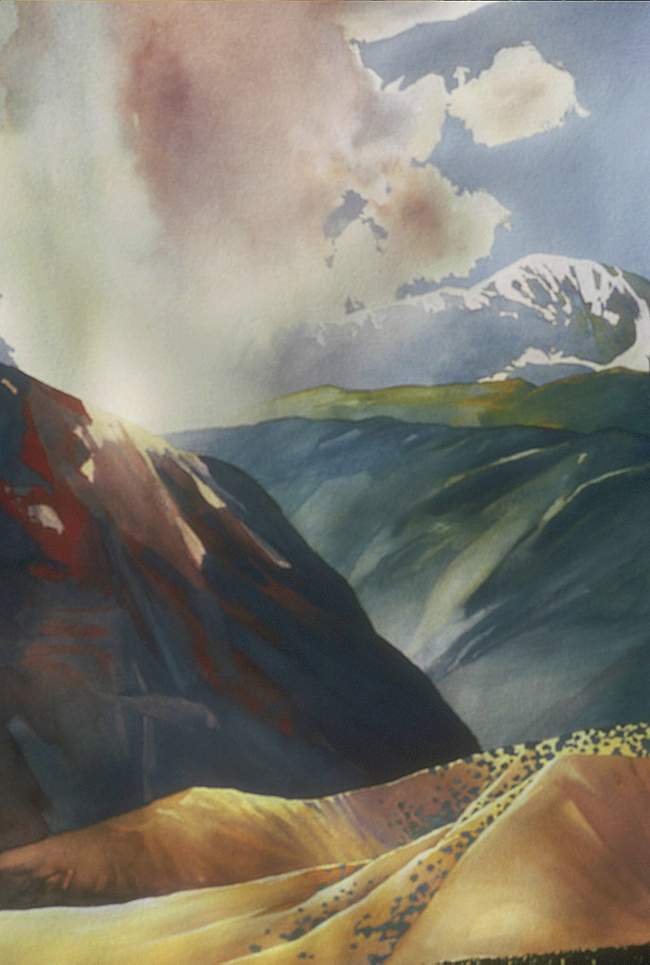 Memory becomes so interesting as I get older. Often it`s frustrating and completely unreliable but sometimes it`s like a long closed door is now open again. I was told this would happen. Be lucky enough to live a long life and you will revisit your youth again. I moved to New Mexico in 1976 at 22. Though I consider leaving it one of the best things I ever did, moving there was one of the bravest. I loved it immediately. Now after being in Oregon for 20 years, I`m having the sweetest small recollections of what it was like back then. Coming from Southern Calif., the clean air alone was exotic and exciting!
So with the top two paintings above, I was fooling around with some new papers and these NM landscapes emerged, full of emotional significance for me. The beauty of my new home state was stunning and even though I was really struggling economically, it felt in many ways like a rich existence. 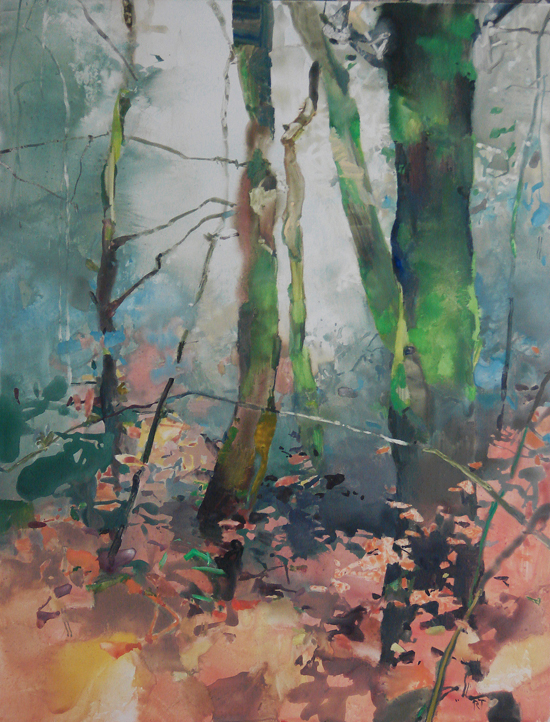 My first post from an I-Pad!
We're at the coast and it's beautiful, Oregon style. Which is quite different than the beach experiences of my young life in S. Calif. I couldn't stay out of the water as a kid. The contrast is why our neighboring state has many more millions of citizens than Oregon. Even on a perfect summer day, at this latitude, you don't really want to turn your back on the ocean. It's not your friend. So we fly kites, beachcomb, eat a lot of candy, shop, sit around fires, maybe wade a bit depending on your age, and love the sea very respectfully.
I'm crazy about my adopted state, but I'm grateful I grew up swimming in the ocean. A thousand miles south. I miss Laguna Beach a little on a sparkling day like today. 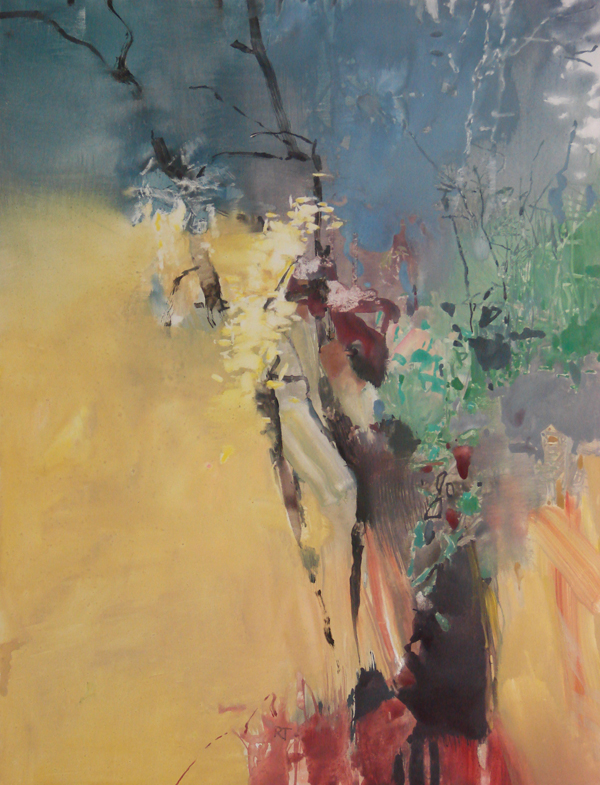 Last November I stumbled on a new watercolor technique for Yupo. I painted the whole sheet with a pale milky wash that contained a little color and a lot of white watercolor paint. I smoothed it out with a good house painter`s brush and then while it was still wet, I dropped saturated color into it. The brilliant white Yupo reflected plenty of light and kept everything looking transparent. I learned to use true watercolor brushes that held lots of paint, yet came to a point, to develop the shapes and add new layers on top of the earlier ones without disturbing them. I blended the edges which seemed too sharp. The advantage to this method is, because it is watercolor, it can be lifted and removed. I can draw into it with a wet Q-tip or brush and then blot off the wet paint. Whole areas can be wiped down to the bare white plastic to begin again.  I can soften areas by gently pressing a damp sponge onto the surface. There is a different kind of versatility than my usual technique of getting acrylics involved from the outset. If I have a difficulty later in the process they are always available for corrections. 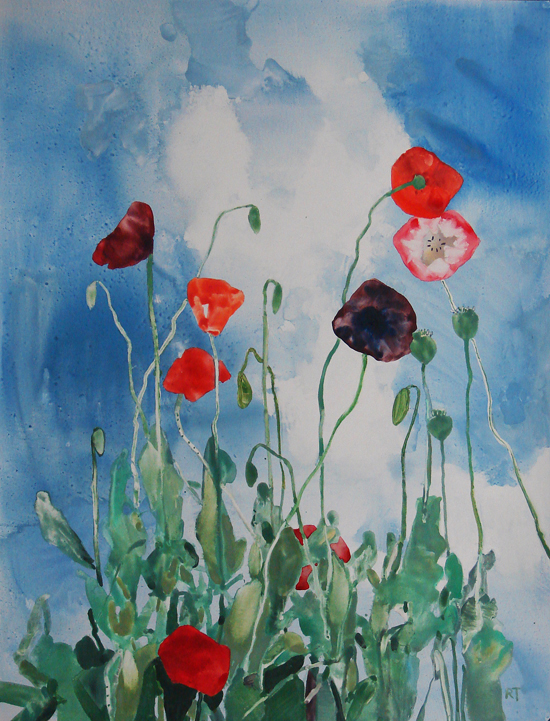 On the way to Cistus Nursery last month, my sister in law said "I wish you would paint some flowers". As luck would have it, there was a magnificent stand of poppies right by the parking lot. I drew them and took pictures. Here you go Norma, it looks like summer! It was deeply satisfying to paint those flowers, this landscape painter hungers for all things not green, especially red. 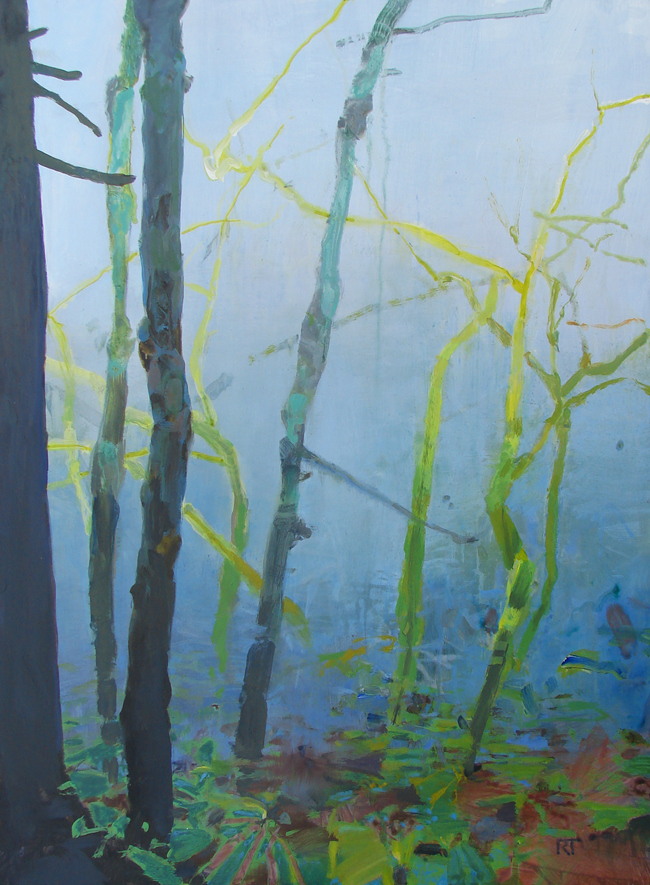 I`m practicing my watermedia techniques on Yupo [plastic paper] before I try to teach them later this month. They are sometimes so complicated I wonder why bother? Well it`s for the versatility, to be able to keep going until something good happens. When I demonstrated last spring, everyone wanted to know exactly why I was doing what I was doing. That actually surprised me because I thought it was obvious nothing had sparked yet. What I do is try many little experiments until I`m excited, even if temporarily. So as I`m painting these days I`m trying to verbalize in my mind all of my many decisions. Which is completely unnatural! A workshop participant has a rightful claim on any information the instructor has so I am trying to make the intuitive conscious and deliberate.

Posted by Randall David Tipton at 10:22 PM No comments:

The Cloud in the Water 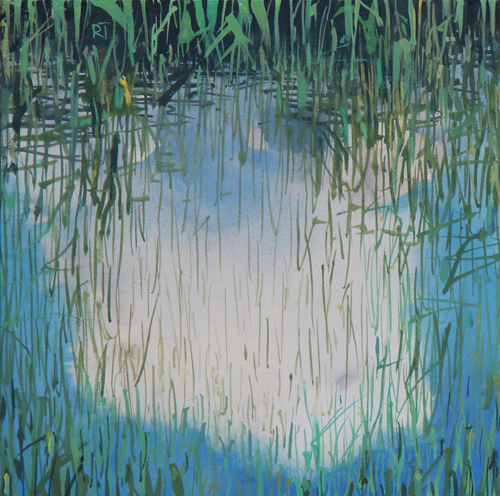 I can hardly hear the National Anthem without tearing up but that may have as much to do with the soaring melody and wildly visual lyrics as it does with patriotism. I love my country, we all do, but I`m happy for the 5th of July. This is also the title of the play by the late, great playwright, Lanford Wilson. Netflix has a PBS production that is wonderful.

P.S. umm.., I just rented it and watched it again, 37 years later. Nevermind, it was of its time.

Across the Meadow + Workshop on the Coast 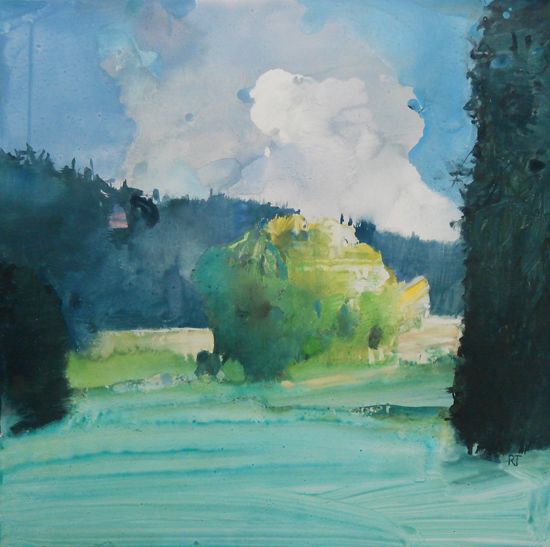 I was in Bryant Woods Nature Park the other day, looked across the meadow and saw this tree swaying in the wind. Last night I painted it. Though it looks nothing like the actual tree, the grass wasn`t a turquoise color and it was raining, this is what I arrived at. Quickly too. I was on the way toward painting the overcast, getting the meadow a true green and trying to make that tree move when I realized it was done. Any painter will agree, knowing when to stop is one of the most difficult aspects of our trade. Usually, I  understand my paintings were better 20 minutes before I actually put down the brushes. I try to keep pushing and lose a measure of grace. I suspect this is common. 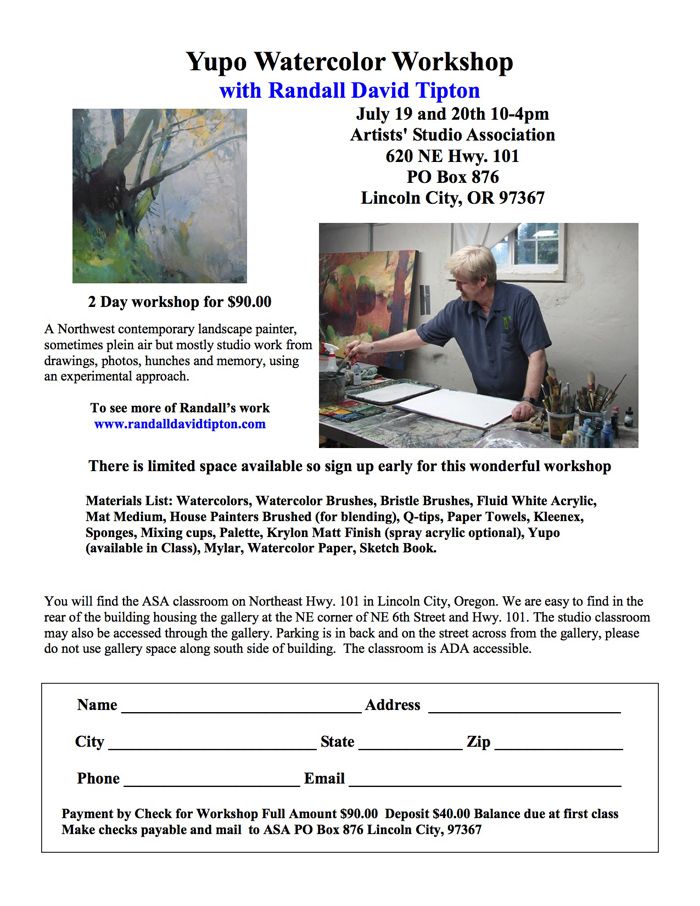 Soon I will be in Lincoln City on the central coast giving a two day workshop in Watermedia on Yupo, July 19 and 20. It`s not possible to register online but if you contact me, I`ll point you in the right direction.