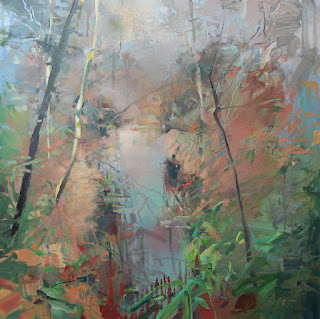 
I just want to say hello, I'm doing well with my partial new knees but I won't be painting for a while yet. Not until I can get down the steps into my studio.  Down is always tough with knee issues. The ideas are coming though just from looking out my windows. While I'm a lousy gardener, my neighbors aren't. I'm surrounded by trees and the recent skies look like Spring from my bed/command center/supply hub/communications headquarters/cat sanctuary/dining area.
Posted by Randall David Tipton at 3:22 PM 5 comments: 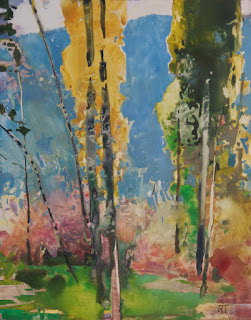 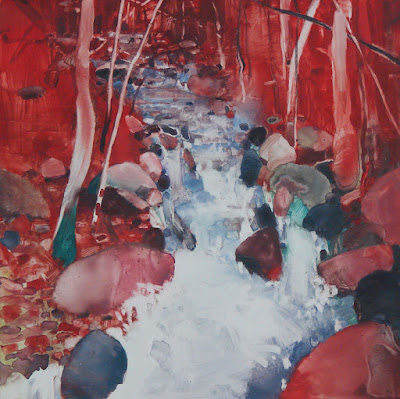 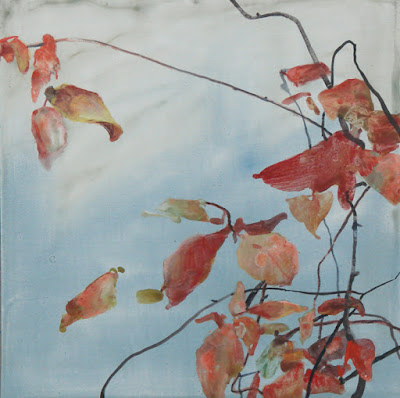 
I`ve hardly known what to do the last couple of days. The latest snow event coincides with my surgery preparations and the imminent inauguration of a man with no political experience and fresh allegations of collusion with the Russians.
Nothing proven but compiled by a respected British intelligence expert. Where are those fierce Republican cold warriors now? Not to be seen because their guy won. Even with the help of the Russians. How about some old fashion patriotism GOP?
This op-ed gave me some comfort. It suggests Democrats take up the tactics of the tea party. Hmmm, it could work!
This may seem contrary to my values but I did change my party affiliation from Democrat to Independent. It`s easy in Oregon if you`re a licensed driver. Just find  your county`s election office online and fill out the form. Now I only did this thinking my letters to public officials might be taken more seriously if my vote was seen as 'winnable'.

The snow started falling, trees started breaking and by 10 pm our power was gone. The automated estimated time of repair wasn`t too bad so we just went to sleep. In the morning John left for work and I stayed in bed to keep warm. It didn`t return until the middle of the next night! I have a tiny bit deeper understanding of homelessness now. Cold will find you. Once you finally get warm, any movement disrupts that comfort radically. It is humiliating.
Imagine if that was your daily existence?
The zeitgeist in my home this week has been agitated to be sure. By the fate of my knees of course, icy weather and horror about the possible future of our country. Noam Chomsky says today`s Republican Party is the most dangerous institution in human history. He may be right. The R. Party left democracy in North Carolina on par with that of Cuba.
So no titles on the paintings above yet. Soon I`ll have a whole lot of time on my hands and I will think of them then. What to do during the long recovery concerns me as much as pain. I suspect I`ll finally see some of the TV series I`ve heard people talk about for years. 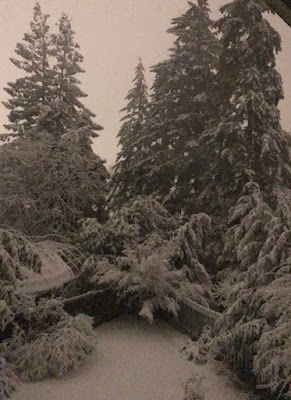 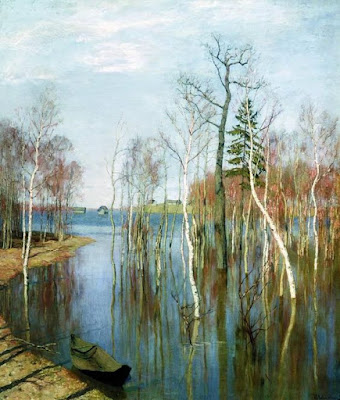 
For me, Isaac Levitan is the father of the kind of landscape painting I aspire to; Work that comes from an emotional reaction to nature. In his brief 40 years he created a visceral, ground level view of his Russian countryside. Over a hundred years later, his moody landscapes are a touchstone for me and legions of other painters. 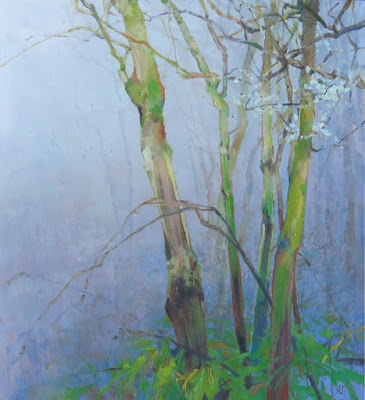 
My last painting of 2016.
I went for a walk the other day on Cook`s Butte and found the hill enclosed by fog. Then it started to burn off creating a transcendent moment of beauty; 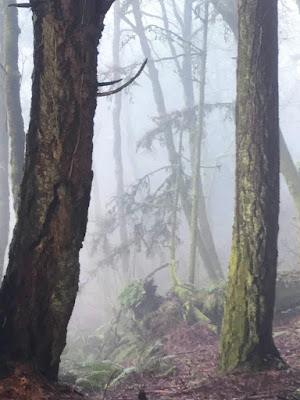 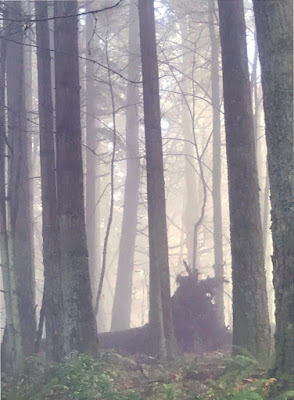 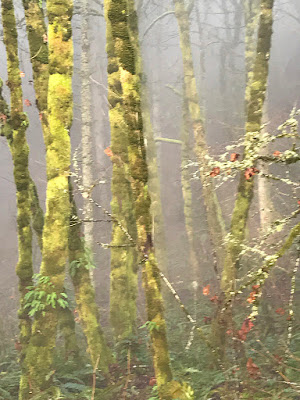 I`ve seen so many beautiful sights up there! It`s usually my exercise destination because I can get an uphill work out which is good for my heart. A couple of years ago I was running  through those forests. Not now! I`m scheduled for partial knee replacement surgery in two weeks. My surgeon said I could do both  but I`ve been advised by others not too. When the pain of recovery was graphically described to me by another doctor, I thought I can`t do this at all! I`m not miserable! But the truth is my joints have aged really quickly and I will need this sooner or later. I`m groping for a better attitude. 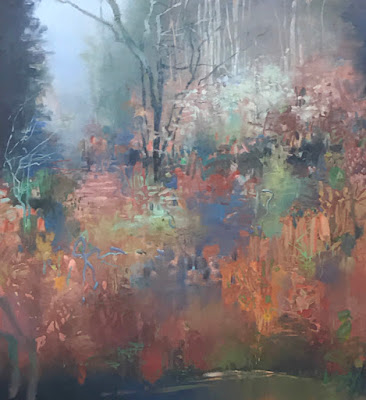 
Many many hours invested in this! At Christmas, its festive quality made me think it might someday be good. Then I got completely sick of it and it now is buried underneath 'December Forest 2016'. I hate that feeling of defeat!
So what did I learn? Orange and 'rust' are difficult together! 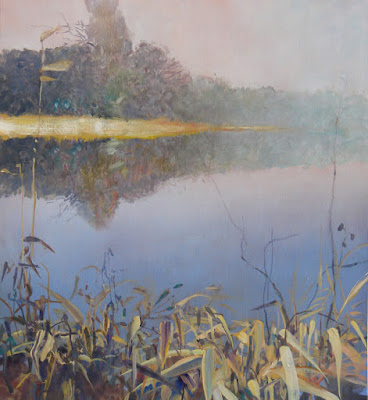 
In November I received 10 beautiful cradled panels made for me by Matt at Art Substrates. I`ve painted six of them now and may order some more. Their only downside is the weight. If you paint, try a prepared wooden panel if you haven`t. To me it seems more responsive than canvas. Transparent passages are especially fun with the layering of color.


A few months ago I realized I was eligible for Social Security. When I checked the difference between collecting now or in three years, it wasn`t that much. I do a lot of running around in the service of my vocation, it isn`t easy to sell paintings. I thought, why not push a little less?
Yes!, sign me up!
And it`s fantastic! The money just appears in my bank account! The bad news is I may make too much to collect at my age. In fact I may have to pay some back, I`ll know when I do my taxes. Meanwhile I`ve bought some art! 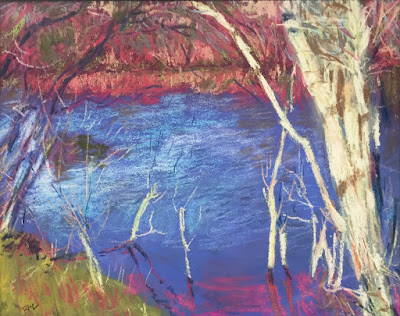 
I love Robert`s work! Several years ago he worked mostly in pastel and they were electric. This one I`ve wanted for years. Check out his Etsy shop, there are dozens just as good.


He`s coming and there is no stopping it. The national seppuku is about to commence.
Should he have a good idea, I will support it.
The man himself deserves no support. You do not lie about an entire culture and say you saw thousands of Muslims celebrating in New Jersey on 9/11/2001. No one saw that because it didn`t happen. You don`t hound the president sowing doubt about his very citizenship just because of his race. To undermine him regardless of how it hurts the country. These are violations of the under appreciated 9th commandment 'Do not bear false witness against your neighbor'. The president-elect does this reflexively. That is evil.
The Republican Party is poised to exploit the average American on a scale we`ve never seen. God help us.
Mental health experts agree that when a society suffers an upheaval, there is great purpose and meaning to be had in helping others. What I want for myself is a way to resist and be heard, to protect the rights of all of us and not be utterly depressed for four years. We will see.


What we need is a cosmic caballero! 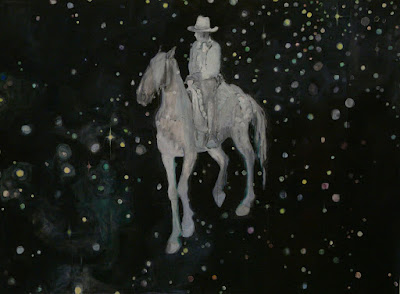 work for sale in my sudio