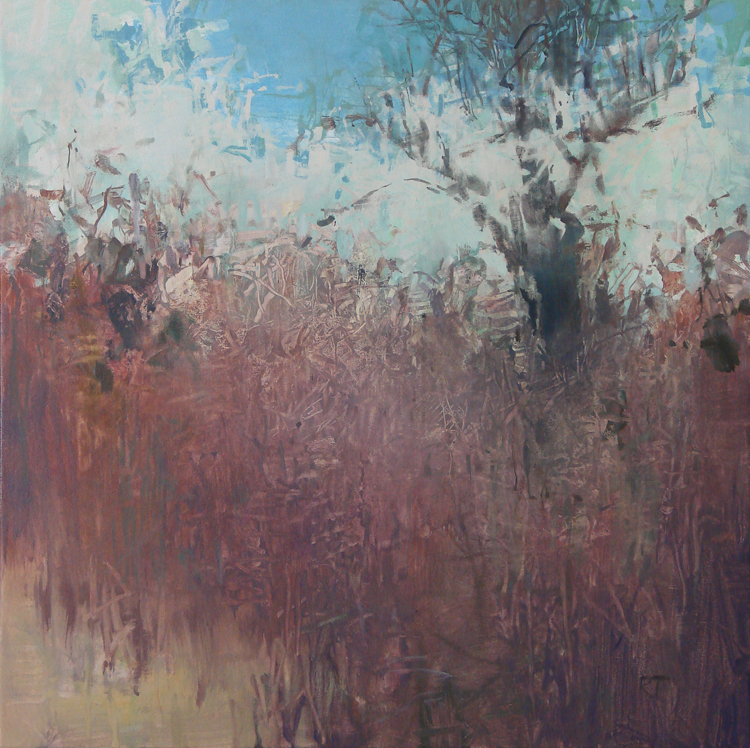 I`m having trouble moving on from winter, I always do. So I`ll paint it all through the warm months ahead. The big meadow in Bryant Woods is flanked by two wetlands that bristle with bare branch intensity. There is always something interesting to paint in winter. 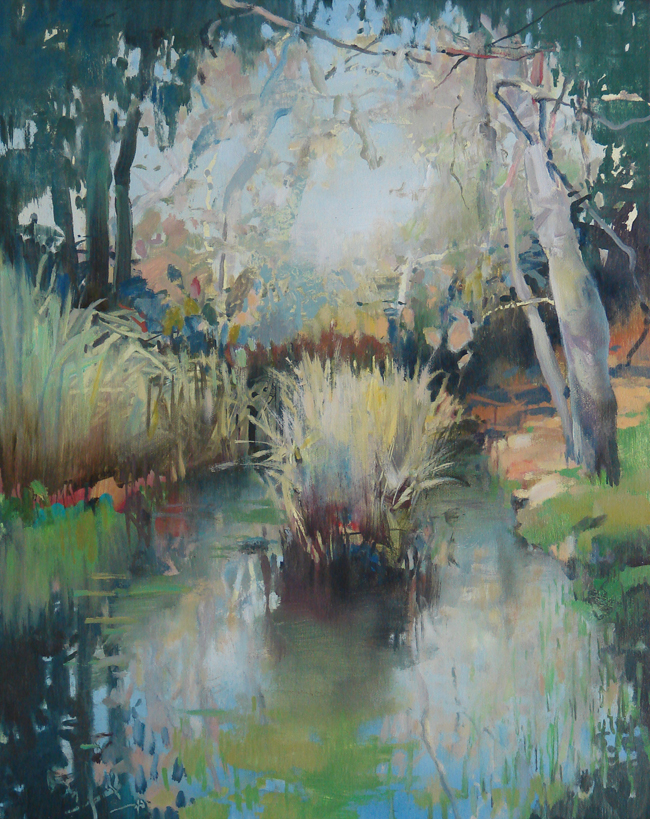 This was painted soon after my return from California last February. The monarch butterflies roost in this Eucalyptus Grove less than a mile away from the sea. This is one of the destinations of their long annual migration. If that weren`t enough, calm  beautiful sloughs of brackish water meander through the trees and nearby dunes a stones throw away from an RV park and a campground. The sublime and the utilitarian side by side. California style. 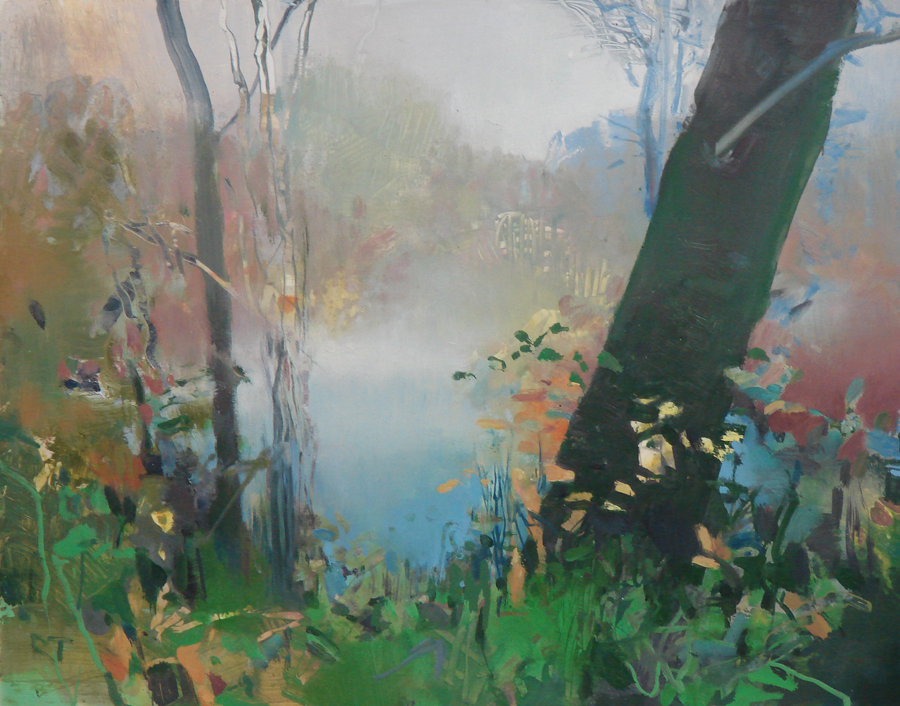 Another wetland this time in early fall. I painted this over a failed watercolor and felt avenged.

A quiet spot above Oswego Creek in early Spring.


My buddy Jo Reimer has a show opening May 16 at the beautiful Hillsboro Public Library. It will be up all of May and June.
Years ago we met through email when she wrote to ask for advice on what to see on her trip to northern New Mexico. A couple of years later she wanted to 'study' with me and I said come over and let`s talk first. She arrived with a pie, I`ve loved her ever since.
She taught home economics once upon a time and has a deep understanding of all the domestic arts. After teaching she focused on textiles especially quilting and embroidery. She is a cunning shopper and began a business of escorting bargain hunters to East Asia. From that experience she began a new business of designing clothes for travelers. She can cook up a feast, her garden is gorgeous, she co-designed her house, she can make a dress in about five minutes and she`s generous with all that she knows. Once women like her were common, they had to be. Now in a world of specialists, mechanization and out sourcing, a single individual with so much talent, ability and knowledge is rare.
She also made these visually rich collages which are among the works at the Library; 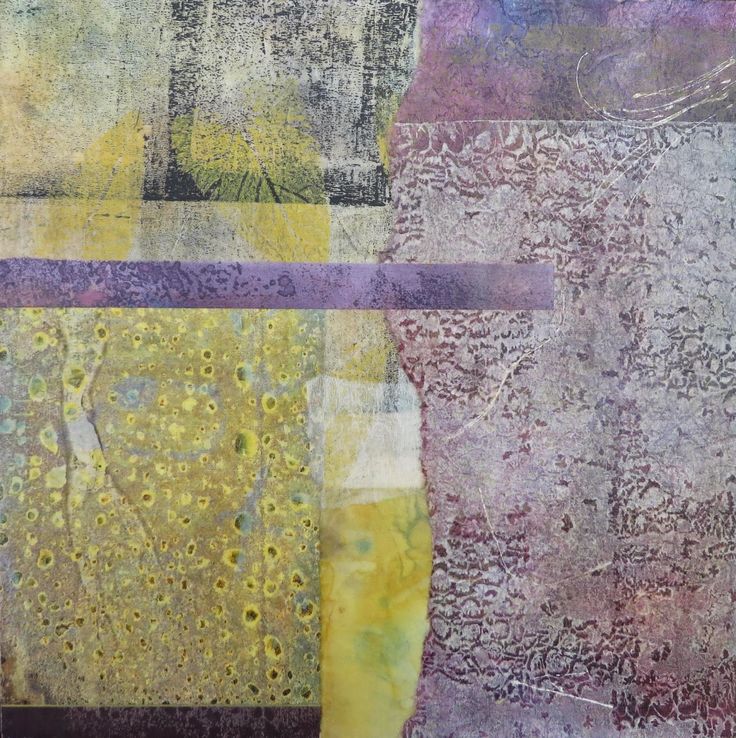 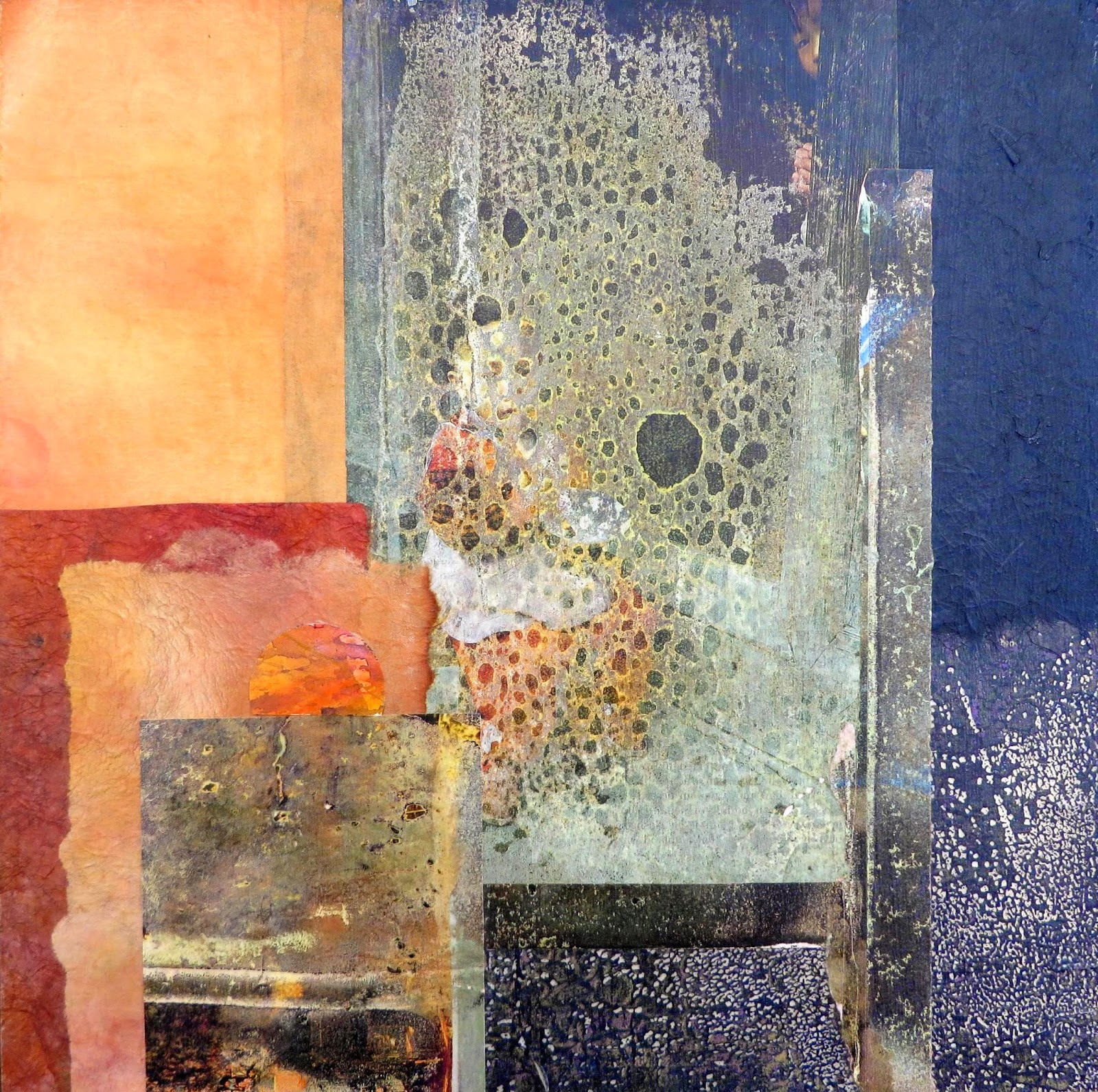 If you`re off to the coast, make a brief detour in Hillsboro and see what she can do! 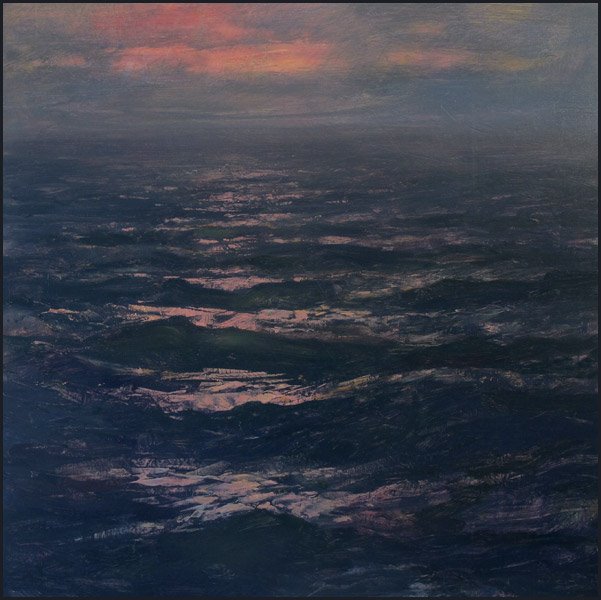 This is a masterpiece!
A good seascape bears a complex emotional 'message'. We are reminded we are integral to something far larger and more marvelous than ourselves but also how we exist here for such a brief moment. 'Make the most of it, you will not pass this way again'. This painting aches.

All of the sudden she collapses, is rushed to the hospital, then silence... Hey, what happened to Joni Mitchell? Then we are told she`s in a coma and a friend has been given power of attorney. An hour later, it`s no, she`s alert and expected to recover! BUT she won`t be well enough to appear in court for three to four months! Why does she have to go court anyway? Poor Joni. Has anyone ever been able to articulate elation and disillusion like her? Every sensitive soul of my generation venerates her. Justly. Listen; 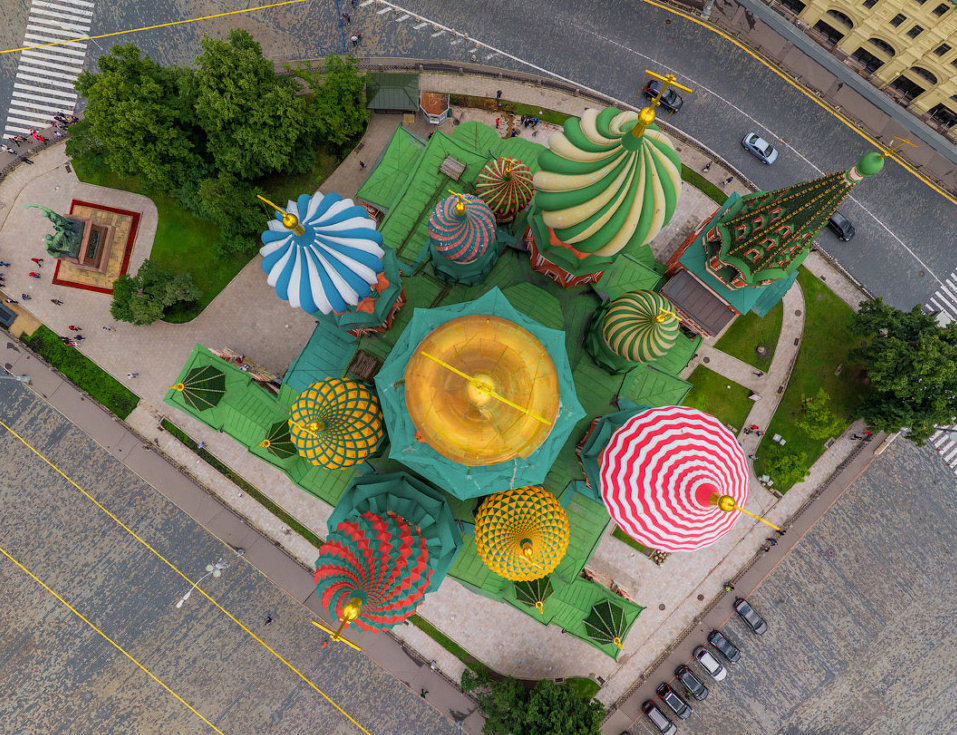 Guess?
Just the coolest building in the whole world! I have been obsessed with this place since I was a boy. And it was begun in 1555! St. Basil`s Cathedral in Moscow might be the only reason I would visit Russia right now. The government`s new persecution of gay and transgendered people is inexcusable and must not be allowed to continue without protest from the rest of civilization. Wasn`t this a new liberal democracy just a while ago? Unbelievable! 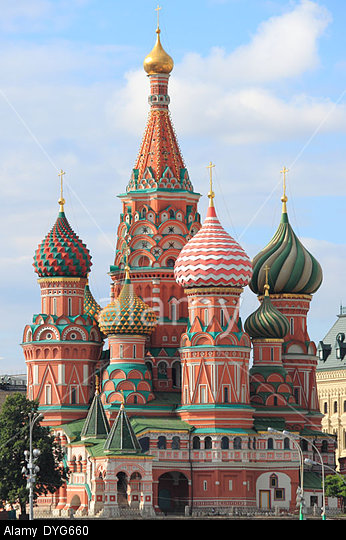 Could you imagine this man as president?; 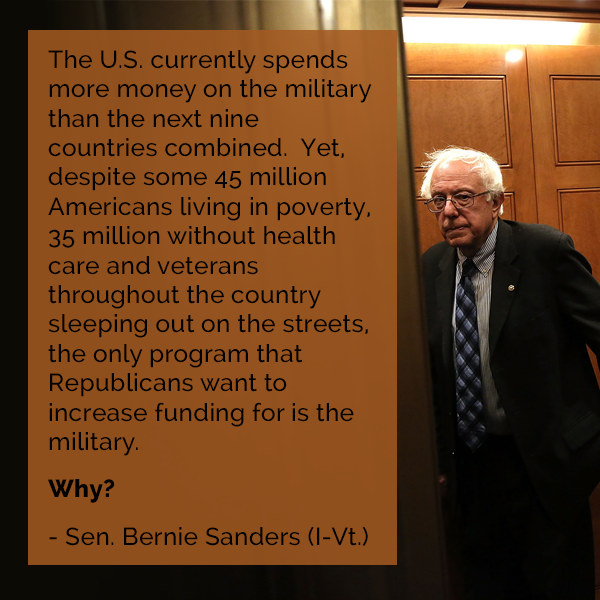 I could. A little 'socialism' is exactly what our country needs right now.

You have been exceedingly busy and successful with all of these paintings. I do hope you don't abandon watermedia but your oils have the same look and looseness and color so I'll be okay with it! ha ha I was never a huge fan of Joni but reading about her, I, too, was surprised and concerned at what was going on...someone trying to take away her power because she is ill?
And I like Bernie's stance...perhaps a little socialism IS what we need to get us back on keel? It will be an interesting show this time, I'm sure. This reminds me of my dream last night: I and my cousin were talking to President Obama and First Lady Michelle about the healthcare situation in the US and asking what happened to the HOPE...yes, I do have some strange and very complicated dreams!

Love the collages. Quite a wow-piece by Don Gray.

You do have a collection of talented friends! Jo's work is new to me but the collages look like something I would like-imagine a whole show! And I am familiar with Don's work and like it too. He has a good mix of realism and "thinking-while-painting" work.

That building! Hard to imagine something like that in Russia. I tend to think drab, dreary and desolate.

Maybe in time our politics will take a gradual swing. So many doing without and left out.

Not a summer guy? Not so crazy about the heat either but look where I live! Starting a 6 month stint of 85-105 degrees:)