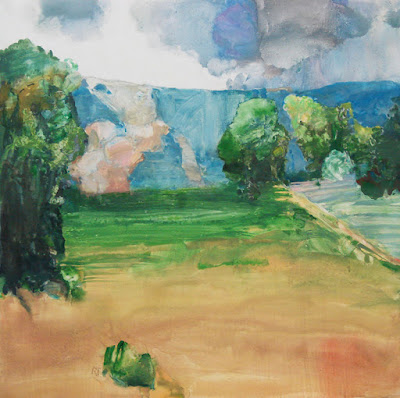 
I`ve been to East, I`ve been to the West.
John and I finally made our trip to the Painted Hills, a unit of the John Day Fossil Beds National Monument. I have wanted to see this marvel for many of the 25 years I`ve been here. Maybe having come from New Mexico, I had had enough of an arid geology. I was more than ready now and they were worth waiting for. Eastern Oregon is remote, expansive, extremely beautiful and mostly unsung. We stayed at the Painted Hills Vacation Rentals which was an Oasis hanging on the side of a canyon above the town of Mitchell. 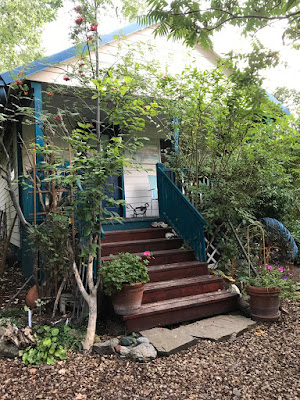 There are three cottages one of them quite large. They hosted 42 astronomers during the total eclipse of the sun last month and it was quite a party. The complex itself is a work of art. Bright cheerful colors everywhere in the jungle of trees and flowers. 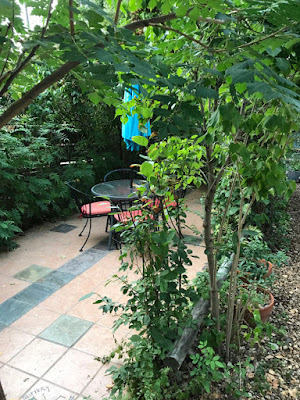 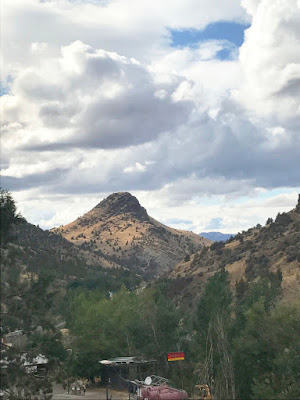 Mitchell itself looks like an old west mining town whose glory has passed. But rebuilding is in process and the town has three restaurants! 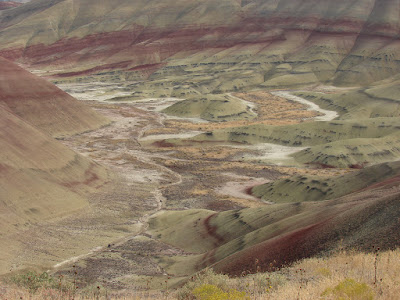 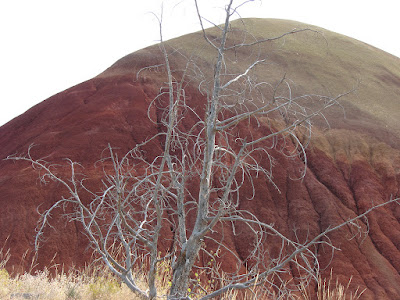 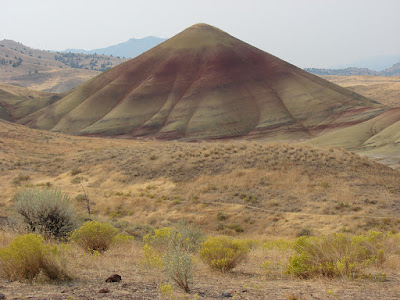 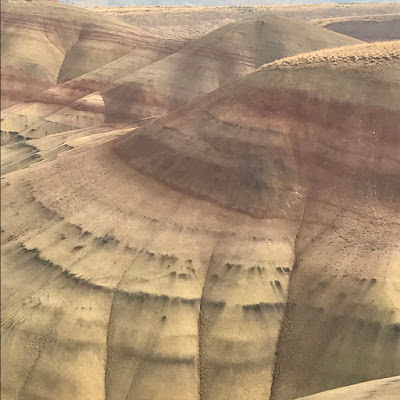 The last smoke from Oregon`s terrible forest fires still hung in the air when we saw the Hills. Still awesome but subdued in the haze. We knew that rain was coming and the next day we woke to dazzling weather. 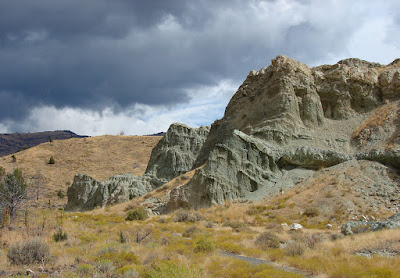 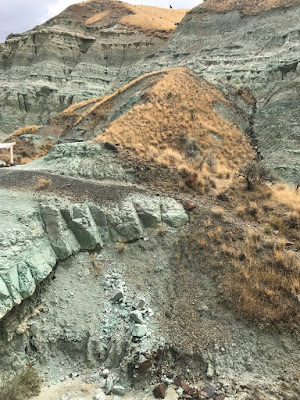 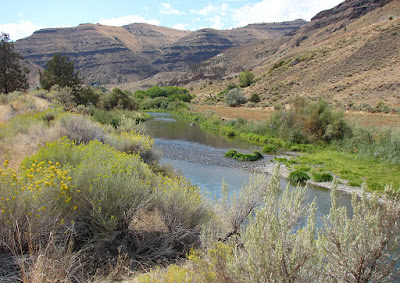 The Sheep Rock Unit 40 miles away was our next destination. The colors and formations were impressive and even the dried grasses and weeds had a pristine beauty. Pinkish grass against turquoise cliffs was a color combo I had never seen before. The sweet John Day River was a bonus.
Such an utter opposite to the rainforests where I live and only 4 hours from Portland!
Yes I painted; 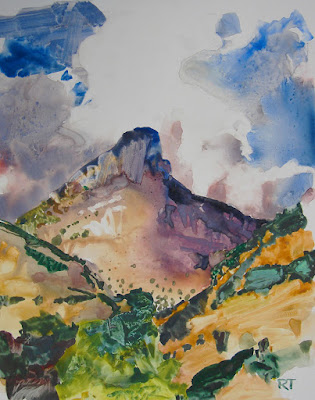 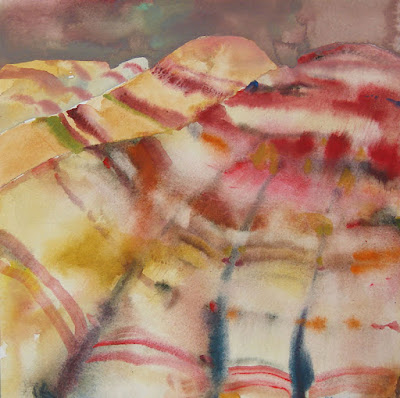 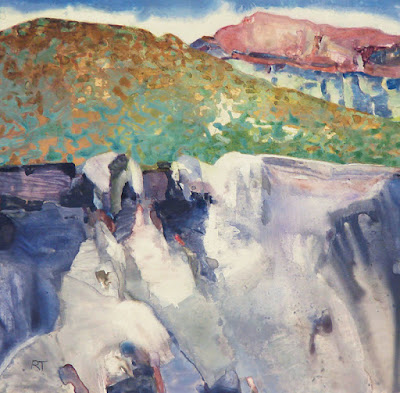 
I went to the coast next to do a demonstration at the White Bird Gallery in Cannon Beach where my show is in process; 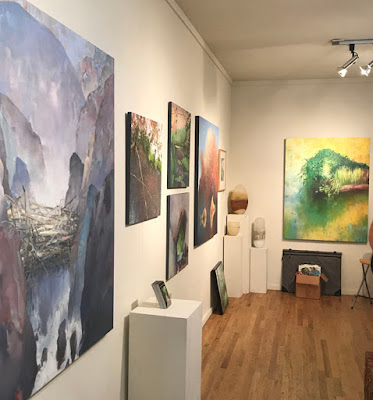 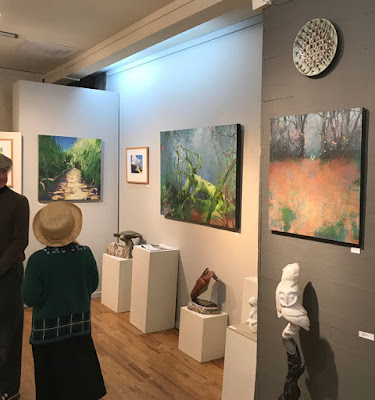 Nice low key event, and I wasn`t nervous at all this time. The painting at the top of the post is the demo and it was created from a 20 year old drawing.
We stayed in an old three bedroom house near the estuary and very close to downtown for only $100 a night! [Seasense-503 781 8886] 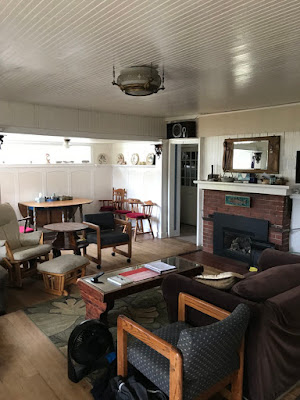 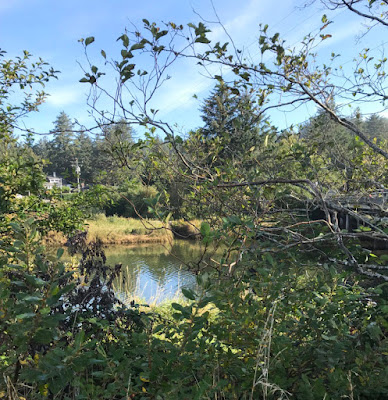 The next morning we spent at Hug Point. It was low tide and the caves were accessible. 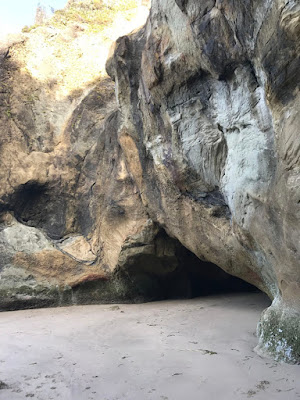 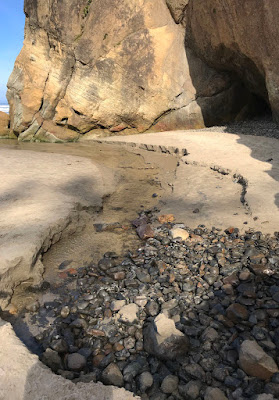 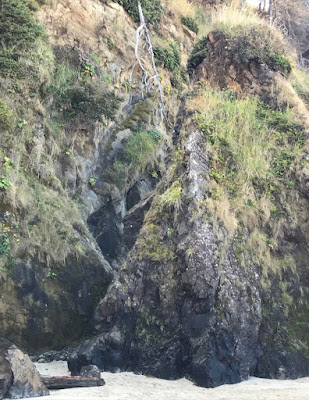 Two great weekends in Oregon. Didn`t break the bank and they left me feeling lucky.
Posted by Randall David Tipton at 3:39 PM

Beautiful work and great scenery! Glad you had a good trip!

I always enjoy your posts. Thanks for sharing. Your paintings in the show are much larger than I imagined. Would you mind telling me what type of fixative you use on the Yupo and how you mounted them for the exhibit?

What a great post! Thank you! I am so envious (but really happy) that you got to go to both places. And how different they are from one another. Those Painted Hills! Hard to even conceive of the forces at work that must of shaped them. And then the beauty of the coast. That's just the best of everything isn't it?

Your show looks amazing. The work takes on another aspect when you see it on the walls like that. In person must be spectacular!

Glad that you are out and about. The weather looks perfect!
Libby

Hello Michelle, I use a spray varnish made by Golden and frame them conventionally with a mat and glass. The big paintings in the show are oils but people frequently think they're watercolor.

Oh I could live in that cottage! Loved seeing your pics, though the landscape is so foreign to me I doubt I could get used to it. The sea caves would definitely capture my attention, and I would probably spend days sketching them.

Really enjoyed seeing your work in a gallery setting; much more breathtaking than seeing them in a pic online. I'm sure they are magnificent in person. One day maybe...

Love the paintings and the photos - will have to put that on my bucket list but I do not do well with really arid climates. The paintings really captured the place and I hope to see many more! $100 a night for a 3 bedroom house? What a bargain!!