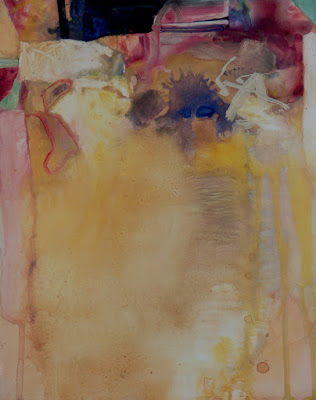 Even though I was very young, I remember the tension and anxiety of the Vietnam War well. Closing in on the draft age will make someone pay attention. Yet for all the division back then, this moment seems much worse. 213,000 dead as of today, the economy battered and the virus revealing exactly how mean our social order is. Essential workers, usually people of color, are exploited daily. The suddenly unemployed now lack wages and health insurance. The system is rotten, any honest person can see that. There is much to repair. 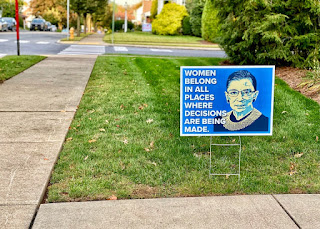 An adult is on the way, the nightmare will end at last. The GOP is about to be decimated. They refused to remove the sick leader when they had a chance 10 months ago.

As I grieved Ruth Bader Ginsberg`s death I learned so much about her that inspired me.  As principled and certain as her convictions were,  she never demonized her opponents but instead tried in her most creative arguments, to persuade them. Everyone notices how polarized our country is right now but it doesn`t have to be like this. There is no coming civil war or succession of states. I have little patience with those that swear they will leave the country. That is the ultimate white privilege, just walk away. We are here together, bound by our history together as brutal as that may have been. If the liberal West Coast became its own country where does that leave our black citizens in Alabama? No, if the unthinkable should happen again, we will need each other more than ever. We just need to take some deep breaths and learn to listen again. Let respect be non-negotiable.

All the while pressuring the powers that be for economic justice and opportunity. 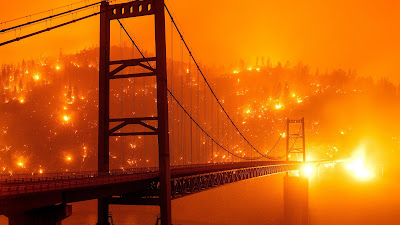 When I last wrote a blog post, the fires in Oregon had just begun. I was in the evacuation zone told to be ready. The flames never came close thank god but my husband`s hometown of Mehama was destroyed. What everyone in Western Oregon had to endure was smoke of an unimaginable magnitude. The air was between 400-500 on the air quality index for nine days. Under 50 is considered healthy. My hundred year old house could not keep it out. It was like the air wanted to kill me. I did absolutely nothing to avoid taking a deep breath. My studio was off limits because my radon remediation system is based on bringing air in from the outside to displace the radon. The experience was so extreme it put the corona virus into a new, proper perspective. I is nothing compared to what is coming by way of a hotter climate. When a rainforest dries out, there is a whole lot of fuel that can combust quickly. Controlled burns, the way the natives used to do them, is the big conversation now. No one wants to go through that again, it was truly terrifying.

Falls Creek, the jewel like tributary of the Umpqua River burned in the fires. I`ve only seen it twice, it isn`t nearby. The first time I entered it with John we had just had the worst fight. There was a parking lot so I pulled in and we began to walk in silence. The mossy geology there is so special; a small rainforest stream winds among enormous boulders that are draped in vegetation. The beauty is staggering and our discord was overwhelmed.

Here is a video by Elijah Finlay of the canyon before the fire.

Below are some of my paintings of the canyon; 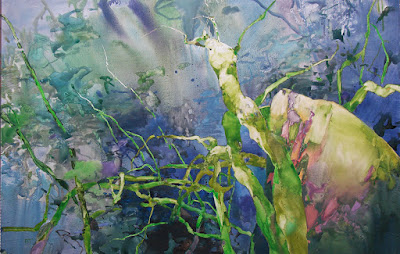 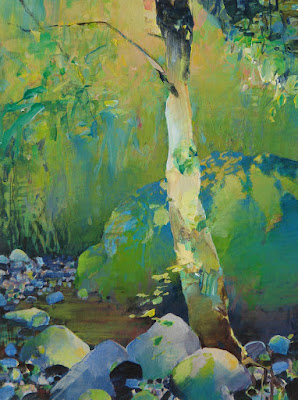 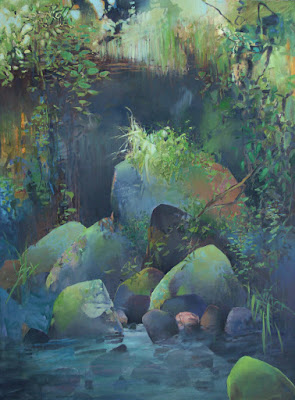 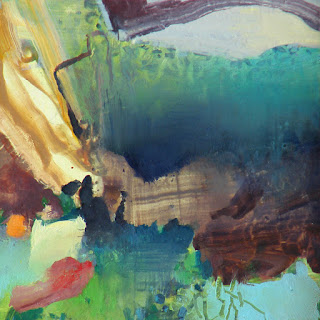 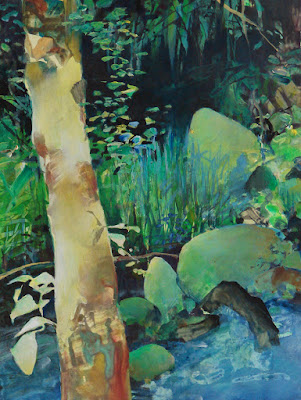 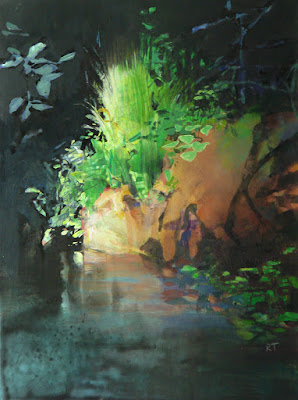 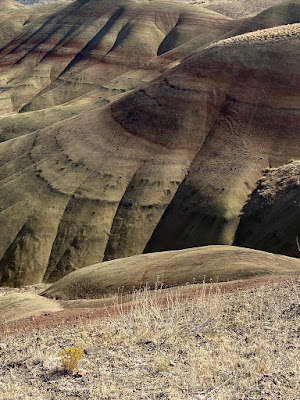 Last week I finally got away, first time since the quarantine. To the John Day Fossil Beds National Monument. It was austere colorful and bright. Truth is we went as much for the place we stayed, Painted Hills Vacation Rentals. This is such a fun collection of cottages perched above the funky town of Mitchell.  The Painted Hills are a half hour away.
Even did a painting; 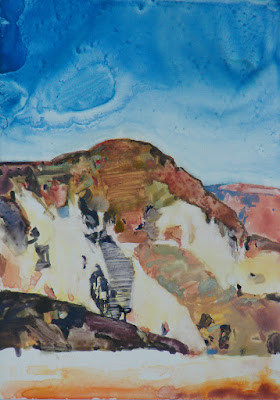 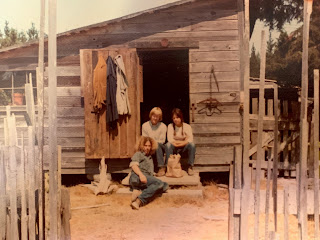 Equitable Farm 1973
Those that know me have heard me mention the 'farm'. I spent my 19th year living in that converted chicken coop above. I`m the middle one, the other two were friends from high school who had come by  on their way north to Vancouver. By the time I found the farm it had already been a real commune. Now it was a collection of young people who didn`t quite fit in. Willing to milk goats and weed the garden for a place to live. Everyone was female but me. It was the most educational time in my life. It was there I found my sister. 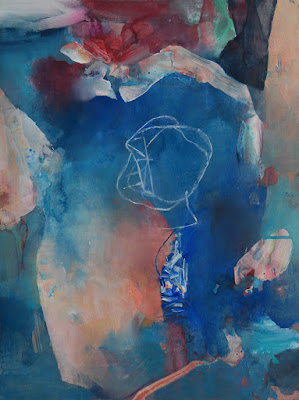 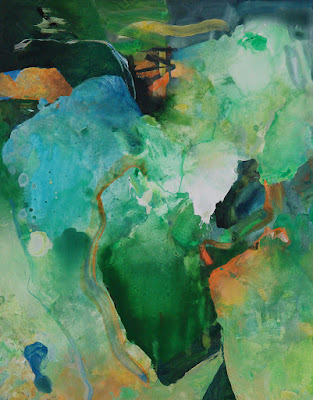 watermedia on Yupo 14x11 inches, 35.5x28 cm
Two new abstract paintings.
My practice and mental health have been all over the place. The social distancing especially is getting to me and I`m a recluse. I know many others with more tangible problems.
Music has been a comfort but in listening to a piece repeatedly it becomes infused with sadness and I need something new again. Most of us will survive this awful time but we will always remember how defeated it felt. A better day will come. 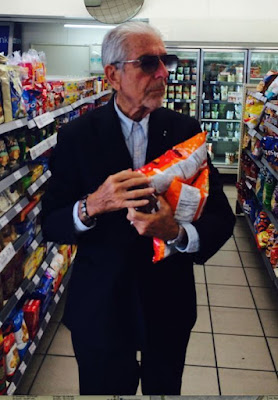 The late Leonard Cohen buying Cheetos
Listen to his encouraging song Democracy, sung by the Lumineers. 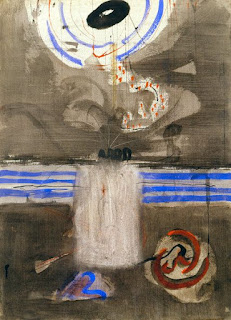 by Mark Rothko
Rothko`s watercolors from the 40`s fascinate me with their loose reference to myth and ritual.
Click HERE for work for sale in my studio
Posted by Randall David Tipton at 3:45 PM

Glad you have at least survived Randall - what a year. And still bringing us beautiful things to look at and news and comments to consider. - thank you .

Wonderful post. Food for thought as always. I’m guilty of saying I wish I could leave this country when it seems too hard to live here.
I really love the jewel like series of paintings of that canyon!
And thanks for the shout out. Love that Equitable Farm photo of you and friends. A seminal time in both our lives, for sure.
Tell John I’m sorry for the loss of his town, his history.
I love you. Lake

We had white skies in Michigan from the westward fires. I am so sorry but glad you are safe. I have never seen a rain forest and thank you for that. I wondered where you got your mellow, deep forest, misty subject matter. Your work really reflects the fog and mystery. Cheetos has been my comfort through this pandemic. Democracy is coming to the USA!