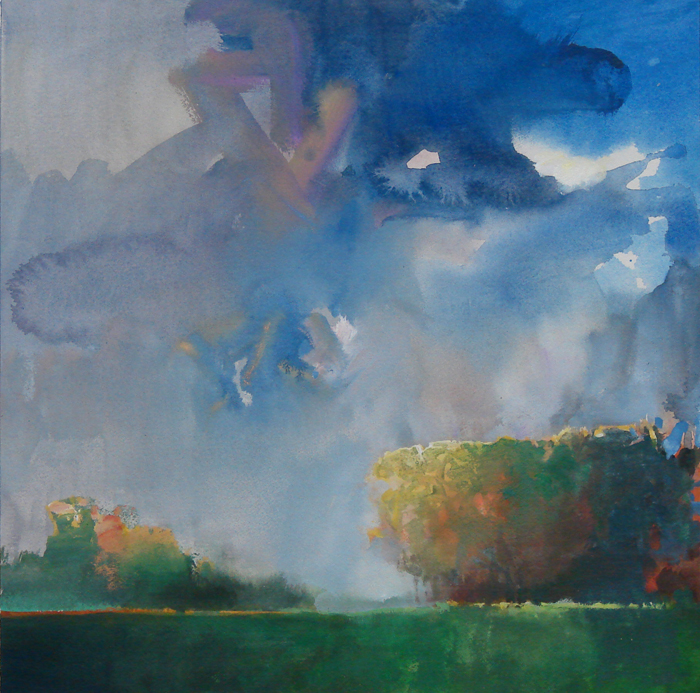 The last studio demonstration for a while was yesterday. I had floundered so at the last one, I needed to succeed. So I chose a 15 year old sketch to work from. It was so safe, my demo was about to conclude after just a half hour. And it was boring, which is unacceptable. Only when I was ready to fail did anything interesting happen.
Chris and Tim Lally were there and she documented the process and my messy studio in a sweet tribute.
I once was adamantly opposed to using photography in my process. I thought it was obvious when someone did. Young people can be so principled! I think it may be part of identity building. We often know who we`re not before we know who we are.
When digital cameras became the norm, I learned a bit about Photoshop and saw that I could manipulate a photo any number of ways, including illuminating the shadows! The ease of cropping an image led me to slowly adopt this into my practice. Eventually, I realized this was a much more productive use of my time than sitting in a lawn chair sketching. Like many people, I don`t particularly like to draw even though I think it`s critically important. Working from a live model is the most fun I`ve had drawing and that may be because I had no agenda for those drawings. Or it may be because I was drawing naked people. With the tiny landscape sketches, they were for basic compositional purposes. I needed them! Now I`ve come to believe that drawing and memory are closely linked though I don`t have any data to support that. I think all the drawing I`ve done allows me to paint now with minimal references.
Here are some of the minuscule landscape drawings that became the source of much larger paintings. The first was the one I used yesterday in my demo; 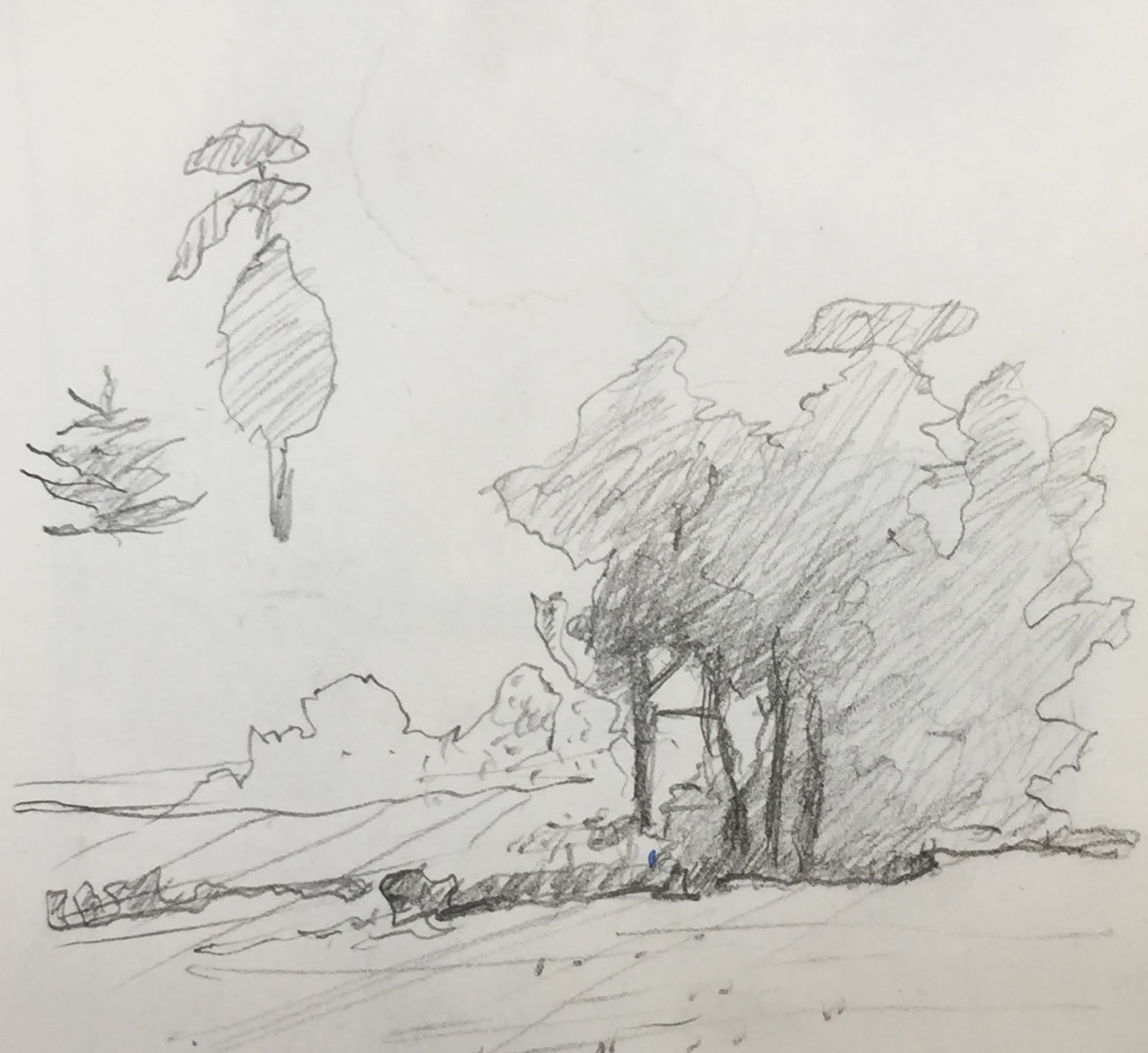 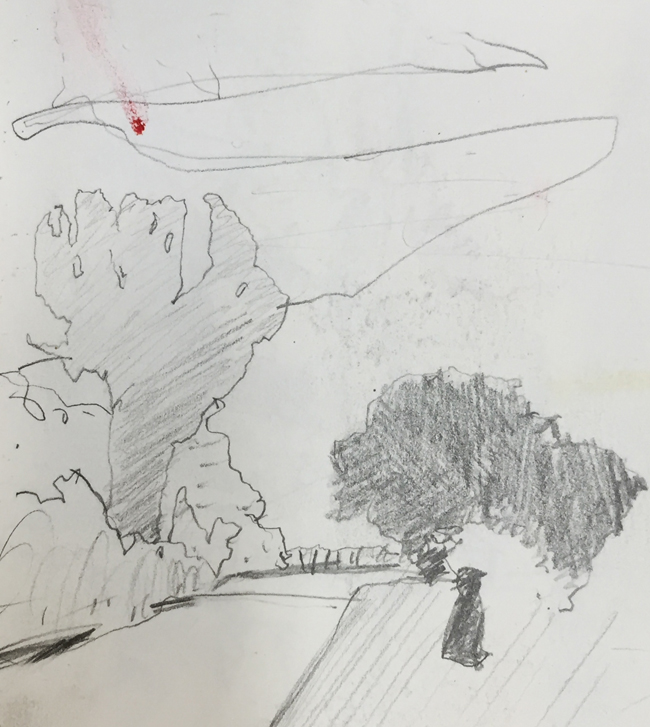 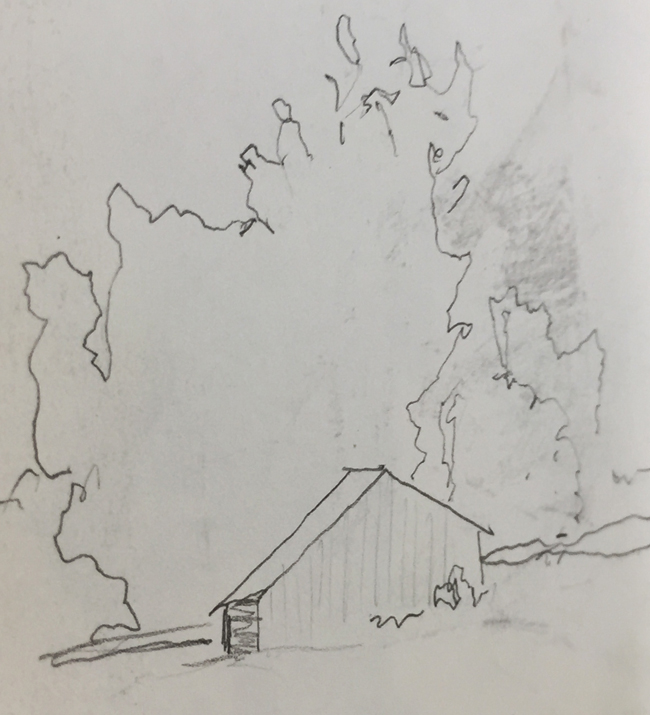 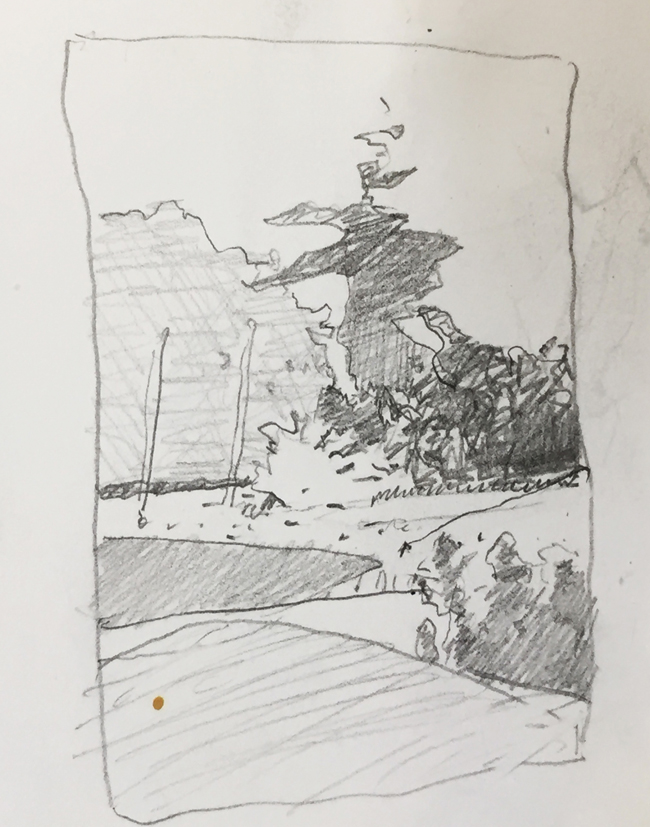 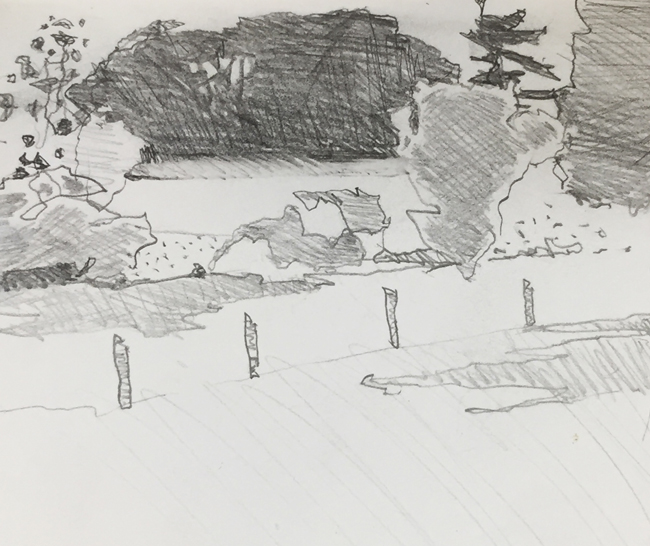 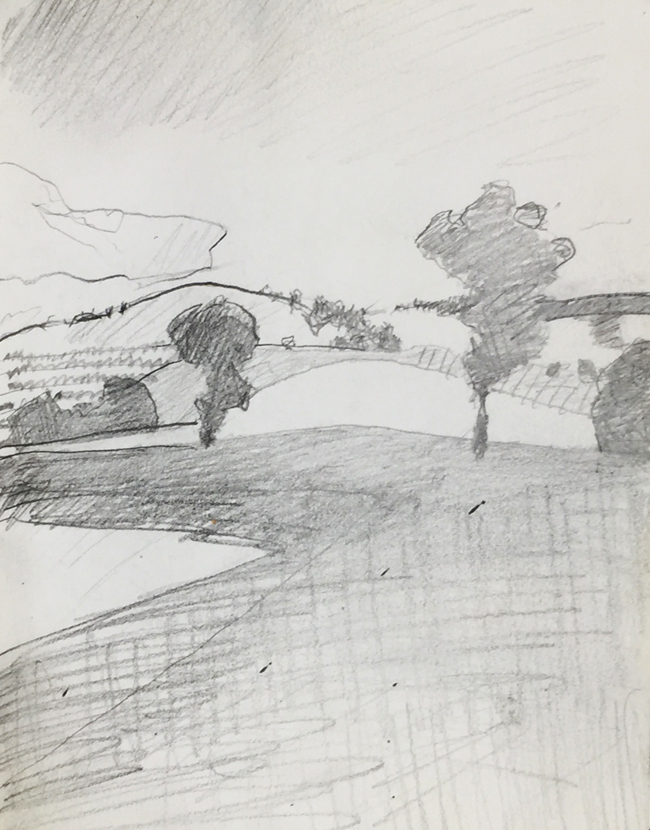 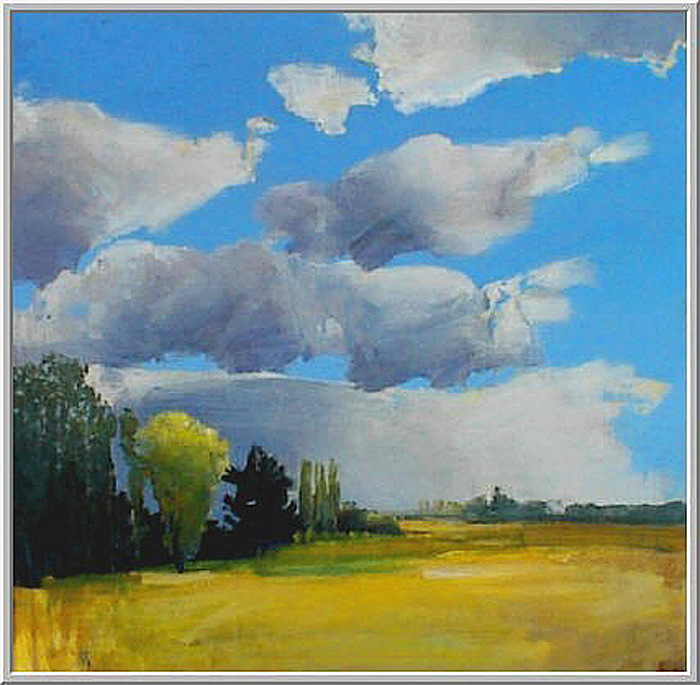 Jackie McIntyre told me about them a few years ago and she was right, they are affordable! The Canvas Place makes very attractive floater frames at a great price. There is one catch whether you want canvases or frames, they come in multiples. I recently bought some 12x12 black frames and they were a bundle of six for $62. I think if I had taken a painting that size into some of the frame shops around me, it would have cost a magnitude more than $10.50. I guess there are actually two caveats, the other being the buyer must attach the frame themselves. That meant a learning curve for me but I suspect most people could figure it out quickly. This company has even developed a floater frame for panels 1/4 inch or less. This was a response to the daily painter movement and the demand for something suitable for all those 6x6 squares! Great company, I`m even buying canvases from them now. Check it out. 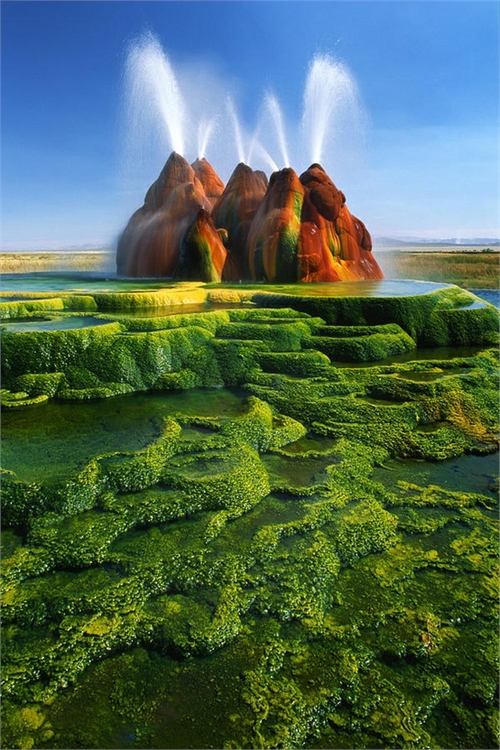 Have you ever seen anything this beautiful? This marvel of geology is recent, accidental, growing rapidly and is on private property in a remote part of Nevada. It`s a 'fly geyser'. More pictures and the story here. Go to the end to see an astonishing aerial video.

Robert Gamblin has been making high quality oil paints in Portland for years now. He is a gentleman. When their line of 'radiant' colors came out, I assumed [wrongly] they were like interference colors or opalescents. A gimmick in other words. Since they weren't too expensive I bought a tube of radiant turquoise. It was so opaque it radically altered anything I mixed it with. Even though transparency is a hallmark of my work, I`ve come to depend on it. I use it in small amounts and especially like to have it on my brush with some other color. The stroke is then two toned. The white is just dazzling and I use it whenever the brightest value is called for. I find it indispensable. 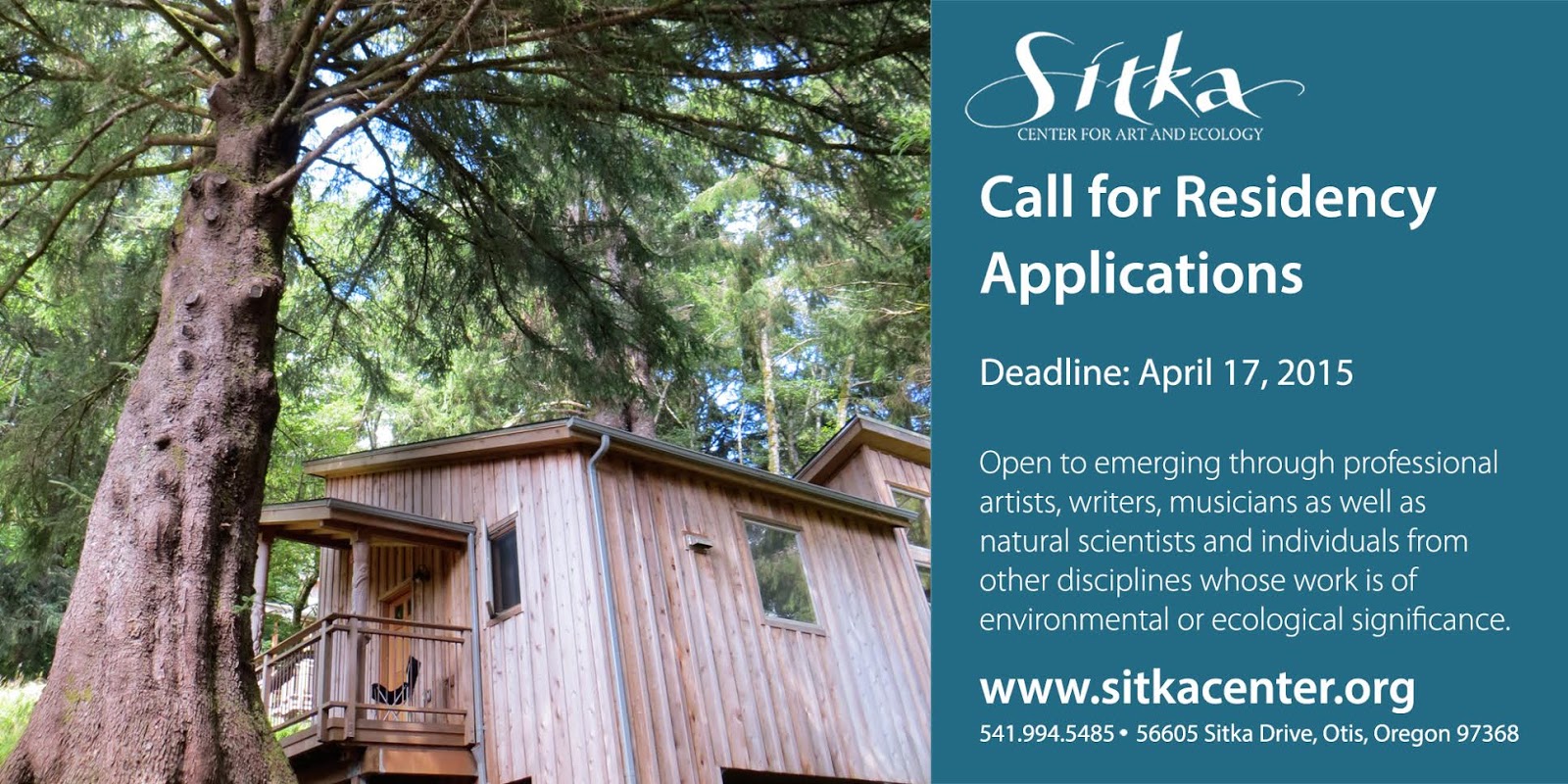 Four days left to apply for this opportunity of a lifetime!

no more studio demos for a while, I`ve revealed everything!

For me, working from a photo isn't an option except for checking details. I find my work looks labored and nowhere near as fresh as working from life. Plus, I happen to love to draw.

I laughed about young people being principled. For all of our open mindedness we are often very close minded! (I've come to incorporate photos also and am still learning. I think it is a confidence thing for me.)

I find drawing and sketching to be great for the reasons that you mentioned-I think it helps to reinforce your memory of something. It certainly helps my hands to make the brush do what I would like it to do. (Most of the time and who am I kidding? Sometimes my hands just don't cooperate!)

What a feast - the artwork, the photos, the stories, the tips! Thank you for a wonderful blog post. And thank you for the demo and for allowing me to post photos of you and your artwork on my site. My blog never looked so beautiful!

I found CanvasPlace.com a couple yrs ago and yes they are nice frames and affordable. I had a problem with the L brackets being 1/16" too long and they stuck out from the back of the frame....they had to send me ground down brackets. A friend recently had no issue like that so I hope the problem has been resolved. Randall, are they made in the USA? Nice to hear the canvases are good.

It's always a pleasure to watch you paint, Randall. Thank you for your generosity and openness. You are like a fine jazz improvisor -- confident and intuitive and ready to make a bold statement when needed. You are an inspiration!

You are hilarious, Randall! I thoroughly enjoyed this post. Funny, newsy and correct 'bout most things (meaning I share your politics).
I'm so glad you mentioned Rick Barstow. A brujo, for sure. There's a good article about him in the latest Bark Magazine.
Hey, you expected The Atlantic Monthly?