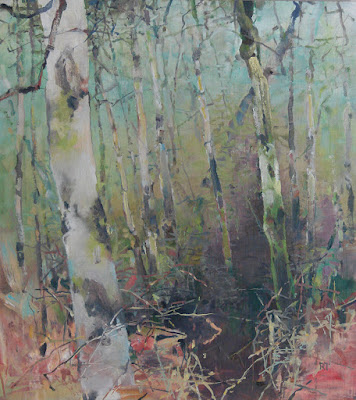 
Here are some things I`ve been working on but never posted.
Three or four years ago I was on Minto Brown Island in February and at first everything looked brittle and dead. But as I walked either the light changed or I did because it became much more interesting. I took some photos of a swamped forest that appealed to me because of its frenzy of vegetation and its utter inhospitality. I`ve painted it many times but only in this one did I get the mood right. 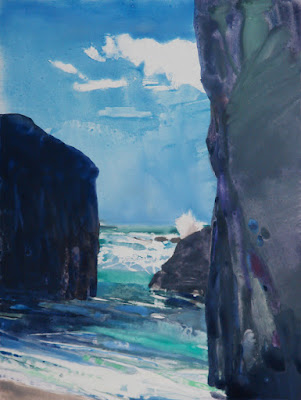 
In Oceanside, my favorite coastal getaway, there is a place at the base of the headland where the ocean is forced through a narrow passage between a massive boulder that looks like a hat box, and the cliff. As the sea surges in, there are all these sections in the water at different heights and planes that change  and shift in an instant as it pushes forward. It`s fascinating and somewhat hypnotic. Again, I had tried multiple times to get this procession right, but to no avail. Until now. 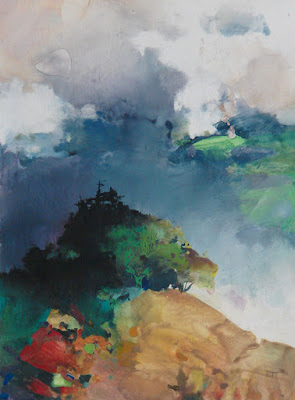 
This is an older piece I could never quite let go of, the inspiring experience was too memorable. I was driving to Ashland one Spring and the hills along I-5 north of Eugene grabbed my attention as usual. Storms were rolling off the Cascades behind them almost giving them the appearance of islands in a mist. 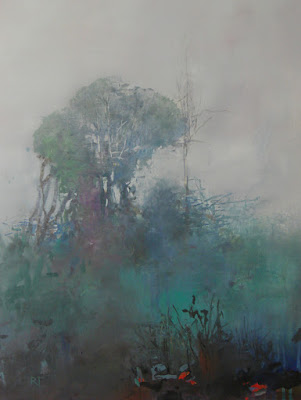 
Another go at the copse of trees that borders the Tualatin River in a place where I walk. I get obsessed with certain views and try repeatedly to get their character. 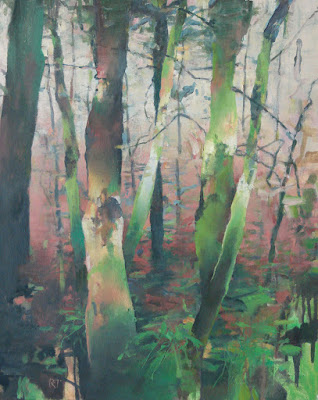 My only hope was that he wasn`t really a Republican. I mean would a true conservative politician hang out with Howard Stern? Well I guess they do. As the president elect announced his cabinet, it was quite clear he was going to surround himself with minds as small and mean as his own.
This is going to be awful yet I do think our country and it`s democratic institutions are up to the daunting challenges ahead. This essay from the New Yorker articulately spells it out.
I`ve joined the ACLU and intend to make my voice heard. I wrote the president and the Justice Department about the Standing Rock confrontation and it looks like the good guys won!
I`m going to change my party affiliation to Independent with the idea that I may be taken more seriously if my vote is perceived as winnable.
With the Black Lives Matter movement we have begun to tentatively talk about race in an uncomfortable but honest way. This is no time to turn away from that discussion and oddly, the rise of hate crimes may propel this forward even more. I hope so.
I was doing errands last week and heard the poet Clint Smith on Here and Now. A transcript is here and there are links to two TED performances where he eloquently describes in poetry exactly what it`s like to be black. At least as it interfaces with authority. It is just heartbreaking.
I want a world where young black men fear for their insurance rates at traffic stops just like I do. Not their lives.

I first saw his work 30 years ago in Portland and immediately thought we were on a similar 'quest'. Now we`re both showing at the Marcia Burtt Gallery in Santa Barbara Calif., and he feels like a friend. Though he lives in Tacoma we`ve not met but I think we will. Take a look at the landscapes of Michael Ferguson. 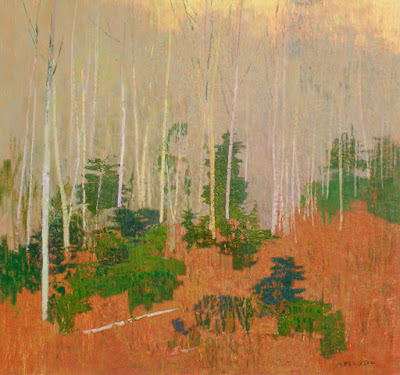 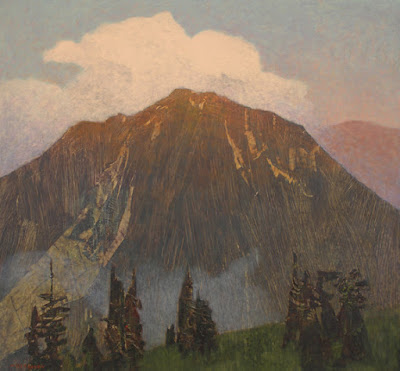 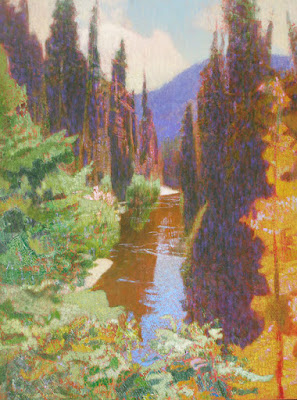 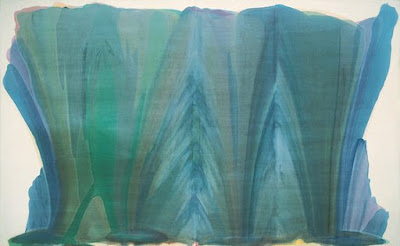 
He wasn`t the first to pour paint, that was Helen Frankenthaler, but he invented new techniques that expressed the deepest of human emotion.
Look at his 'veils'.
For me, art doesn`t go any higher than this. In his 50 years on earth he produced a profoundly moving body of work.

I love how your posts go beyond summarizing your goals and achievements, to elevating the art of others, commenting on the current times and bringing it all together somehow. Excellent work as always!

I suspect that you and Michael Ferguson will get on together just fine. What beautiful work!

Pieces 3 and 4 are my favorites though they are all lovely. I have a new appreciation for what the fog and mist does to the landscape and of course anything with the suggestion of a mountain appeals to me.

I read something by Parker Palmer not that long ago. He described steps he was taking to become involved on the immediate, micro level. (He is trying to cope also just like the rest of us.) I think many people are struggling to understand and to assimilate what is happening. Sounds like you have taken some positive steps.

Hope all else is well. Glad that you are working away.
Libby

It looks like you've stayed busy as the cold has kept us indoors. I am especially drawn to "Sea Slot", with the luminosity of the water emphasized by the brilliance of the Yupo. A wonderful post altogether. And I am intrigued by your intention to change affiliation to Independent; if you are doing it, I wonder how many other Democrats are sending the same message that their flock won't hold together unless the shepherd starts thinking about their best interests. I'm still in favor of a third party if only we can think of the right name for one. My current thought is the "Blue Party", but we wouldn't be able to self-identify as "a Democrat", we'd have to say we were "Blue", which sounds like we're really sad, which I guess we are.

Congratulations on the show! Love the Ferguson work and, of course, the Morris Louis (he's been a favorite of mine for a very long time).

I so appreciate your thoughtful, suggestive and insightful blogs. Your paintings stir my emotions and invite calm and peace - something so needed in these times.