The Coast, vaccine and Easter 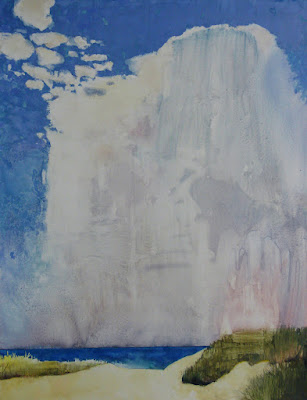 It was just a proposal, nothing definite and certainly not a commission. Would I like to paint a coastal image for a commemorative poster? That`s my third attempt above and it`s from a 20 year old sketch. Below are the other two; 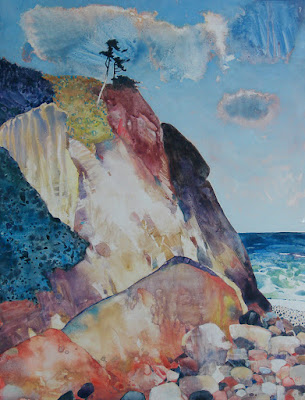 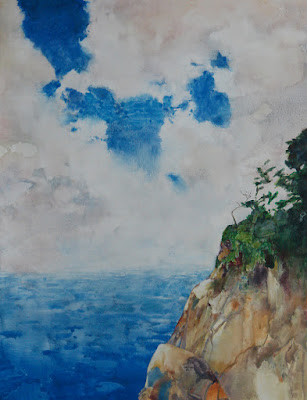 North Coast watercolor on Yupo 26x20 inches
I`m not sure they are poster-grade images but I do know that I am finished with trying. If the impulse to paint an image doesn`t originate with me first, it`s hard to get at, to find an emotional core to guide me. This painting below I actually think would make a good poster and it was done last year; 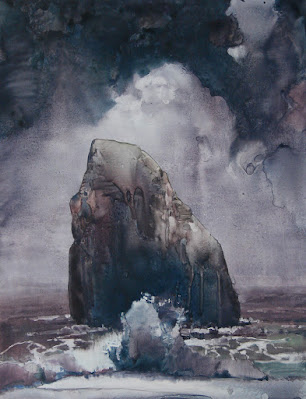 Coastal Nocturne watercolor on Yupo 26x20 inches
My second shot of the vaccine was last week and I was elated the whole day. Freedom from fear! Yet it didn`t last, a celebration involves others. Until the country moves past this pandemic, the joy will still be  measured, hopeful and anticipatory.
People I love, on the right and left politically, are refusing to be vaccinated. This is utterly shocking. Are they reading what Covid-19 can do to a person?? After what the world has endured the past year, it`s clear that this decision is political.  Also tragically misguided. Without mass vaccinations, the virus continues to mutate and elude its elimination. Who wants this to continue? Not a future for me. These holdouts will have to arrive at a different attitude in their own time. Persuasion isn`t possible yet. I hardly know how to handle my disappointment and anger. 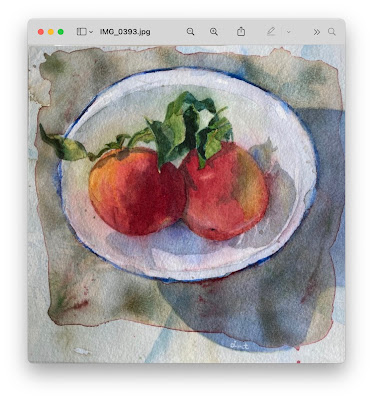 Peaches by Donna Thibodeau
The Brush and Palette group of Michigan painters asked me to speak to them in a Zoom presentation. I agreed though I wanted them to ask me questions. I have no agenda and am such a reluctant teacher because the role itself feels inappropriate. So I sent them links to interviews and my website and when the meeting commenced, they were prepared. Almost every educational situation I`ve led has focused on technical issues. Those are not unimportant but they are far less relevant to what an artist is 'saying'. I don`t know how to guide anybody through that question and yet it is the most important part of being a painter. Why do you want to do it? What compels you? Annie Lamott`s advice to writers is to write the books they want to read. What paintings do I want to see? It`s a simple but profound question. I do believe we all have a birthright to creativity. Yet even the most casual hobbyist is going to paint something. What will it be?
The group asked me to judge a show of their work and the first prize winner was Donna Thibodeau`s Peaches [above]. I chose it for its clarity. From idea through execution, she succeeded in a forthright simple composition using clear, gorgeous color. 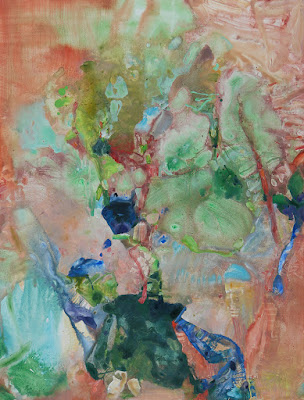 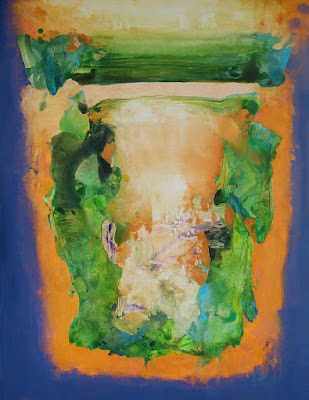 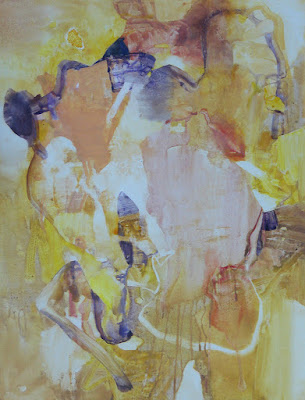 Untitled yellow watercolor on Yupo 26x20 inches
My abstract efforts are still all over the map but I am making progress. They aren`t taking so long, just a couple of days. I haven`t found a language of my own yet but I`m closer. Concentrating my efforts to watermedia on the plastic paper Yupo has also helped along the evolution.
My buddy Jo Reimer sent out a notice about a new line of super opaque acrylics made by Golden. I`ve wanted a white as dense as oil paint. A holy grail of sorts. As I move away from oil painting the one thing I haven`t been able to replicate in acrylic is a spontaneous gestural mark that dries as it is painted, as it is wanted. A gesture is impossible to repeat if it dries looking transparent or equivocal. This drove me to oils in the first place back in 1984. I need my brushstrokes to be stable. In oil painting this is not a problem.
So anyway, I went to the Golden website and saw that they will do custom orders. I asked them for the densest white possible and it just arrived in the mail! 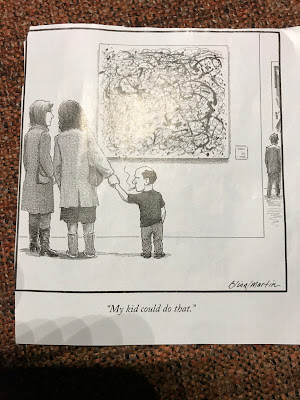 cartoon by Harry Bliss and Steve Martin
Easter Sunday again. Though it doesn`t seem to be the big deal of my childhood, I think it is a shared, welcomed holiday. Our country is more tolerant now in large part due to the decline of the church in our lives. This is a more secular country than ever. For better and worse. I left traditional Christianity as a teenager because the concept of a loving God punishing people in hell throughout eternity was a contradiction too huge to ignore. Upon inspection, other parts of the story didn`t hold up either. It looked pretty obvious that man created god in his own image. Yet the great philosophical-spiritual questions remain. It takes a lifetime to create a new understanding of the divine.
Then there is Pastor Adam Ericksen;

As a bird flies, the Clackamas United Church of Christ is may be five miles away from me. I saved this photo from a Reddit post. In the comments I read Adam walks his talk. That the church is actively helping the poor and desperate here in Oregon. The spirit of Christianity is as radical as you can get; love your enemy. Who can do that? Who will even consider it?
He`s on to something. A better world. 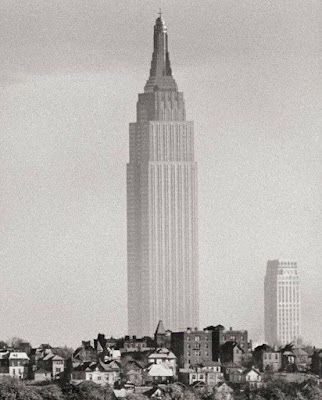 The Empire State building from New Jersey 1930`s
Isn`t this photo phenomenal? Just imagine!
Somewhat similarly, I was running in a park in Queens once and saw only trees with the two towers of the World Trade Center above them. Then, I found a $50 bill on the grass! 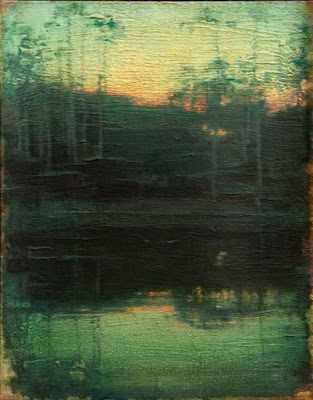 Hi Randall - it really is unbelievable, and shocking, that people will not be vaccinated. As we here in Juneau are doing pretty well getting people vaccinated, people elsewhere are working on new booster shots for the years to come. wow.
I like your coast poster try in watercolor on Yupo 28 x 20 because it is so colorful ... unlike most days on the Oregon coast.
The peaches by D Thibodeau are super nice.
I am not sure if you looked at my blogpost of March 7 (https://terirobus.blogspot.com/2021/03/teris-virtual-art-gallery.html) but I contacted Exhibbit.com and signed up and had a virtual gallery show of my Strong Women paintings, something I was going to do in a venue here in Juneau, but then ... so anyway, if you have a chance to take a look at it ... there are links on the blogpost, I would just love to hear that you got in to view it. It is ending April 6. If you are on your laptop or desktop the link will take you right there. If on your phone or tablet you must download the Exhibbit App.
I will understand if you choose not to look.
Also, I'm sorry this comment is so long ... I won't be offended if you do not publish it.
Take good care,
Teri

Thank you for publishing my painting, “Peaches”. It has been a tough year and that little 8x8 has been a release and so rewarding. We are so lucky as artists to have that outlet. I also felt elated with my complete vaccine but the freedom is restricted while waiting for the rest of the population to catch up. In Michigan we have the highest number of cases and it doesn’t make sense. Why is our state opening up for recreation and kids are frightened to go to school? Hopefully, by fall we will have some normalcy if we can hang on with our masks. Randall, I like all of your poster tries. For me, I liked two and three. I like the contrast of land and sea and sky. The recent one is very dramatic but more moody but shows the majesty of Mother Nature. Thank you for your wonderful presentation for our art club. Seeing artists from all over the USA during lock down on zoom has been a perk.