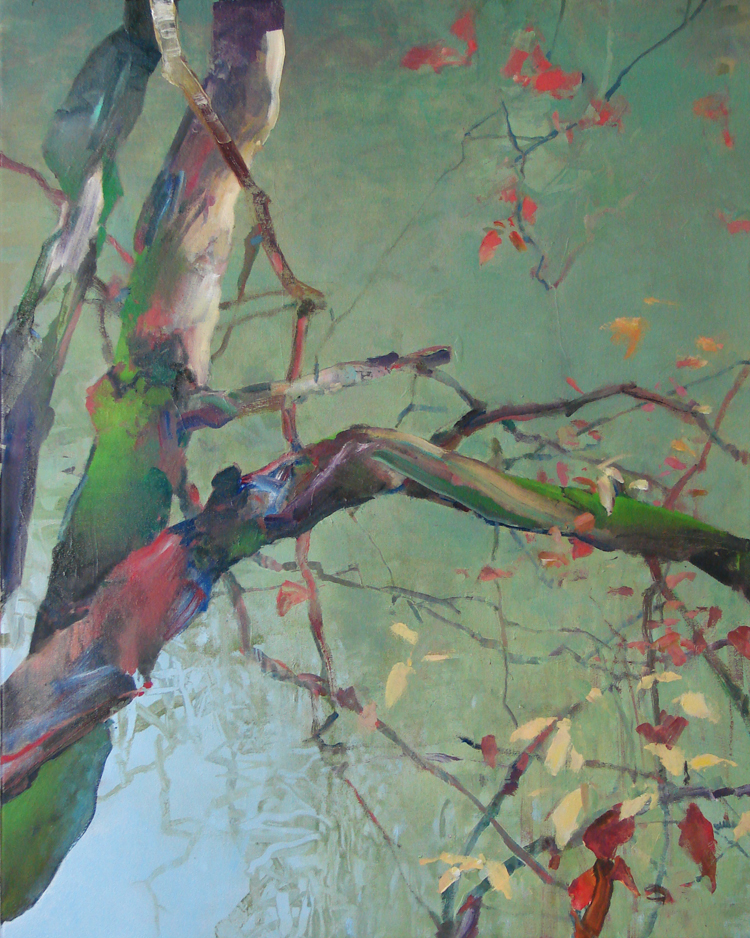 This new painting comes from a walk last week along the Tualatin River. I live close to its destination, the Willamette River. Here it`s at its widest and at this time of year flows with purpose. Yet even swollen with rain and silt, it`s maternal and graceful. 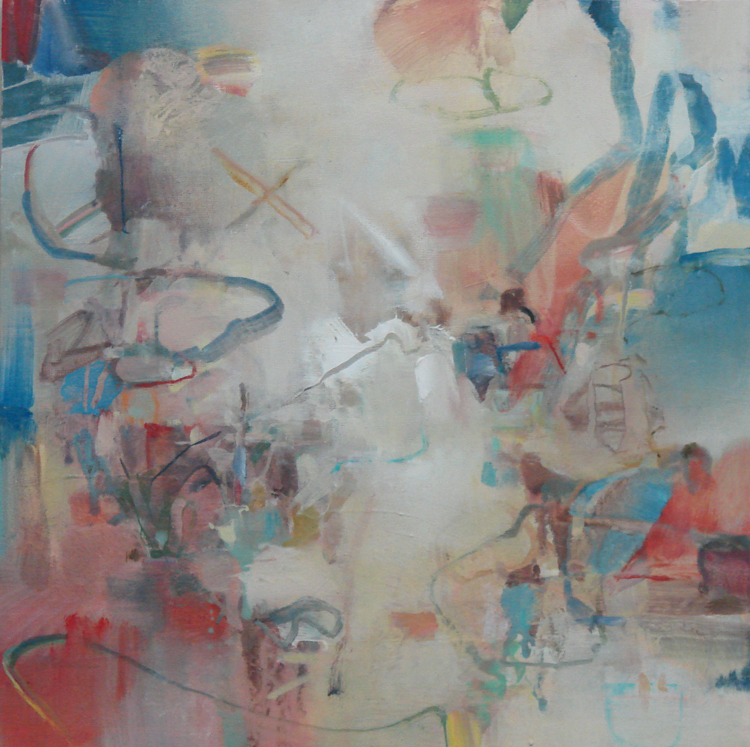 Another untitled abstraction, this makes five of these 12 inch squares. I think it`s out of my system now.

A quest I`ve been on for decades is finding out what kind of paper Georgia O`Keefe used for her watercolors of the 19teens and then getting some for myself. This was in the beginning of her career and I don`t think she could afford hand made imports from Europe. The works are remarkable in their simplicity and eloquence. The colors sit on the surface and sometimes flow into each other. With extreme yet painterly minimalism she suggests vast spaces; 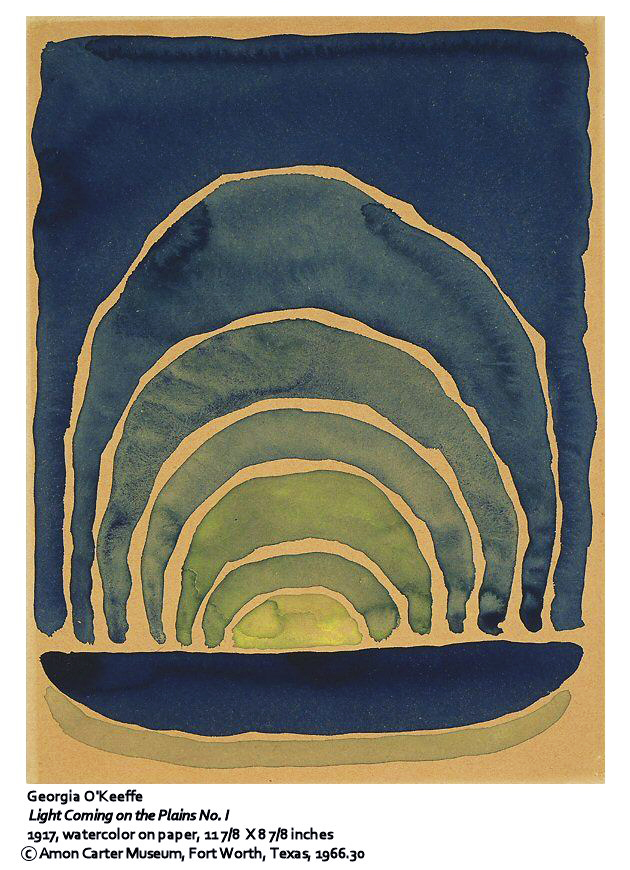 Light Coming on the Plains 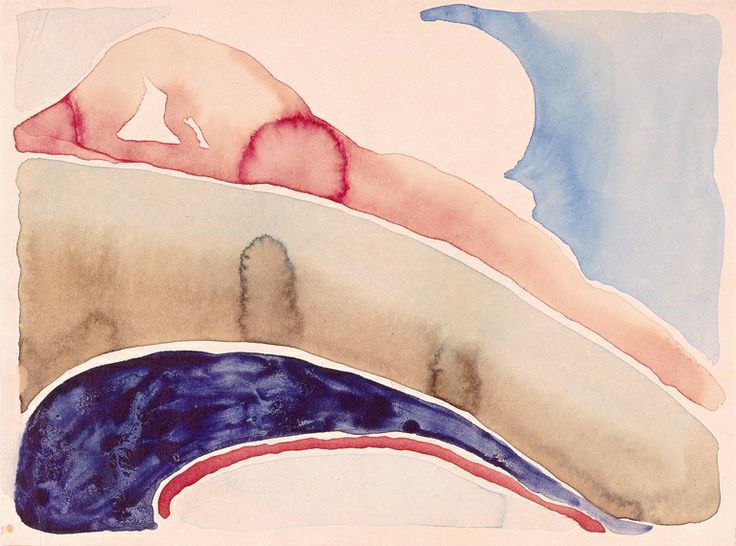 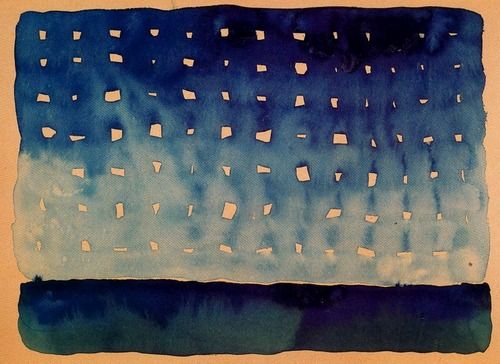 She`s best known for her giant flowers and New Mexico landscapes but it`s these modest watercolors that get to me. Here she is in a short video.
I was in I`ve Been Framed recently and thought I might have hit pay dirt. Amid the reams of odd, sometimes unidentified, discontinued and surplus papers I found a legal size document paper that was 100% cotton. Nice texture to it and at 5 cents a sheet, a steal. I bought 20 and tried it as soon as I got home; 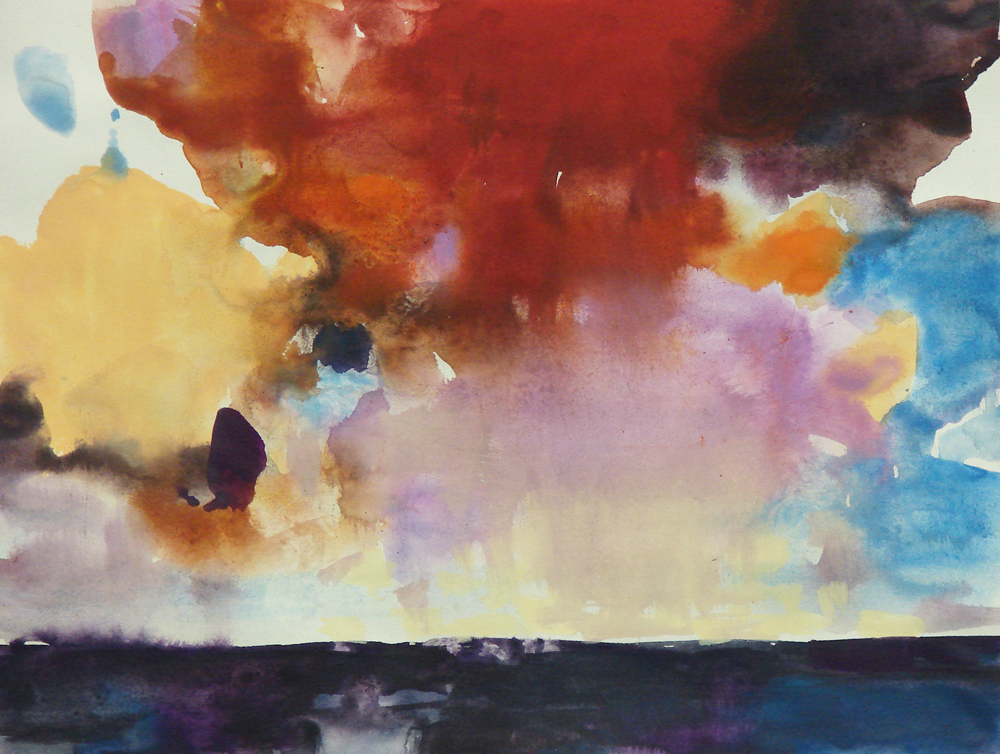 Not bad but not as hard a paper as I had hoped for. This took lots of pigment and the washes were absorbed in a less than sparkling manner. The search continues... 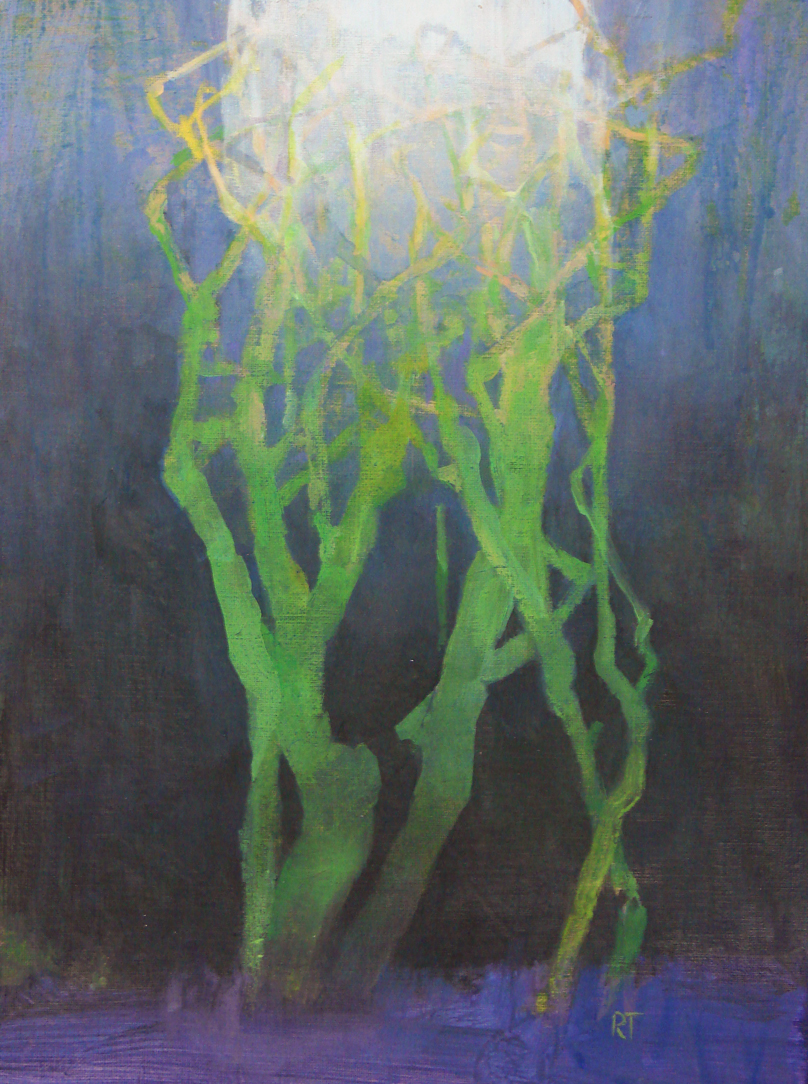 A few years ago when she was still driving, during a bright and rainless December, my Mom asked me why the sun was always in her eyes. It might have just been conversation, maybe a senior moment, but I didn`t know where to begin with an answer. I thought it was common knowledge how the seasons happen, the tilt of the earth etc. but maybe it isn`t?
I`m not a pagan or Wicca or anything New Age, nonetheless I think the winter solstice is truly significant. The early Christian Church agreed and placed the birthday of Christ right at this juncture. In the northern hemisphere it meant the return of a growing season, warmth and the chance of continuing survival. Life and Death. The progressive return of the sun, our first god, represented hope itself.
This is the season for light, these are the longest nights.

The Winter Solstice is a magical time for sure; a time deserving of deep thought.

Randall, Your work is so special. I marvel at the beauty you find in everyday scenes. I look forward to your blog posts knowing each will contain sights wondrous. Wishing you the happiest of holidays. Hal

Yes, I too love your work and your thoughts. Hoping we live to 190 years ! Happy Holidays

Randall, I know you said you aren't a Wiccan, but when I stand in the circle of followers watching you stir the paint with your special magic, sometimes it feels like we are missing only the candles and a ceremonial knife.
Happy Winter Solstice anyway, since we all rejoice in the returning of longer days of sunshine.

The images of Georgia O'Keefe in her skirts in the desert always make me chuckle a little. (As do the men in their suits and ties painting on location.)

It's hard to overlook how important daylight must have been in times past. Things seemed to be a little more elemental somehow back then.

Beautiful paintings as always. I've really enjoyed the abstracts. They seem like a natural extension of all of the other pieces that I like so much.

Happy holidays to you. I hope that they are filled with much light:)

Light in my eyes, too.
As I have grown older and have lost a bit of my proud 5 foot 1 inch stature, I too find the sun to be in my eyes all the time when I'm in a car. Perhaps your mom experienced this as well? Sunglasses are a must!

I love your work. I especially perk up when you do watercolor which is what I do. I spend a lot of time on your blog. Thank you for sharing so much.