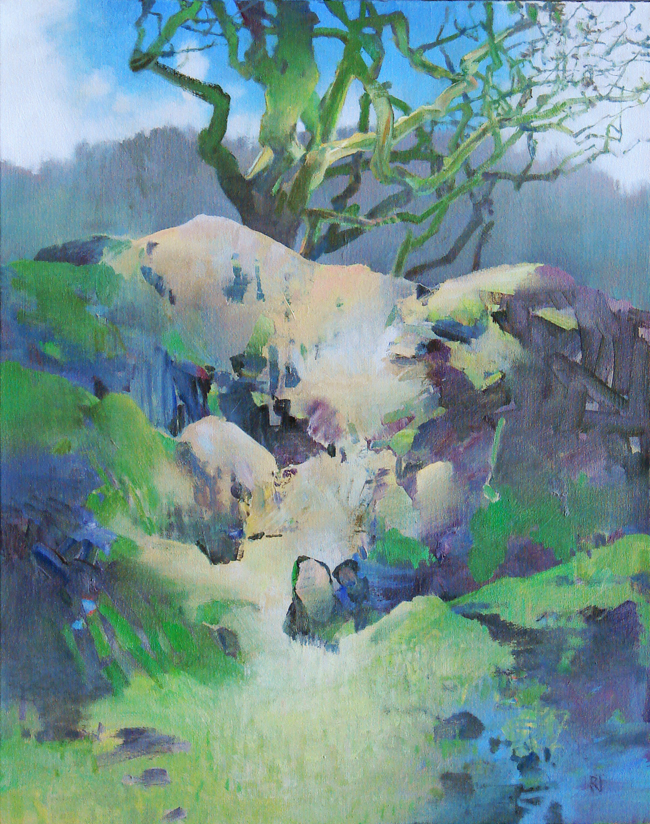 I was trying to suggest the tipping point where winter begins to move toward Spring. Here, that`s usually late January.
I hike frequently in the hills above Lacamas Creek WA with my sister in law Mary. I always think it`s visually interesting though I remember taking some friends from Nebraska there during a bitterly cold moment a few years ago. They were not impressed with the wilted frozen ferns, the biting wind and treacherous footing. Normally it`s just wet, usually green with moss and there are stands of dramatically gnarled oak trees. Walking uphill among the rocky outcroppings you can see the branches rising behind the boulders. I love this and have painted it several times. 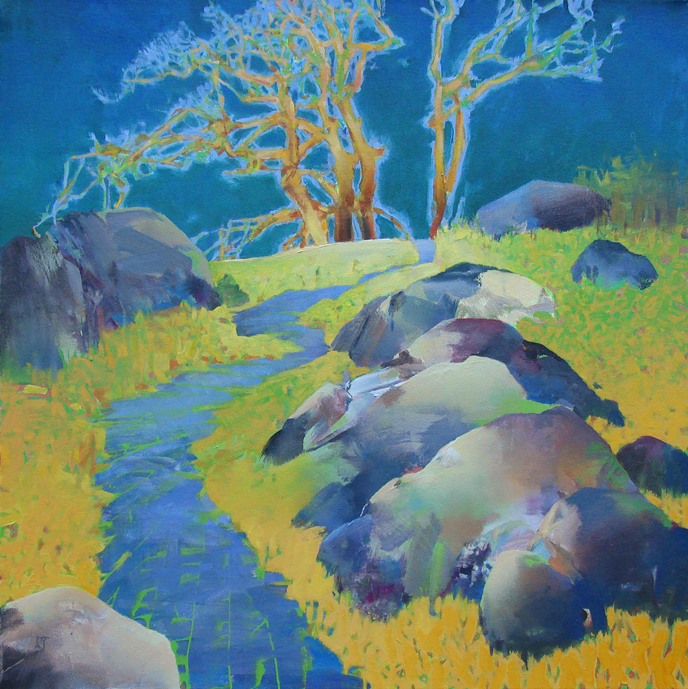 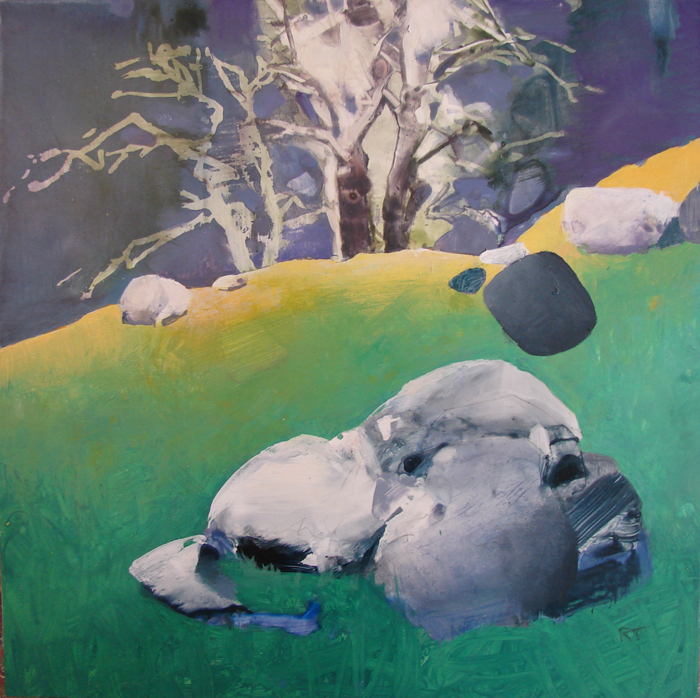 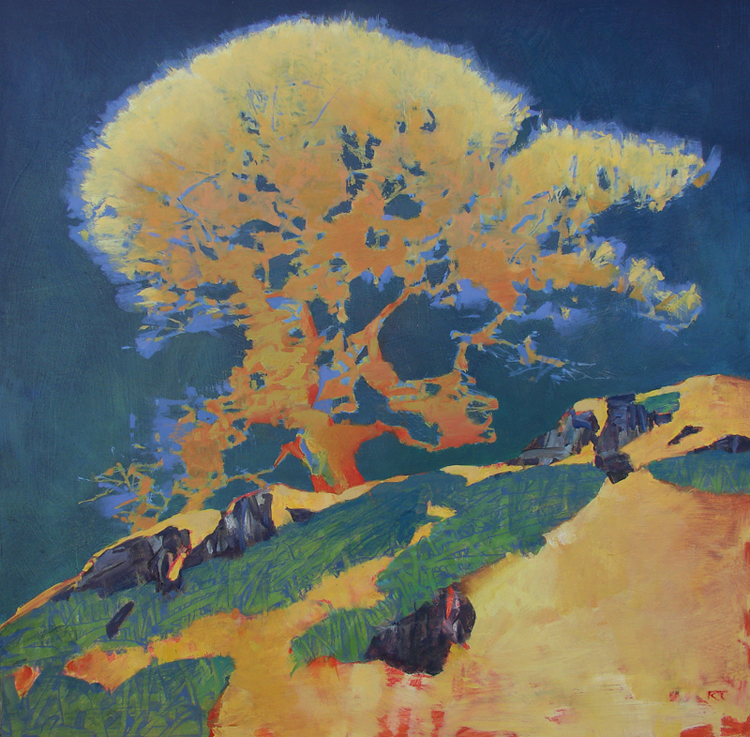 In the Spring of 2010 I had the most unusual visitor. She had decided  she deserved good art to live with even though she was near the end of her life. I can`t remember the wording of her google search but somehow she found my work and asked if she could come visit my studio. So between kidney dialysis appointments, this elderly woman drove non-stop from Boise Idaho to Portland, checked into a motel then called and came over. She bought three of my best paintings and returned home the next day.
I have never felt so flattered and validated  in all my life.
Yesterday one of her sons called to say she had passed and would I like to buy the paintings back? I have never been asked this question. These are the paintings; 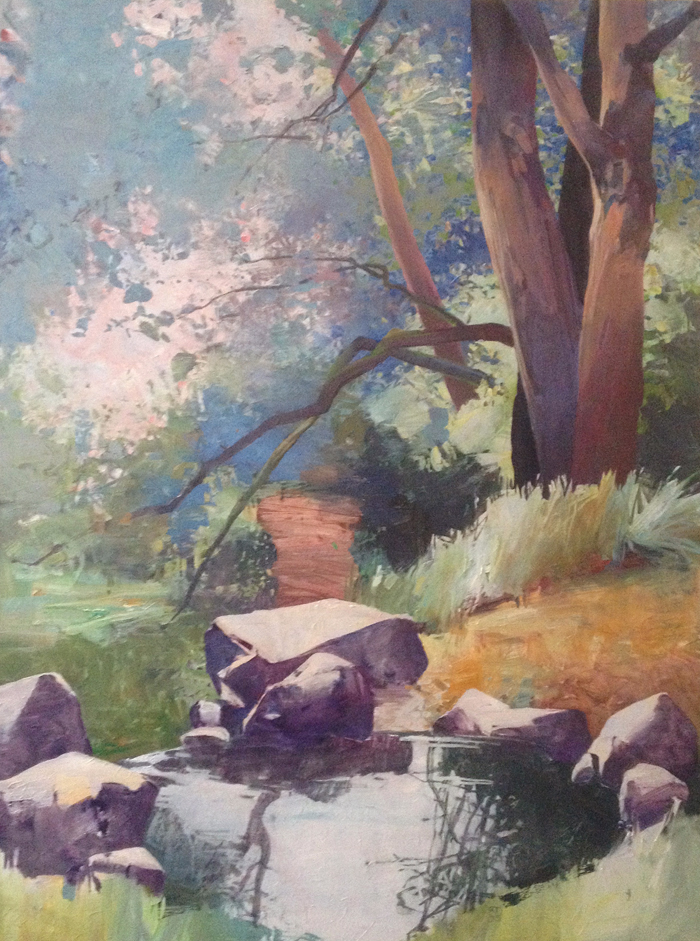 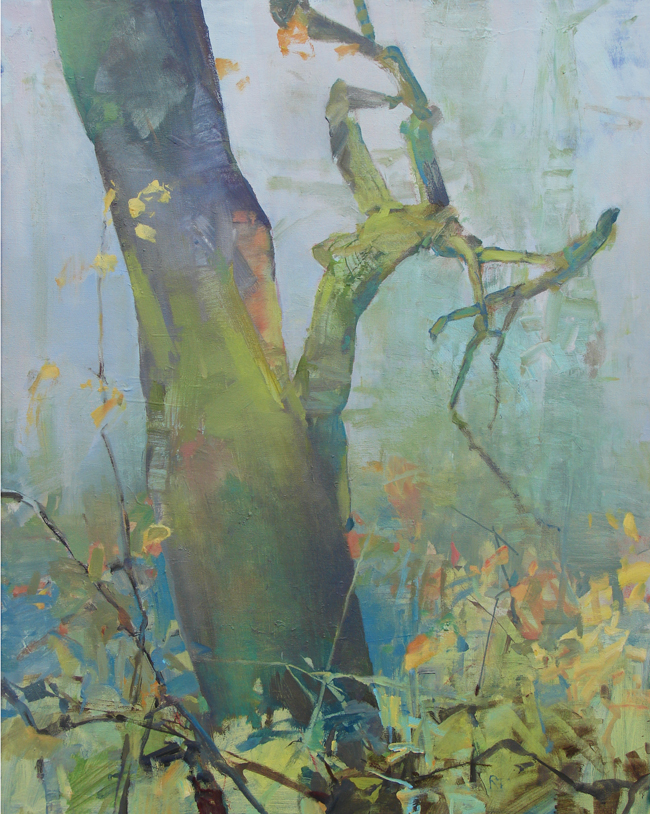 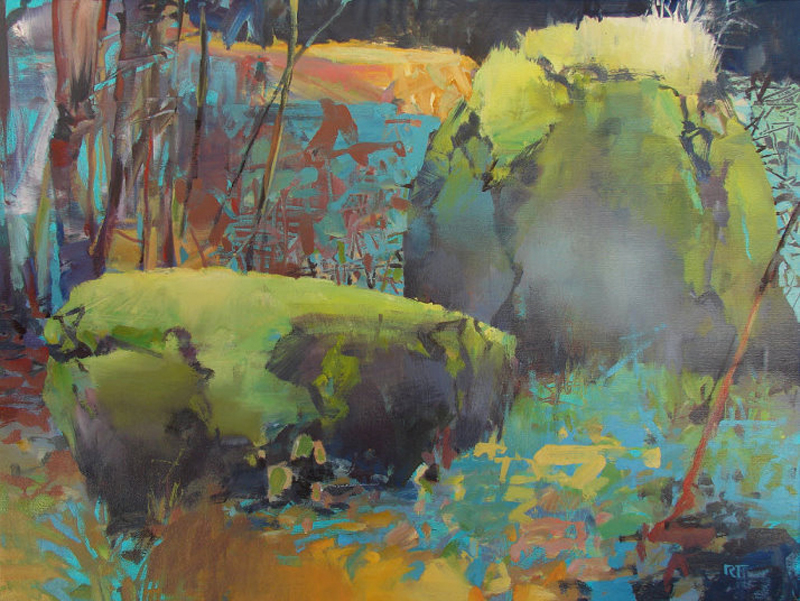 Stones by the Trail oil on canvas 18x24

When I posted a few watercolors of Georgia O`Keefe`s recently I learned I wasn`t the only one curious about the paper she used. Betsy Chang had written a librarian at the Museum of Modern Art in New York inquiring as well. She received a pdf file with several O`Keefe reproductions and an exhaustive analysis of her materials and methods. I thought it was fascinating but suspect only artists would care. If anyone would like to see it, I`ll be happy to forward it.
The answer I was looking for is this - watercolor cartridge paper!
Now, if someone would please tell me what that is?
I have to be careful, I can get really obsessed with papers. Any paper and way past rational. What I would kill for is some of the exact paper our money is printed on. I know it has a high linen content and is obviously tough as hell. I bet watercolor would be sensational on it!

For those older artists I mentioned in my last post, those returning to their creative natures again, here is a video by Ira Glass, the man behind the wonderful radio show 'This American Life'. He has some comforting words about the disconnect between taste and execution. He is talking about writing but it could just as well be painting.


Work for sale in my studio

I found your blog and work a couple of weeks ago and have been enjoying both!

Can't answer the paper question exactly but maybe this will help a bit - cartridge paper is what we use for drawing here in the UK, it comes in various weights and is usually sized for wet media, these days at least. And yes it does take watercolour pretty well, depending how heavy it is. You get a lot of granulation and it is good for wet in wet I find. Also good to draw on over the colour.

Often it is named for counties - for example I use Norfolk cartridge 210gsm - and it's named like this because originally it was used to wrap gunpowder for muskets, and would have presumably been made locally.

As for what it's made of - well these days I don't know if it can be got made of linen fibres but I doubt it, it's usually made of rag and wood pulp, and is inexpensive for that reason.Texture wise it's almost the same as what is described as vellum in the USA.

I'll send you some samples if you like - and not mind handing your address over to a total stranger!

Wow! Randall. What an amazing story about the elderly woman from Boise. What a serious commitment to your art and to art itself for her to go through so much to meet you and acquire some of your work. Perhaps her heirs could donate the three pieces to a museum in Boise.
Of your work posted here, I am most surprised by the second piece with its electric blue/yellow combinations, and I can't recall seeing anything quite like that in your work, but it is very appealing to me. You draw out the beauty in nature in the most delightful ways.

I wonder how you'll respond to her children's question. Is hard to believe they'd part with them. I like the idea of museum donation. My Dad painted a couple large oils....my sister donated them to Community Warehouse's Estate Store. Now I wish we still had them for the grandchildren who knew him.